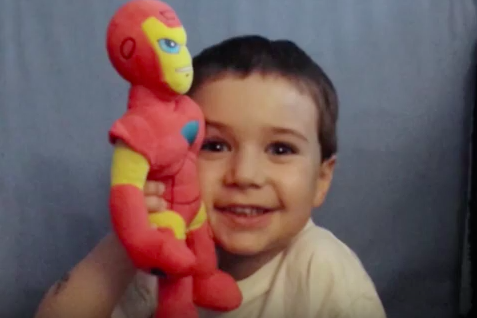 Max Levy was diagnosed with hemophilia A as a baby.

Max Levy, 5, was diagnosed with hemophilia A as a baby and has been a patient at the Children's Hospital of Philadelphia for most of his life.

"Max has had hemophilia his whole life," his sister Zoe says in a note posted on their CHOP donation page. "We found out about it when he was 9 months old, and he had to wear a helmet every day for three years.  Just last year he got a port — a metal disk in his chest, like Iron Man. Now we call him Iron Max."

When Marvel learned of Max's story, they decided to draw him into the latest edition of the “Invincible Iron Man” comic book, dressed in an Iron Man suit, CBSPhilly reports.

"I get to be inside one of them, and on the next page, I’m blasting somebody," Max told CBSPhilly anchor Ukee Washington.

"I thought he was going to be a kid on the street who Iron Man flies by," his father Dan told CBSPhilly. "Not only is Max in there, he’s in the suit, he’s saving the day, he’s fighting Dr. Doom. It’s pretty awesome."

Even Dad gets a little cameo. At the end, Marvel tells readers [the] story of the real Max, writing, “…heroes belong in comics. We couldn’t resist giving Max a cameo in ours.”

Each year, Max and his 8-year-old sister Zoe put together a charity event picking brackets during March Madness to raise money for CHOP.

This year, they took their fundraising to the next level, with their own Hearts 4 Hemophilia calendar.