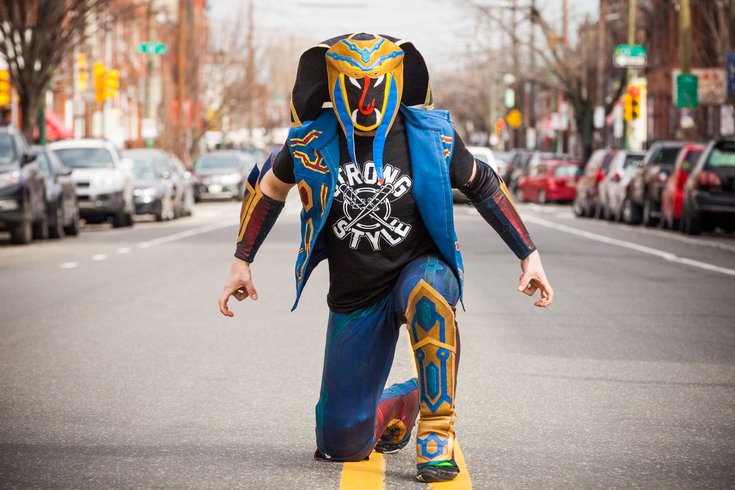 Masks reveal more than they conceal. In the world of professional wrestling, where characters must evolve to survive, that’s exactly the point.
Welcome to the world of Chikara, where men wrestle women and zany gimmicks abound. Take, for instance, the ever-losing comic wrestler El Hijo del Ice Cream, whose name translates to "Son of Ice Cream." He wears a mask with a cone jutting out from the chin. Elsewhere, frogs, snakes, and even a one-legged wrestler fight in a battle of wits and physical skill.
Chikara professional wrestling promotion started as a school that grew out of the Wrestle Factory in Allentown in 2002, and moved to Philadelphia three years later under owner Mike Quackenbush. The Chikara Wrestling Factory school now stands at 2300 Arena in South Philly, formerly the ECW Arena, while performances tour the country.
In Chikara, the focus is on drama. The outcome of a match is predetermined by a creative team led by Quackenbush, but wrestlers can improvise if the crowd demands it. And characters can emerge from just about anywhere. To stand out, your look has to be memorable; it needs to entertain. But most importantly, it needs to tell a story. 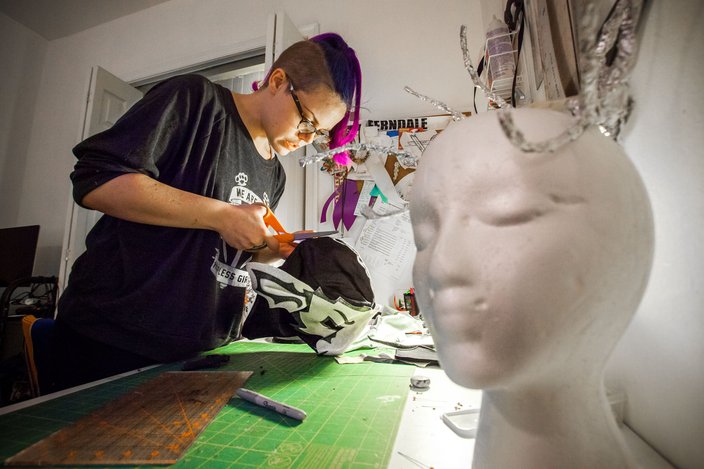 Kate Nickerson designs wrestler costumes in her home studio./Thom Carroll
Kate Nickerson, 24, works full-time making wrestler gear as part of Closet Champion, the costume couture business she started out of her South Philly home in 2014. Nickerson's fiancé, who trained at Chikara in 2006, is acclaimed wrestler Ophidian the Cobra, who performs as an anthropomorphized snake. Ophidian, who asked that his real name not be used, practices a form of wrestling called Mexican lucha libre. “It’s more of an exhibition of finesse and style and who can make the crowd ooh and ahh,” Ophidian told PhillyVoice.com.
In lucha, the mask rules all.
“A [mask] adds a sense of power to a person. It makes them larger than life,” Ophidian said. Masks are usually worn by “high-flying characters,” like his Ancient Egyptian snake-man, a tecnico, or good guy, with hypnotic powers.
Masks communicate a distinct identity to fans, who buy so heavily into it, they don’t want to see him for who he really is. Twitter accounts featuring pictures of unmasked wrestlers are reported as spam until removed; Ophidian, for his part, does not maintain any personal social media accounts under his real name. It’s a way of paying respect to the fans and the craft itself.
In 2014, Ophidian's gear and three masks were stolen from his front steps. Returning the favor, his fans stepped in to fund $1100 toward a new mask in record time for performances abroad. 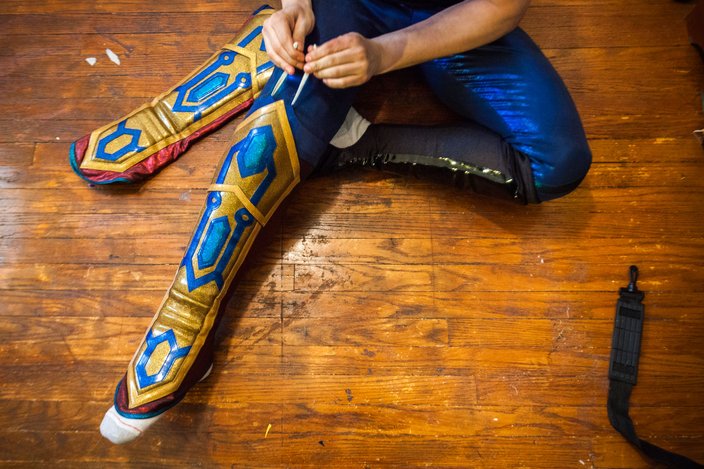 Blue, gold and red are the signature colors of Ophidian the Cobra./Thom Carroll
Ophidian’s mask is Ophidian himself, so while he goes through masks as often as he “molts” (in real life, old masks are sold to fans to finance new ones), his mask never changes unrecognizably. Nickerson has designed two, although the finished product is made by a designer in Japan.
“You’re never going to see him in a mask that doesn’t look like a cobra face,” Nickerson told PhillyVoice.com, “but there was a time when he was in masks that didn’t look like that and by taking that iconic thing away, it makes the fans turn on you, which is a way to communicate dissonance.”
Just as a mask is integral to character, a character is integral to a storyline. Chikara decides who is going to win or lose a match, but its flow happens in the moment. It’s similar to improv comedy, where performers have freedom to move.
A character develops based on his progress in a storyline. Who he loses to or wins against determines the relative position he’ll be in to compete in the next round. Nickerson designs costumes for nearly half of Chikara’s performers. She tailors a wrestler’s outfit to their current role. 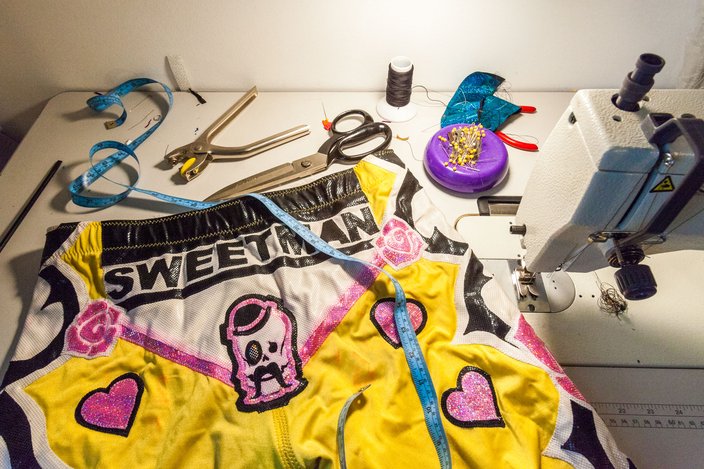 A costume under repair./Thom Carroll
"I’m really adamant about having a person or a character’s past evident in their current costume. Like, I make it a point to know either where they’re going in storyline, or where they’ve come from in storyline, or both," Nickerson told PhillyVoice.com.
Two characters, Hallowicked and Frightmare, were allegedly brainwashed to turn against their teammate UltraMantis Black in the Spectral Envoy; instead of ripped-up T-shirts and baggy pants in flashy black-and-orange or green, Nickerson put them in streamlined red and white ensembles, and switched out their horror-movie cool monster masks – Hallowicked, a deviant pumpkin head – with Dia de los Muertos, or Day of the Dead, inspired masks. “They look good,” Nickerson said, “but they don’t look like good guys. They don’t look like faces [good guys] anymore.”
New characters like Qefka the Quiet, whose gimmick is a mime, also benefit from a distinctive look. “The main purpose of the costume is to portray my character,” Qefka, who also asked not to go by his real name,  told PhillyVoice.com. “The base is the black and white mime stripes, and after that establishes that I am a mime, Kate and I were able to add ‘loud’ flourishes, like my colorful suspenders and my ostentatious cape."
Colorful elements relay the inherent comedic value of a mime theme, which can help shape action (slamming into invisible walls) and storyline (an opponent might try to make him squeal, and depending on whether he’s a rudo – bad guy – or good, the crowd may cheer him on or boo with pleasure).
Whether good or bad, Chikara’s wrestlers use their looks to their advantage. Crowds believe in their masked heroes, and what they see in the ring — how they perceive a character’s transformation — will bring them back for another round.
Catch Chikara wrestlers at the First Energy Stadium in Reading, August 28, 2015. You can find tickets here.