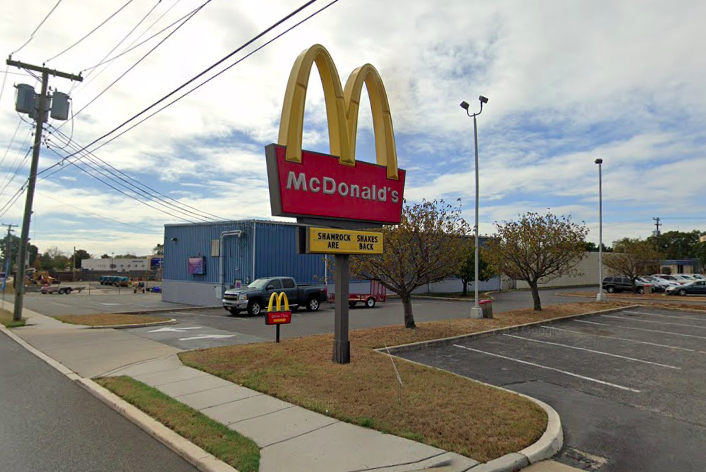 Amanda Bordois says a burger she purchased at the McDonald's at 1027 North High St. in Millville, N.J. had poop stains on the wrapper. She and her daughter have sued the fast food joint in Cumberland County Superior Court.

A Millville family has filed a civil lawsuit against a local McDonald's in South Jersey where they allegedly purchased a burger with poop stains on its wrapper earlier this year.

Amanda Bordois filed the six-count civil suit last week in Cumberland County Superior Court, claiming she and her family were sickened and suffered emotional distress after they went to the fast food franchise on Jan. 13.

According to the suit, Bordois went the the McDonald's drive-thru at 1027 North High St. and discovered the horrifying stains when she and her family returned home.

Bordois claims she and her daughter began to eat french fries out of one of the bags, but when the girl reached in to remove a burger, "she noticed a brown substance all over the wrapper of the burger and on (her) right hand," according to the lawsuit, which is embedded at the bottom of this story.

The family first suspected the stain must be grease, but soon found themselves overpowered by the stench of feces, the suit continues.

"To their disbelief and shock, Plaintiffs realized what they had just ingested was human feces which was touching their french fries in the same bag," the lawsuit says, alleging the daughter vomited.

Bordois attempted to contact the McDonald's multiple times, but could not reach anyone by phone. She then called police, who came to the home and "observed what appeared to be feces on the wrapper of a burger in the bag," Millville police officer Kevin Gandy wrote in his report.

A photo of the wrapped burger and the brown stain can be viewed at the Asbury Park Press.

When police visited the McDonald's, the manager allegedly said it was "not possible" for feces to have gotten on the bag because he packaged the items himself and would have noticed a fecal substance on his gloves, APP reported.

The Cumberland County Department of Health performed an inspection of the McDonald's on Jan. 15, finding a repeat violation of "handwashing conducted in a timely manner," according to the suit.

Violations at the restaurant were corrected on site and the McDonald's was able to maintain its satisfactory rating.

"Serving safe, high quality food is always our top priority and we take this claim seriously," John Durante of JDKD Enterprises, the owner and operator of the restaurant, told APP in a statement released by McDonald's USA. "We have taken the appropriate steps to investigate this matter and have been unable to substantiate the claim."

Bordois and her daughter are represented by Castellani Law Firm in North Field.

"In this era of the Covid-19 pandemic, the public should be made aware of unsafe food handling practices of a global franchise such as McDonalds," the law office said in statement. "What was once thought of as a fond childhood memory pulling up to the Golden Arches for dinner with mom and dad has turned into a traumatic experience of being exposed to food touching a wrapper smeared with feces."

The family is seeking unspecified compensatory and punitive damages in addition to attorney and legal fees.