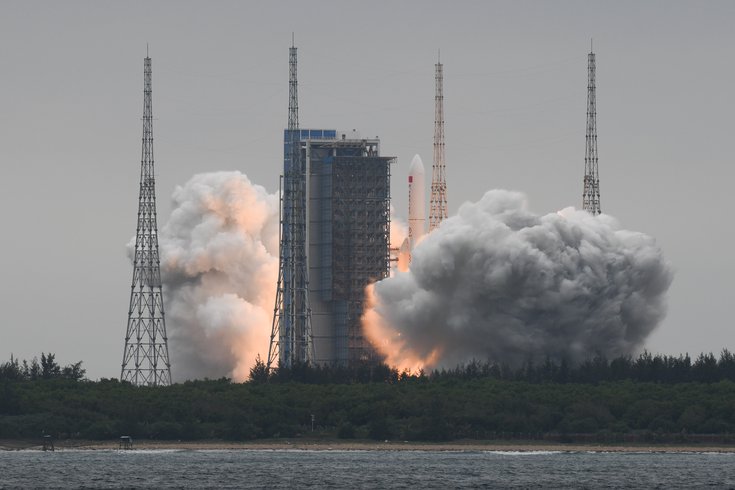 The Long March 5B Y2 rocket, carrying the Tianhe module, blasted off from the Wenchang Spacecraft Launch Site in south China's Hainan Province on April 29, 2021. One of the rocket's launch cores did not deorbit and is expected to reenter Earth's atmosphere in the coming days.

The massive core of a Chinese rocket launched into orbit last week is hurtling out of control above Earth and could make a crash landing in the coming days. The odds are minuscule, but the Philadelphia area is among the places mentioned as a possible crash site.

Last Wednesday, China launched its Long March 5B rocket to serve as the core module of its planned Tianhe Space Station. The core stage of the launcher detached from the module as planned, but there doesn't appear to have been a safe maneuver to deorbit the core's remnants for a controlled re-entry.

"This core stage is now also in orbit and is likely to make an uncontrolled reentry over the next days or week as growing interaction with the atmosphere drags it to Earth," SpaceNews reported. "If so, it will be one of the largest instances of uncontrolled reentry of a spacecraft and could potentially land on an inhabited area."

Ground-based radars have detected the 100-foot tall core passing through low-Earth orbit at varying altitudes between 106 and 231 miles, traveling at more than 15,840 mph. The object has been classified and is now being tracked by the U.S. military.

Eventually, the core will be dragged out of orbit by Earth's atmosphere, where much of it will likely burn up and the remnants will crash. Given the core's high rate of speed, it has been orbiting Earth about every 90 minutes, making a reentry point and crash site highly difficult to predict.

Weather forecasts over the coming days suggest that if the core were to crash somewhere in the United States, several locations appear to be in its path, according to Weatherboy.com:

It is too early to say with a high degree of certainty where the rocket or its debris will ultimately crash, but forecasts show if an impact were to occur in the United States, the eastern U.S. would have the highest odds of seeing impact. Chicago, Buffalo, New York City, Boston, Philadelphia, Dover, Atlantic City, Richmond, Gainesville and Jacksonville are among the eastern U.S. cities the rocket is expected to pass over and perhaps crash into.

Last May, China launched an experimental Long March 5B rocket capsule whose core similarly tumbled out of control, eventually scattering in the Atlantic Ocean and near the coast of West Africa. Debris was found in the village of Mahounou in Cote d’Ivoire on the Ivory Coast. About fifteen minutes prior to that crash, the core had traveled directly over New York City and Los Angeles.

Incidents like these are not unusual in space aviation, though the size of the Long March 5B rocket and its core add to concerns about an unpredictable crash.

In March, the second stage of an American SpaceX Falcon 9 rocket didn't deorbit as planned, putting on a fiery display over the Pacific Northwest in cities like Seattle and Portland. The Chinese rocket core currently in orbit is about seven times larger than the second stage of the SpaceX Falcon 9, according to Harvard astrophysicist and orbital object tracker Jonathan McDowell.

The Long March 5B core that crashed on the Ivory Coast last year, damaging several homes, was the largest craft to crash to Earth since the U.S. Skylab left debris over the southern Australian town of Esperance in 1979. It had largely disintegrated upon reentry, and fortunately no one was harmed.

Other instances have not ended as safely. In 1996, China's launch of the Intelstat 708 commercial satellite went awry, causing severe damage in a nearby town and leaving at least six people dead and 57 injured, according to the Chinese government. U.S. officials have questioned the official number of casualties, according to SpaceNews.

Unsafe and under-regulated space launch practices in China have given the nation a competitive advantage in space launch technology, at the cost of potential destruction.

"The point to be made here is that more than 20 years after the Intelsat disaster China continues to play a game of 'space booster bingo' where the squares contain forests, rivers, farms and towns," SpaceNews reported on China's lax regulation.

The odds of a calamity over the next week are fairly long, considering that most of the Long March 5B core will likely disintegrate upon reentry and there is far more ocean and uninhabited land than there are populous areas for the remnants to strike. But as space aviation continues to evolve and ambitions grow, the chance of a disaster in situations like this one will remain greater than zero.