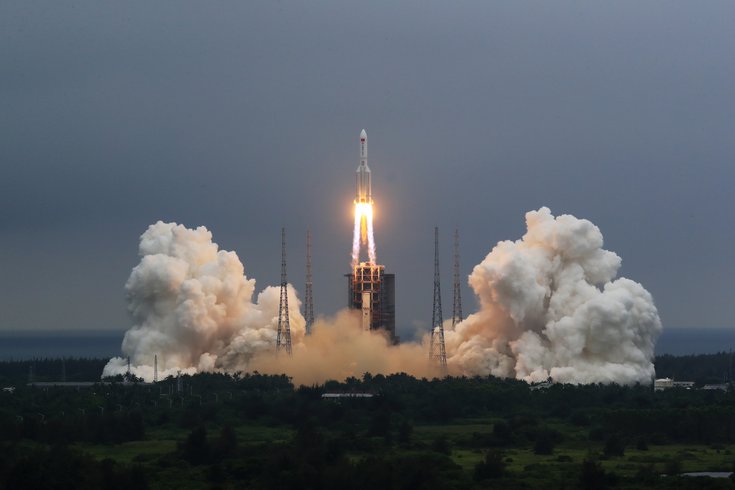 The Long March-5B Y2 rocket, carrying the Tianhe module, is shown above blasting off from the Wenchang Spacecraft Launch Site in south China's Hainan Province on April 29, 2021. The main stage of the rocket's launcher detached and went into uncontrolled orbit around Earth, with a crash landing now anticipated early Sunday, May 9.

The countdown is on for the massive core of a Chinese rocket to make its reentry to Earth this weekend, more than a week after it detached from the Long March 5B spacecraft and began an uncontrolled orbit around the planet.

At 100 feet long and about 22 tons, the exact timing of the space debris' crash landing remains a rough estimate, but the non-profit Aerospace Corp. now believes the core will reenter Earth's atmosphere just after midnight on Sunday, with a margin of error of eight hours.

The rocket that launched on April 29 will serve as the core module of China's first permanent space hub, Tianhe Space Station. The main stage of the rocket's launcher detached as planned, but instead of reentering Earth's atmosphere on a controlled path to the ocean, the debris (classified as CZ-5B Rocket Body) went into orbit sending it on an unpredictable crash course.

Images of the space debris have now been documented by the Virtual Telescope Project in Italy, where astrophysicist Gianluca Masi captured two observations over the past few days.

The first image above comes from a single, 0.5-second exposure taken on May 6 with the Telescope Project's “Elena” robotic unit. The telescope tracked the rocket core traveling at a blazing 0.3 degrees per second apparent motion, the organization said.

The second, colored image, taken Saturday, shows the distinct trail of the rocket stage seen from Rome, where Masi used his Canon 5DmIV DSLR and a 41mm-f/3.2 lens to combine ten 8-second frames. The bright object seen in the photo is Jupiter.

"The rocket is visible on the right side of the picture," Masi said. "As we can see from its trail, the luminosity of the CZ-5B R/B body was rapidly varying, I could easily see it flashing with my own eye. Our guess from the image is that the body flashes every 2.5 seconds or so. The rocket moved from the upper right to the bottom."

Officials tracking the rocket have said its orbit varies between altitudes of 106 and 231 miles above Earth's surface. The object has been observed traveling at speeds of more than 15,840 mph. For reference, the common cruising altitude for most commercial airplanes is between six and eight miles above sea level, with cruising speeds between 547-575 mph.

Aerospace Corp. has projected the rocket core likely will crash into the Pacific Ocean after it has passed over several cities in the United States, potentially including the Philadelphia area. The chances of the debris landing in inhabited territory and causing destruction are extremely remote. Most of the object likely will disintegrate as it reenters the atmosphere and descends to Earth.

Jonathan McDowell, an astrophysicist at Harvard University, told The Guardian he expects that some of the rocket core will survive. If it were to crash on land, McDowell said it would be the "equivalent of a small plane crash scattered over 100 miles."

Last March, after China launched another an experimental Long March 5B rocket capsule, pieces of a core stage scattered in the Atlantic Ocean and near the coast of West Africa, where debris was found in the village of Mahounou on the Ivory Coast.

Earlier this year, the second stage of an American SpaceX Falcon 9 rocket did not de-orbit as planned, putting on a fiery display over the Pacific Northwest in cities like Seattle and Portland.

The Chinese rocket core currently in orbit is about seven times larger than the second stage of the SpaceX Falcon 9.

Given the unpredictability of the rocket core's reentry time and location, it's not yet clear how well — if at all — its crash to Earth may be captured by telescopes and other imaging technology.

An estimated 200 to 600 orbital reentries of space debris occur each year, according to the Australian Space Academy. Only about 20% of these instances include masses large enough to partially survive reentry and drop debris that reach Earth's surface.