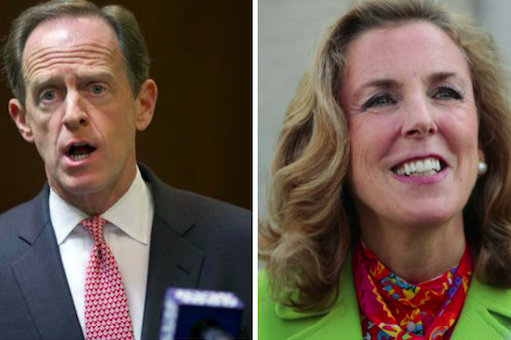 With one week remaining before the 2016 Pennsylvania Senate election, Democratic challenger Katie McGinty has landed 12 points ahead of incumbent Republican Pat Toomey among likely voters in the latest poll conducted by Franklin & Marshall College.

In a poll of 863 registered Pennsylvania voters from Oct. 26-30, McGinty came out with a 43-33 lead among registered voters and a 47-35 lead among likely voters. A full 16 percent of those polled remained undecided in a race some believe could run late into the evening.

Considered one of the Senate's most endangered Republicans, Toomey remained distant from Trump throughout his re-election campaign, opting to emphasize issues such as protecting steel workers, promoting coal and natural gas development and eliminating the city of Philadelphia's sanctuary city policy.

During the debates, Toomey questioned whether McGinty possessed the independence and policy building skills to grow Pennsylvania's economy without raising the cost of living for the middle class. McGinty argued that Toomey has failed to bring significant results to Pennsylvania over six years and has become enmeshed with special interests.

On Tuesday afternoon, the Toomey for Senate campaign dismissed the F&M poll and questioned its methodology.

“This poll is so laughably wrong, and so wildly off from every other poll that exists, that we will shed our long-standing policy of not commenting on public polls in order to call it what it is – worthless," said campaign spokesman Ted Kwong. "It’s silly that anyone would take it seriously.”

This isn't the first poll in this race to deviate from what has been reflected in other polls. In late August, an Emerson College poll put Toomey seven points ahead of McGinty, who had leads anywhere between one and seven points in other polls at the time.

The tracking poll at RealClearPolitics currently has McGinty with a 4-point lead over Toomey.

Where the state's still-undecided voters stand on key issues — and whethey they turn out to vote — could be the decisive factor Nov. 8.