Clarification: Webster B. Todd Jr. was identified in an earlier version of this story as the chairman of Compassionate Sciences due to inaccurate information from the company. He stepped down at the end of 2016. He was succeeded by Jack Burkholder, a banker and consultant.

Marijuana is a growing part of New Jersey's medical economy and a nondescript medical marijuana dispensary in Camden County is leading the way.

The Compassionate Sciences Alternative Treatment Center in Bellmawr is rapidly growing in size, due in part to offering topical oils, oral lozenges and other products not available at the state’s other four licensed dispensaries.

Nearly 11,000 people in New Jersey use medical marijuana for 13 designated medical conditions, one of which is a terminal diagnosis. But that could rocket to “hundreds of thousands” of additional patients if 45 pending requests to expand covered conditions – especially those causing chronic pain – are approved by the state, according to according to Ken Wolski, a nurse who leads The Coalition for Medical Marijuana New Jersey.

Only pain from cancer and HIV/AIDS can be treated currently with cannabis, but expansion to new chronic pain categories could help curtail the demand for painkilling opioids and heroin, Wolski contends.

In fact, one proposed new category would allow marijuana to be used to treat opiate addiction, much as the more addictive drug methadone is now used, he adds.

Permit applications in Pennsylvania close on March 20. The eight-county region in southeastern Pennsylvania which includes Philadelphia will receive the most permits – 10 for dispensaries and two for growers/processors. Individual dispensaries can have up to three locations. They will not open until 2018.

Seventeen medical conditions are covered under Pennsylvania law, which does not permit smokeable marijuana. 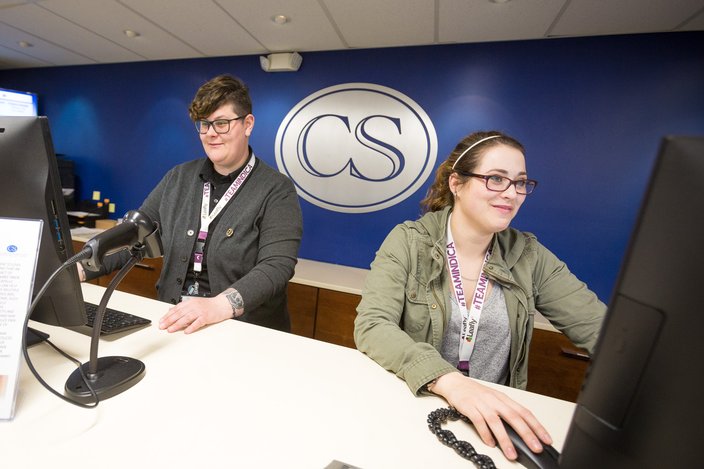 Christina Hawkins, left and Amanda Capoferri are dispensary associates that assist in providing the product to customers.

New Jersey’s entrance into the medical marijuana business has been slow, too.

Compassionate Sciences, now the busiest dispensary in the Garden State – five are active – didn’t even open until the fall of 2015. But the dispensary's growth took off a year later when the state approved its formulation and sale of lotions and lozenges, unavailable elsewhere in the state. None of the other dispensaries in New Jersey seem to have an interest in following the company into medicalized marijuana products.

Compassionate Sciences produced the most cannabis in New Jersey, 885 pounds, according to the state’s recently released annual report for 2016, when it reported 2,762 customers. That number is closer to 3,000 now, says Craig J. West, the dispensary operations manager. Nearly a third of its clients come from the northern part of the state.

Combined, the New Jersey’s dispensaries sold nearly 2,700 pounds of cannabis in 2016 to more than 10,000 patients, with the Camden County operation accounting for nearly a third of all medical marijuana users. 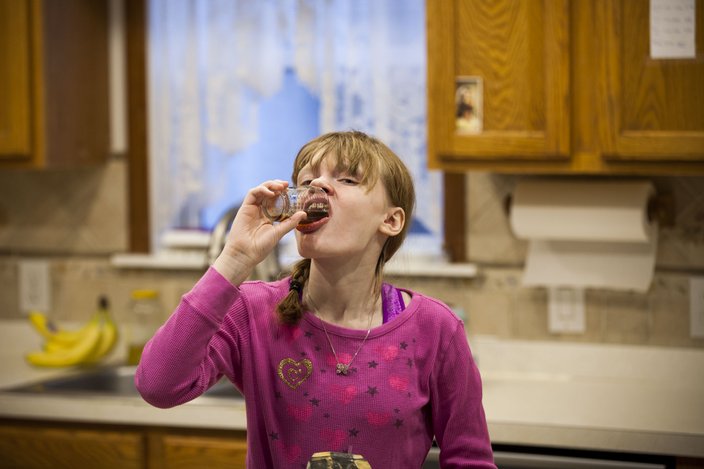 Genny Barbour takes a dose of medicine just before dinner in November 2015.

'BELLMAWR IS A GODSEND'

Genny Barbour is the dispensary's best-known customer. A high school student, she is perhaps the highest-profile medical marijuana user in New Jersey and one of the most prominent in the country. She is profoundly autistic and prone to epileptic seizures, which are mitigated by the marijuana mixture she drinks regularly.

She came to prominence because her lawyer and father, the late Roger Barbour, successfully fought to allow her to medicate while in school, a groundbreaking change in state regulations. When the Barbours first won that battle in late 2015, the family traveled to a dispensary in Woodbridge to buy marijuana to turn into an oil form that was easy for Genny to drink.

After it opened, the Barbours started buying from the dispensary just off Route 42 in Bellmawr, which is nearly 40 miles closer to the family's home in Maple Shade, Burlington County. Genny’s mom, Lora Barbour, is a fan.

“Bellmawr is a godsend,” she says, but not just because of its proximity. “They go the extra step.”

She says the facility always has the specific strains she needs – different strains are said to have different therapeutic qualities – for the concoction she makes at home for Genny. That was not always true when she drove more than an hour to Woodbridge.

The facility’s employees were supportive when her husband died unexpectedly last year, she adds.

And Genny has done well with using the facility's products, reducing and eliminating some prescribed pharmaceuticals and going as long as 11 days without a seizure.

Without the medical marijuana, Genny had seizures at least every other day, and sometimes every day, even when on large doses of multiple anti-seizure pharmaceuticals, her mother said. 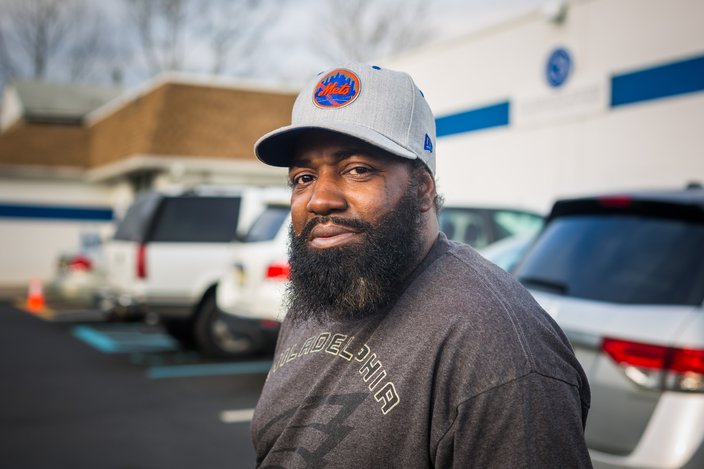 Rodney Dean Sr. of Sicklerville, Camden County, visited Compassionate Sciences recently to purchase the lozenges, which he says helps with anxiety, back pain and sleep apnea.

He says he’d previously been addicted to Percocet, a mix of acetaminophen and oxycodone. But now he never feels as if he’s “jonesing” for a marijuana lozenge in the way he did for the opioid painkiller.

But despite proven medical applications, a stigma remains with marijuana, says Lora Barbour. That would change if talk of legalizing cannabis in both New Jersey and Pennsylvania ever moves forward, she adds.

On the federal level, where marijuana is illegal no matter the use, President Donald Trump has signaled he favors allowing regulation of pot by the states. But his attorney general, Jeff Sessions, has made his disdain for the decriminalization of marijuana well-known.

West, the operations manager, says Compassionate Sciences' huge growth is based on its willingness to spend money to take on “tremendous expenses” by adding growing space and building its capacity to formulate specialty products in bulk. 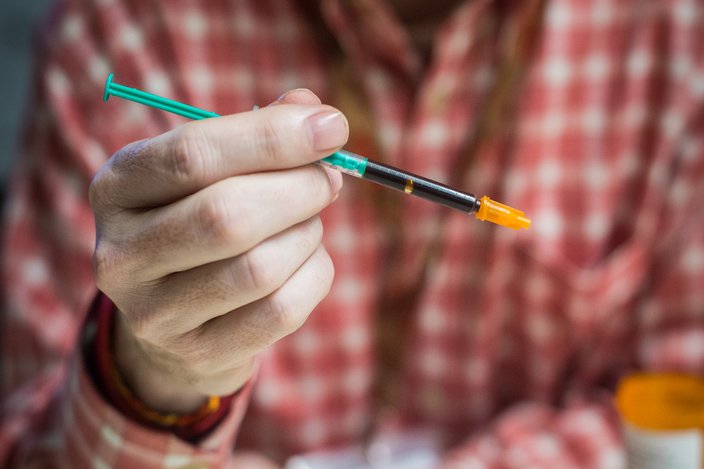 Webster B. Todd Jr., the brother of former New Jersey Gov. Christie Whitman, was chairman of Compassionate Sciences from its inception until the end of last year. He was succeeded by Jack Burkholder, a banker and financial consultant.

While declining to discuss the company's financials, West said the company has grown from 20 employees to 50.

Growing rooms have doubled – from two to four. And three more are expected to be in operation by the end of 2017, adds West, with hopes to keep expanding.

But there are bottlenecks.

Right now, it takes two weeks to schedule a required consultation to begin getting prescriptions filled at Compassionate Sciences because of strong demand. But the other bottleneck in New Jersey is doctors: Only about 2 percent of the state’s doctors – 500 or so of 28,000 physicians – are registered to prescribe medical marijuana. Medical marijuana requires a doctor's prescription.

There are several reasons for physicians' reticence. 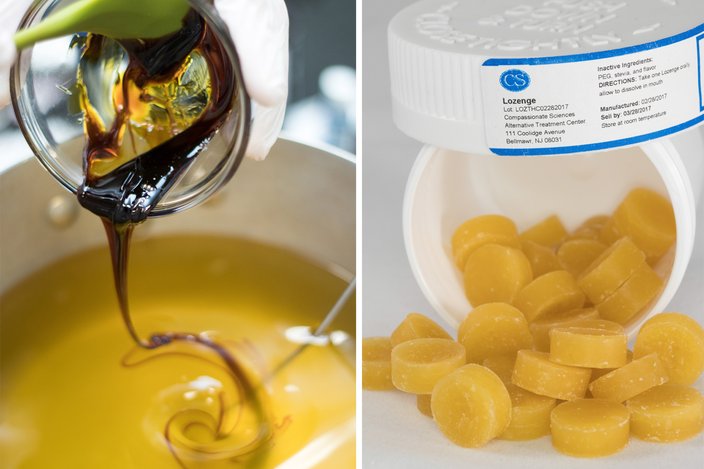 In the process of producing a topical cannabis lotion, marijuana extract is added to a lotion, left. A jar of cannabis lozenges.

NOT EMBRACED BY DOCTORS

That’s a byproduct of the fact that many states don’t allow marijuana medically, even though 28 states and Washington, D.C allow it. Just eight states and the District of Columbia have legalized recreational use.

And the feds, while not actively pursuing medical marijuana users and suppliers, still have laws on the books making it illegal to use as a palliative medicine.

Many doctors sign up just to prescribe it to one or two patients, says West, but drop out, presumably after a terminal patient dies. 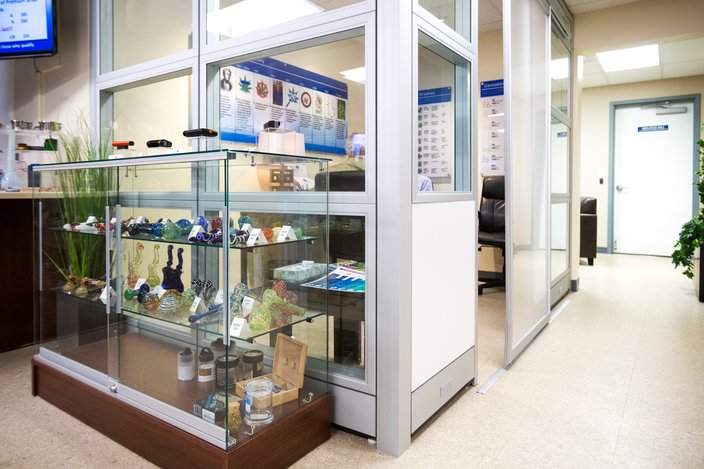 New patients go through a consultation to determine which type of medicine is best for their needs.

“We do a lot of education and outreach here,” says West, pointing out the percentage of prescribing docs in New Jersey was only about 1 percent about a year ago.

"Approving the recreational use of marijuana would change that," says Wolski of the Medical Marijuana Coalition. "The registry was not required under the law.

"Approving the recreational use would make medical marijuana like an over-the-counter drug" and bring down the price, he adds.

That's not an insignificant concern since all medical marijuana purchases in New Jersey are in cash because the federal law won't allow for the use of charge cards. Plus, medical marijuana prescriptions are generally not covered by health insurance.

"There's always been a lot of resistance in the medical community," adds Wolski, a nurse licensed in Pennsylvania. He pointed out that while nurses in the Keystone State supported the use of marijuana, physicians did not.

"It's not taught in medical schools. There's a lot of ignorance of an emerging science," he says.