These 'next tier' rescue pups are on a mission to mend 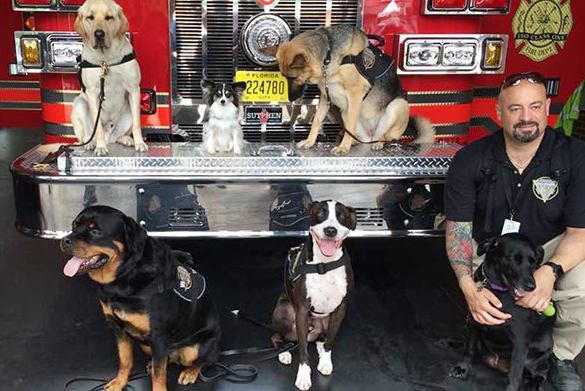 Shortly after the shooting at Pulse Nightclub in Orlando last summer, dogs from the Tri-State Canine Response Team in South Jersey were deployed. Unlike many of the therapy dogs that were initially used to comfort victims and their families, these pups were sent specifically to comfort the first responders, the police and firefighters who were the first on the murder scene, and the first into the nightclub that tragic night in June.

“Our job is next tier,” explains Ann Rosenberg, a handler with the non-profit serving New Jersey, Pennsylvania and Delaware. 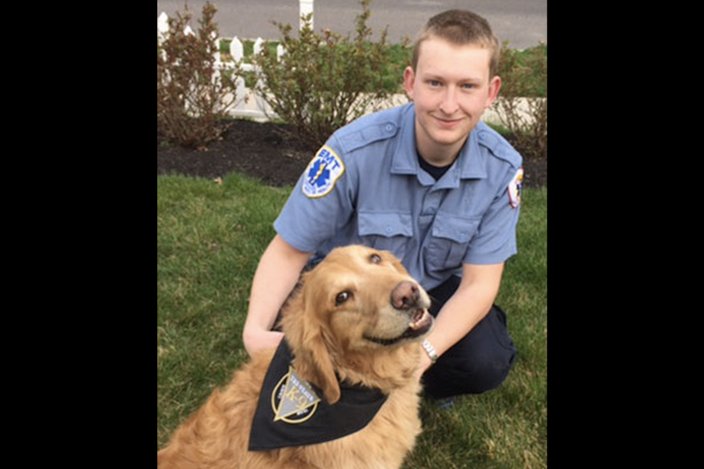 Teams comfort victims of disaster, catastrophe or violence and foster resilience and self-efficacy.

Rosenberg, a former well-known breast cancer surgeon, has become a kind of spokesperson for the progressive new program along with her pack of four very friendly dachshunds.

Meeting people at the most stressful times of their lives has been something Rosenberg’s been doing for more than 40 years in oncology. Having treated an estimated 25,000 women with breast cancer during her long career, she admittedly wanted to find a new way to reach people. Her love of animals would ultimately lead her to Tri-State.

As a handler with the canine response team, Rosenberg and her dogs visit a wide range of people who may be in need of animal-assisted activities, therapy and crisis response. The group, officially created two years ago by Andrea Hering and Janice Campbell, has been assisting first responders from the start by using the dogs to provide emotional support during particularly challenging times like the group witnessed in Orlando.

These days, it’s not unusual seeing four-legged friends walking the halls of J. Fithian Tatem Elementary School in Haddonfield, N.J. The school partnered with Tri-State to provide support in the event of an emergency, as well as to assist students with special needs throughout the year.

“Interaction with a gentle, friendly pet has significant benefits on physical and mental health,” Principal Karen Schultz wrote in an e-mail blast to the school community.

The program actually goes beyond emergency preparedness and encourages students to read to the dogs to help improve literacy skills. Schlutz says students are more confident and focused. And faculty has taken a liking to the dogs, as well, finding time to recharge with them between classes.

“We go out with a purpose and a job”

On Rosenberg’s 50-acre farm in Mt. Laurel, N.J., dogs and horses comingle in a densely wooded enclave just minutes from the Ben Franklin Bridge. When she built the farm in the early 1990s, she was raising Jack Russell Terriers, high-energy dogs that her children loved. She said it was a dream come true to have so many animals on the farm. Being a smart kid who was often bullied for it led Rosenberg to develop a bond with animals early on. It’s a relationship that has stuck with her and informed this latest chapter in her life.

“When I found comfort,” she says, “I frequently found it with my horse.”

Over the years, she’s raised sheep, goat and pigeons, all while taking care of women diagnosed with breast cancer and raising two children as a single mom.

When Rosenberg met Hering, she knew that the next life project would focus on therapy dogs. Hering, a longtime dog trainer, had been interested in combining her experience with mental health and social work into a nonprofit for therapy dogs. To make it a reality, she would need handlers like Rosenberg who had the time and enthusiasm to get engaged.

“It has comforted me,” says Rosenberg, “and allowed me to stay engaged in community service.”

At Rosenberg’s home last month, Hering was busy training a dachshund puppy to eventually become a therapy dog with Tri-State. Snow is still piled up on the porch from the last storm, but the space where the dog is being trained is flooded with sunlight. Hering teaches commands like retrieval and sitting for starters. The dog will eventually learn tactics needed for serving during traumatic events.

It may be hard to believe, but within a few short months, this energetic pup will be ready to assist in some of the most urgent situations in the region and beyond – the likes of which we have all seen during the aftermath of both 9/11 and Hurricane Katrina.

“We look to see how well dogs can handle stress,” explains Hering. Provided that a dog is capable of learning commands and behavior, just about any dog – rescues and purebreds alike – could be considered good candidates for the program.

Provided that a dog is capable of learning commands and behavior, just about any dog – rescues and purebreds alike – could be considered good candidates for the program."

“These folks were petting and holding the dogs between calls,” says Rosenberg. The teams of handlers and dogs also visit businesses, mental health facilities and libraries.

On a recent trip to the Cherry Hill Library, the dogs spent time with autistic children. Kids who typically have challenges reading emotional cues gently passed around and handled the small dogs. Through the exercises, the children were able to connect with the dogs while also sharing the experiences with each other.

“The dogs know that they are working,” says Rosenberg.

“We go out with a purpose and a job.” It’s her job, she admits, to know when the dogs are tired and need a break.

“They actually come home exhausted,” she admits. “It may not seem like they are doing a lot, but they are.”

Hering, who’s been working with dogs for about 10 years, says she and Campbell both recognized this need for a new breed of therapy dog.

“We couldn’t put basic therapy dogs into some of these emergent situations,” she explains. “Within the last year we have assisted more than 7,500 people.”

It takes about $1,300 for each therapy dog to be trained. The cost includes training both dogs and handlers, and outfitting each with vest and leads.

With about 35 teams available (a team consists of one dog and one handler) the Jersey-based nonprofit has the ability to deploy nationally. A few of the handlers actually come from law enforcement and first responder backgrounds, like the retired state policeman and firefighter who have joined Tri-State.

When the teams visited the first responders in Orlando last year, Hering says, “They were thankful they weren’t forgotten about.” And during a more recent trip to the Katz Jewish Community Center in Cherry Hill in the wake of receiving a bomb threat, Rosenberg says people there didn’t realize they needed help until it was offered through the dogs.

Hering adds, “Dogs are able to do something humans cannot. Dogs break through.”