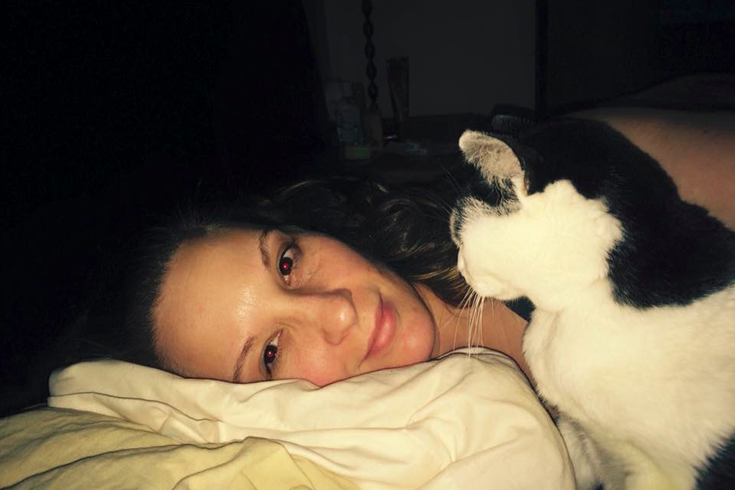 Suzanne Smith, shown here with her Chloe, has provided a foster home for upwards of 200 cats over the course of the past decade or so.

Suzanne Smith wanted to make one thing perfectly clear before talking about how she’s become known as a crazy cat lady.

Over the course of the past decade or so, she’s taken upwards of 200 felines into her home as a foster parent of sorts who’s cared for them, and helped them find new, loving homes.

She declared she’s no animal-world hero, though, just a couple days removed from jumping down onto the Market-Frankford El tracks at the York-Dauphin station – she asked first which rail she should avoid touching – in an effort to save yet another wayward feline.

She deemed that attempted track rescue – another brave soul slowed down an approaching train – to be a “whole new level of cat-lady adventures.”

She also didn't want anybody to go overboard about it.

“I don’t want people to think I’m the savior of all cats, like I’m the ruler of the cat world,” she said in her East Falls home on Monday. “I’m one of many, many people doing this, and some of them have done more than I have.”

What she’s done, though, is noteworthy, compassionate and deserving of attention, so she’ll just have to bear with this story.

Smith’s cat-lady story starts back in the late 1990s and early 2000s when she was a graduate student studying animal/human interaction at the University of Delaware.

Knowing that she missed her cats from home, her roommates bought her a part Siamese, part Rex kitten that was the runt of its litter in 1998. Her name’s Chloe. She still lives with Smith today.

That gift meshed perfectly with studies, and thesis research, that exposed her to the benefits of pet therapy at area nursing homes.

“Cats would just find me, which isn’t hard since they’re all over the place. Soon, I became known as the ‘Cat Lady of Fishtown.’ ” – Suzanne Smith

Upon graduation, she continued those efforts through her job at J.P. Morgan Chase, where employees volunteered for Global Days of Service initiatives.

She hasn’t stopped since.

Her time in Newark, Del., got her into the fostering mindset, but she ramped those efforts up when she moved to Philadelphia’s Fishtown neighborhood. Upon arrival, a cat named Pumpkin was already in her backyard looking for a friend.

She took Pumpkin in after gaining her trust. She wouldn’t be alone.

“Cats would just find me, which isn’t hard in Fishtown since they’re all over the place,” Smith said, after spending a draining day battling the Philadelphia Parking Authority over some tickets. “Soon, I became known as the ‘cat lady of Fishtown.’ ” 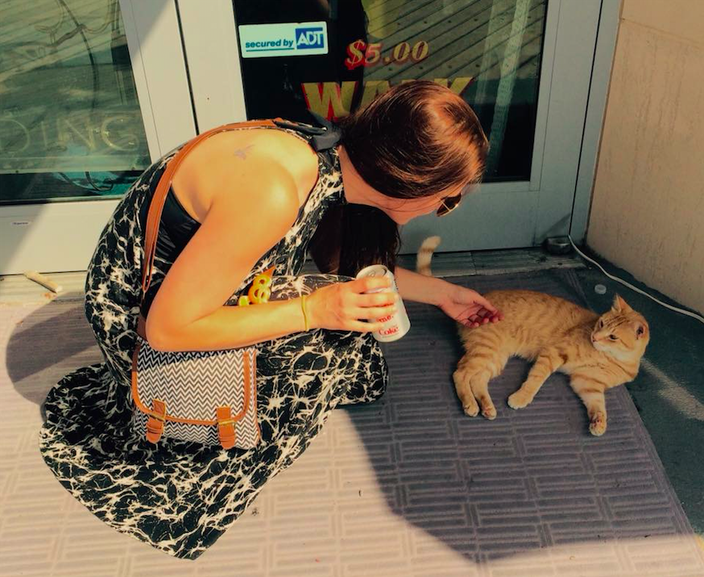 Suzanne Smith pets a cat that she met on the Ocean City Boardwalk.

Smith so enjoyed taking care of cats she reached out to area animal rescue agencies and posted neighborhood message boards about her experience bringing them in, caring for them and connecting them with caring families.

“There was a growing number of acquaintances and friends who would refer people to me. It took on a life of its own through 2005 and kept growing more and more,” said Smith, who was always an animal person growing up in the Lehigh Valley. “I was just doing it on my own, but I’d meet the big players (in animal rescue circles). There was a whole network out there, and I got to being good at it."

It got to the point where some called her “the cat flipper.”

With cats from shelters, she had the built-in benefit of them providing them with care, shots and the like. With the ones she found on her own, she shouldered the burden, and still does to this day.

That includes the black cat who crossed a North Philadelphia street and looked at Smith as she was wondering when she’d bring another cat home to replace one just adopted.

“A lot of times, the cats find me, or through a network of people, because there are a whole lot of people doing great work for cats out there,” she said as a cat she found in her East Falls alley last Friday walked by the couch. “The cats are everywhere if you want to see them.” 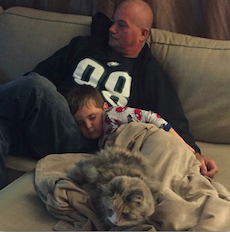 A former foster cat pictured with his new family.

She can’t put a firm number on the number of cats who’ve come through her homes in Fishtown and East Falls, estimating it anywhere from 100 to 150 to 200 or more.

But her system of getting word out about cats needing homes has remained the same, as has her penchant for staying in touch with many of the families who’ve taken them in.

The parting, she said, can be “bittersweet” if she’s had time to connect with the cats, which sometimes she doesn’t. She shared a picture she’d just received of a Russian Blue kitten someone adopted in 2006.

“’George is still energetic and affectionate. I’m so happy fate brought me to your Craigslist ad,’” the adoptive parent wrote. “That’s what makes it worthwhile for me.”

The most cats she’s ever cared for at one time came when she had two different mothers with litters of kittens in addition to her pets.

“That was insane,” she said, noting that someone she asked to stop by and check on them “couldn’t handle it.”

'I KNOW WHAT THEY NEED'

Currently, there are seven, with one heading off to adoption any day now, another two whose owner “went AWOL” and several permanent residents. Allow her to introduce them:

I've got four cats of my own.

Carly was rescued from being a porch cat on Carlisle St. in North Philly.

Pumpkin, my former permanent outside cat who greeted me the day I moved in back in March of '05 and who I snagged when I moved to my new place in East Falls.

And, little Fiona, rescued as a mean, angry, fur ball from behind a school at Broad and Pike. She's blind in one eye and goofy as hell, but she's a sweetheart and a failed foster. I briefly rehomed her, but was secretly hoping it wouldn't work out. And it didn't! So now she's my Fifi!

“It’s easy to get overwhelmed, because I can’t say no. I realized I had to set limits when a friend told me I had too many cats,” Smith recalled. “There’s a sense of fulfillment because I’m helping animals in need.

“I love it. I have a special bond with cats. I know what they need and when they need it. There’s a sense of doing good.”

“It’s easy to get overwhelmed, because I can’t say no." – Suzanne Smith

Shelters appreciate actions like that because it opens up space for them. She also says that anybody can do what she does, though “it’s easy to make excuses not to do it.”

One of those excuses – of course – is the cost that accompanies caring for all those cats. Expenses can add up with cat food costing 50 cents a day per cat. Veterinarians will often help with the cost for established foster families.

To help offset that cost, Smith launched a GoFundMe page more than three years ago. It’s brought in $2,660 of a $4,000 goal thus far, but any little bit helps her help the cats.

“Any money donated would be used for costs incurred while capturing, providing veterinary care for, and general care (food, flea and tick products, treats/catnip, toys, etc.) I have lots of people who can vouch for my animal rescue/cat fostering work and am happy to answer any questions you might have/provide any proof. I'll even send you cats on demand. I recently re-homed a kitten all the way out to St. Louis, Mo.”

The name of her fundraising mission? Not Your Typical Cat Lady.

No, Suzanne Smith sure isn’t, but it sums up her mission perfectly.