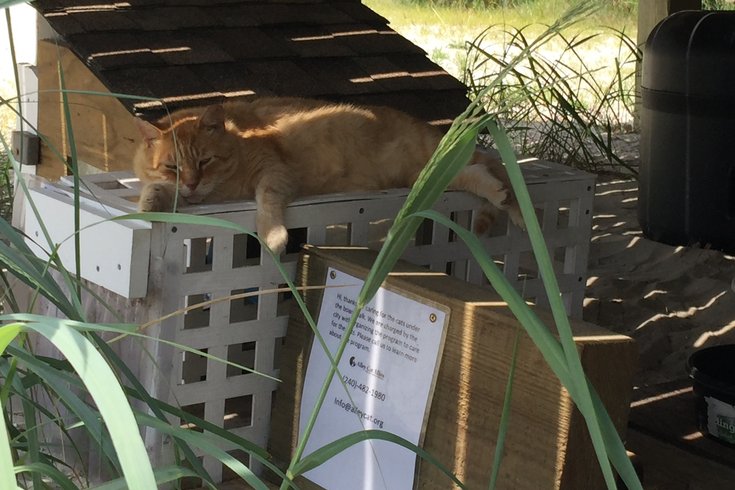 Julius is one of an estimated 100 felines living in 15 colonies under the Atlantic City Boardwalk.

It’s another hot summer day at the Jersey Shore, but Julius found a nice cool spot to comfortably chill.

He’s called this area near the Ripley’s Believe It or Not! attraction on the Atlantic City Boardwalk home for the past 10 or 11 years.

Since Julius can’t talk – he’s an orange cat, after all – nobody knows precisely how long he’s been here.

Since a team of advocates and volunteers made it its mission to care for Julius and the dozens upon dozens of other feral cats living in colonies under the Atlantic City Boardwalk, though, it’s known that he’s well-fed, sheltered and unconditionally loved.

The cats don’t all make themselves visibly known often, but if you know where to look, they're there. To that end, there's a slew of YouTube videos of tourists and locals meeting the cats. (See here, here, here and here.)

A.C.’s “Boardwalk Cats” have a storied history as a unique attraction in this resort town to the point that “Boardwalk Cats Project” signs along the ocean-side walkway urge people to neither feed the cats nor abandon felines.

They were installed by the Alley Cat Allies, an advocacy group that’s tended to the population for the past 17 years. The group’s contributions center on that TNR effort, and its impact is such that Mayor Don Guardian helped design the signs.

Since 2000, cats have been taken to veterinarians. There, the strays are spayed or neutered, ear-clipped for identification purposes and then returned to the Boardwalk in lieu of euthanasia. 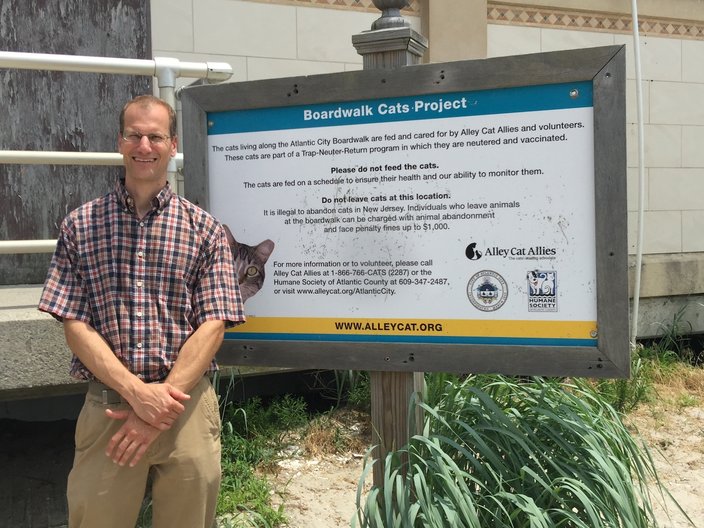 Matthew Wildman, senior programs manager and cat behaviorist with Alley Cats Allies, stands in front of one of several signs telling visitors not to feed the cats along the Atlantic City Boardwalk, Thursday, July 13, 2017.

He discussed the impact of the effort on the feral-feline population that, left unchecked, could become a community nuisance but has instead become a source of compassionate pride.

“There’s no real end point for the project. We’ll just keep working to provide the best quality of life for these cats that we can.” – Matthew Wildman, senior programs manager and cat behaviorist for Alley Cat Allies

He also introduced us to Julius who, despite being feral, is as friendly as can be, hopping off the crate he calls home for meow-inducing strokes and cuddles.

When the TNR effort started, there were an estimated 300 stray cats who called the Atlantic City Boardwalk-area home. Nobody knows for sure; that’s a best-guess estimate.

As it’s progressed through the years, Wildman said that population has dwindled to roughly 100. They live in 15 “colonies” spread along a two-mile span of the Boardwalk.

The Allies estimate the overall reduction at 72 percent, but can’t exactly account for others that have been illegally abandoned.

Since they’re territorial, the cats tend to stay relatively put, meaning volunteers will see the same felines in the same area where they have shelter with straw on the ground, insulated food stations protected from bird invasion by walk-in refrigerator-like mini-door flaps.

With the help of many animal-welfare organizations, Alley Cat Allies stepped in to prevent the cats from being trapped and killed. Due to the TNR effort, no new litters have been born, leading to the population decline, Wildman explained.

The cat population has thrived to the point that shorthaired Inky is still thriving near the shuttered Trump Taj Mahal site at the age of 19. Inky’s the oldest. The second oldest, a friendly 18-year-old feline named Genie, recently died.

Others, said Wildman, have lived many comfortable years thanks to the TNR mission. In fact, they may do better than their domesticated peers.

He noted that the Boardwalk cats aren’t amenable to adoption. 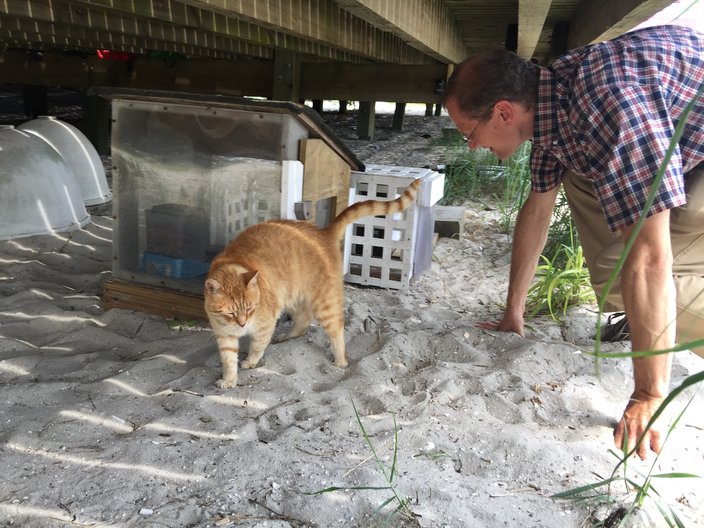 Volunteers not only maintain the cat colonies but, twice a year, clean under the Boardwalk so the overall habitat remains relatively clean. Wildman said the city, Boardwalk business owners, residents and visitors have been nothing but supportive.

“Atlantic City is a leader in this around the country,” he said, noting the group encourages volunteers to urge other municipalities to follow suit in lieu of resorting to euthanasia, a strategy formally adopted by some 650 cities or towns and in place on a grassroots level in many more towns. “It’s just good public policy."

And it's one for which he sees no distinct conclusion, despite the dwindling population.

“There’s no real end point for the project," he said. "We’ll just keep working to provide the best quality of life for these cats that we can.”

On Sunday morning, a team of Alley Cat Allies volunteers set up shop across the Boardwalk from the Taj Mahal.

They were preparing to take 125 visitors attending the Best Friends Animal Society national conference in the seaside resort on a tour of a trio of cat colonies. 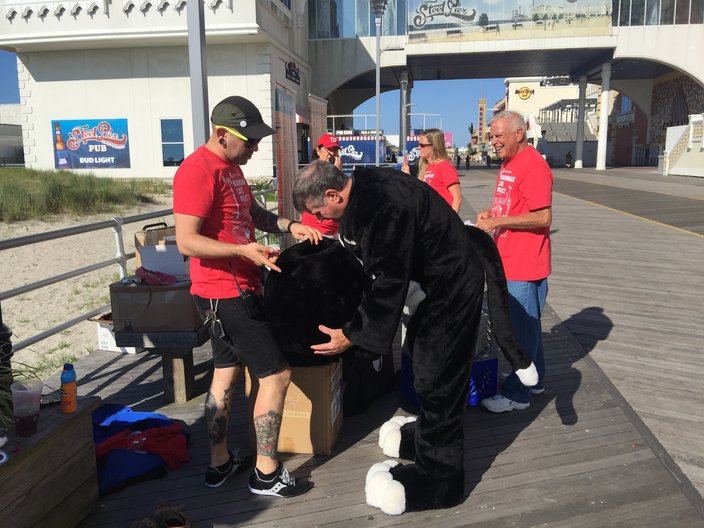 Alley Cat Allies volunteers and staffers prepare for a day of leading cat-colony tours near the Atlantic City Boardwalk on Sunday, July 16, 2017.

Among those on hand was Wildman, Atlantic City program manager Kim Kean, retired U.S. Air Force pilot Bob Draper, who sported a cat suit (complete with a fan to keep his head cool inside), and longtime volunteer Frank Hoopes.

Hoopes, 68, is an Atlantic City lifer. He comes out to the Boardwalk each and every morning to tend to colonies outside the Taj, near Garden Pier and by the lifeguard headquarters at States Avenue.

"I worked at the Taj Mahal for 25 years as a waiter at the buffet. On my half-hour break, I would walk down those front steps and see a couple feeding the cats, so I would give them a donation," explained Hoopes who once had five cats of his own at home but now just one.

"I took over the States Avenue colony and when others retired, Garden Pier and this one here," he continued. "It started as a hobby, but now I'm hooked."

With that, Hoopes was off to let fellow animal activists in on the effort that's seen Atlantic City become a leading example of humans caring for feral cats.