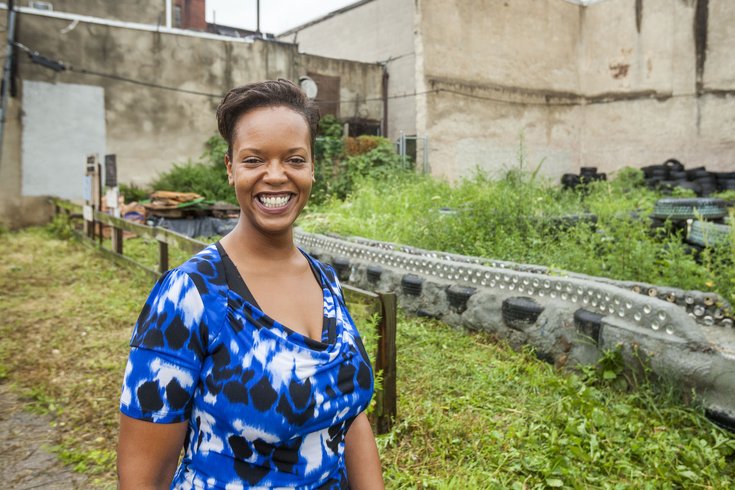 Rashida Ali-Campbell on the property of Earthship Philadelphia in the Haverford North neighborhood of West Philadelphia. The earthship will house her nonprofit LoveLovingLove, a holistic health service organization that, among other things, offers fresh food and runs a 'de-escalation room' program.

Ali-Campbell, who founded her holistic health services nonprofit LoveLovingLove in Delaware County in 2007, is opening what she calls a "de-escalation room" in a low-income neighborhood in West Philadelphia, at 675 N. 41st St.

The general concept is as follows: The room, equipped with a vetted counselor and decked out with art, a waterfall, comfortable chairs, fresh foods and speakers with soothing music, serves as a way to teach adults how to manage their stress and, most importantly, gives parents a place to send their kids when they misbehave.

Why? Because she believes in compassion over condemnation.

"We believe love heals all things," Ali-Campbell told PhillyVoice. "We live in a society where we want people to 'pay,' and we look at somebody suffering as payment. But who says that punishment has to be suffering? Why can’t punishment be transformative? The whole point of punishing is to stop a behavior, not hurt them."

Ali-Campbell first tested this concept in 2009 as part of, she said, the School District of Philadelphia's Renaissance Initiative. To date, she's had de-escalation rooms implemented in Robert Morris School, South Philadelphia High School and Strawberry Mansion High School. In those settings, the room exists to de-escalate flaring tempers and serve as an alternative to suspension.

Recently, however, she's exhausted the funds necessary to keep the de-escalation room available in schools. As a result, she's only been able to continue the program as a sort of pop-up-only event at homeless shelters and youth service centers.

If the term catches you off-guard (or strikes you as aloof), that's because it's not a particularly common occurrence in Urban America -- hers will be the first to be created in a city. In short, it's an inexpensively made house built using a combination of recycled tires, cans and bottles with only a handful of construction standards (lumber, concrete, etc.) added to the mix. She built it partly out of sheer fascination with the concept, but also because of its self-sustaining nature -- with its solar- and wind-based electricity and year-round greenhouse to grow its own food -- allows her to allocate more money to the nonprofit's spectrum of holistic health services.

But more than that, it's the perfect space to host her first permanent de-escalation room. 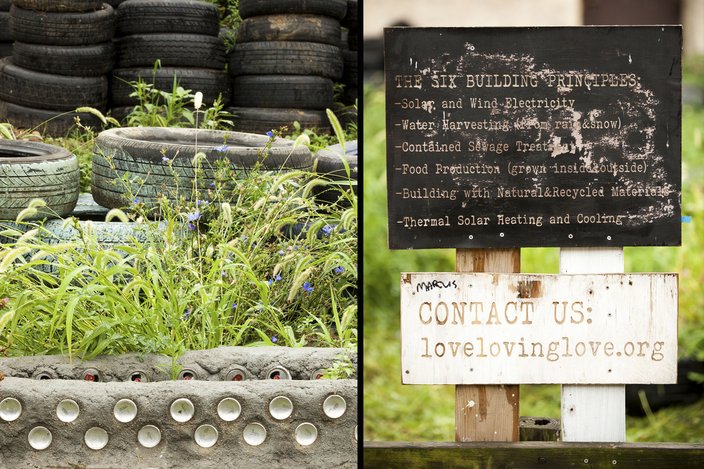 The vacant lot at 675 N. 41st St. in West Philadelphia that will host the earthship when it's built this fall. The tires (left) are used to help insulate the structure; the sign (right) displays the six principles of earthships. The project cost $27,000 in total. (Thom Carroll / PhillyVoice)

With the consent of parents, kids can be sent to the earthship's de-escalation room for limited-time sessions of about 50 minutes.

Its purpose is twofold: To give her a chance to eventually conduct an impact study (and thus have a solid foundation for funding), and to get to the core of why kids misbehave in school settings at all.

"One of our current problems is, ‘Why are children coming to school and misbehaving in the first place?’" she said. "It’s difficult to serve them if we don’t know the problem. Bringing them into the earthship, we have time to get to the root of the crisis or trauma causing the misbehavior."

Shakyla Jackson, who lives at 41st and Aspen streets, just around the corner from the soon-to-be earthship, told PhillyVoice that she looks forward to using the community's de-escalation room when she needs it for her son, but would really like to see it in her son's school.

“When my son gets suspended, I'd rather they give them another chance -- tell him to go the room and then come back [to class]," she said. "I want them to stay in school. Because you know when they call a child to the principal’s office, they also want a parent to come pick them up. ... They need something more than calling the parent, because parents can't get there every day."

The big idea, Ali-Campbell said, is to get more disciplinarians -- teachers, parents or otherwise -- to recognize that simply sending a child away without a plan doesn't get to the core of a behavioral problem, or set the foundation for future improvement. The de-escalation room aims to arm kids -- anyone, really -- with stress-management tools. 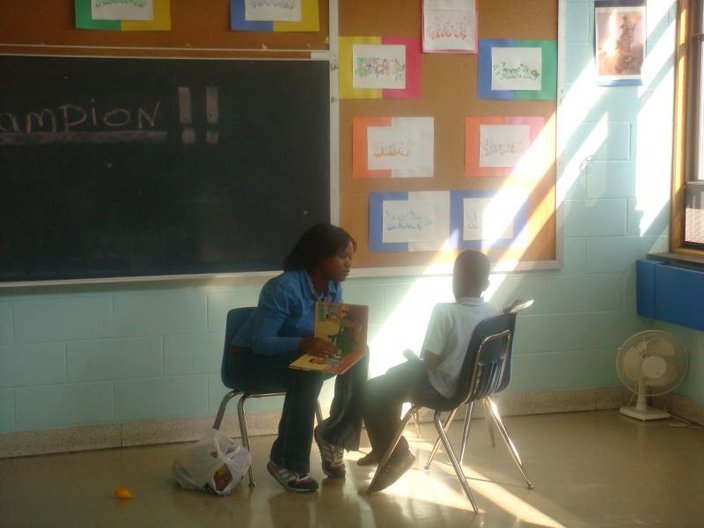 LoveLovingLove Counselor Tamara Ali, left, reads to a  Robert Morris School student in one of the organization's de-escalation rooms. If a child settles down before the allocated 50 minutes are over, Ali-Campbell said, children are encouraged to catch up with lessons they may be missing. (Contributed Art / Rashida Ali-Campbell)

Tamara Ali, a volunteer counselor for LoveLovingLove's de-escalation rooms, told PhillyVoice that a lot of the activities that happen in the room -- the yoga, the music, etc. -- are about distraction. She said they teach kids to manage stress, but also to recognize it and understand what triggers it. Her primary goal as a counselor is to give them the management skills to not have to come back, but she also takes pride in providing a form of isolation that's more enjoyable than, say, in-school suspension.

"Any environment that's less stressful is going to be good for [the kids]. That's why art and gym are so successful," she said. "Because schools often don't have those programs or even a counselor in their school, our program allows them to have an environment to de-escalate their stress. ... But it takes two -- we have to work with the teachers, who can also use these techniques in their classroom."

She said it was a hard blow when she had to leave Robert Morris School because of funding hurdles. Kids were disappointed, and she felt like work was left to be done.

"Teachers loved it and principals would ask us to come back. ... But the schools would say it’s not in their budget," she said. "We’re hoping we can get funds from the School District itself, but with the funding crisis, it seems impossible." 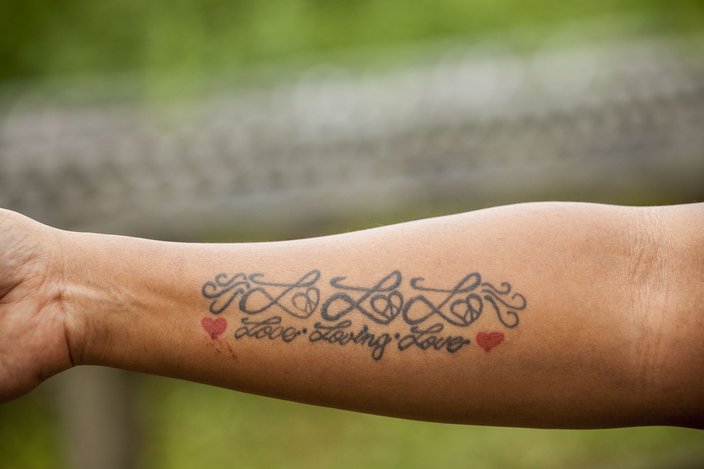 Rashida Ali-Campbell's "LoveLovingLove" tattoo. She got the tattoo as a daily reminder to accomplish something every day for her holistic-health-services nonprofit of the same name. (Thom Carroll / PhillyVoice)

"We built the earthship because we knew we could use it as an office that could sustain itself, that way any money we make can go into our services," Ali-Campbell explained. "We’re not buying the food we’re giving out; the building grows that. So, now we can put money into stipends for young people and hiring volunteers."

Ultimately, LoveLovingLove and its de-escalation room's success will depend on its ability to prove its effectiveness to school administrators, as well as explain to West Philadelphia community members that its earthship-turned-de-escalation-room is not a daycare center, nor just a museum for sustainability.

Regardless, both the earthship and the de-escalation rooms admirably exist to break cycles -- one to break a cycle of abuse toward the environment, and the other to counter a perpetuated idea of what forms of discipline actually make for a well-behaved, de-stressed adult.

"I could either have a child come to me today or 19 years from today as my purse-snatcher," Ali-Campbell said. "I want to be part of the solution.”