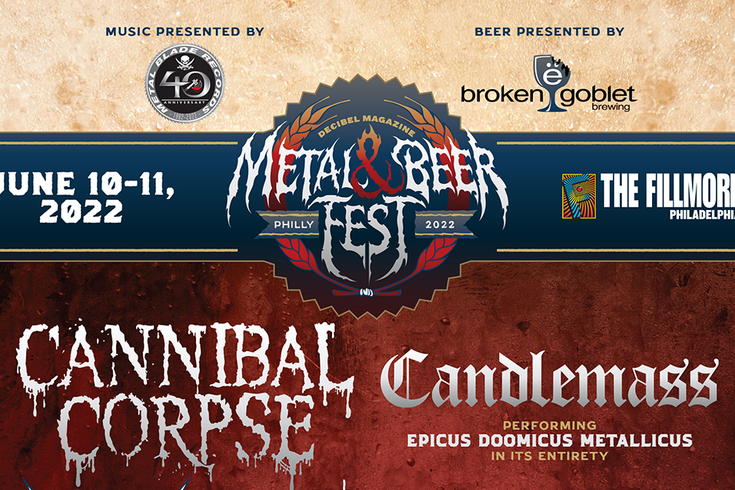 Decibel Magazine's Metal & Beer Fest will come to the Fillmore in Fishtown between Thursday and Saturday this week.

There's nothing quite like headbanging to your favorite bands after pounding back some brews with your buds.

That's why Decibel, a Philadelphia magazine which is one of the most influential tastemakers in the world of heavy metal, decided to combine the two for their annual Metal and Beer Fest, which started in 2017.

Expect to see lots of guys with long hair, camo shorts and black t-shirts around the Fillmore, 29 E Allen St., between Thursday and Sunday for the three-night event.

The main sets will begin at 4:30 p.m. on Friday and Saturday following a Thursday "Pre-Fest" event focused specifically on progressive metal.

Cannibal Corpse, which is perhaps the most popular death metal band of all time, is the main attraction for Saturday with their 10:15 p.m. set.

On the first night, Candlemass, a Swedish band which helped pioneer the doom metal subgenre, will headline with a complete performance of their classic album "Epicus Doomicus Metallicus" at 10:35 p.m.

The Red Chord, one of the most highly-regarded deathcore acts of all time, will play their 2005 album "Clients" in its entirety at 7:50 p.m. on Saturday.

There will be breweries and bands with ties to the Philadelphia area at both shows, as well.

Bensalem's Broken Goblet Brewing, one of the event's main sponsors, will be joined by Callowhill's Love City Brewing, Downingtown's Victory Brewing Co. and the Brimming Horn Meadery based in Milton, Delaware.

Soul Glo, a socially conscious hardcore band which is one of the most popular acts to rise from the new generation of Philly's scene, will play on Friday at 6:50 p.m.

All Else Failed, one of the longest standing acts from that scene, will play on Saturday at 6 p.m.

The Silver, another Philly band which combines black metal with genres like shoegaze and post-hardcore, will play at 4:30 p.m. on Saturday.

Additionally, Full of Hell, which has some members from Central Pennsylvania, will play at 6:50 p.m. on Saturday and Pittsburgh death/doom act Derekta will play at 6 p.m. on Friday.

Two types of tickets are currently available for purchase through LiveNation.

"Just Metal" tickets don't include any free beer and cost $35 for Friday or Saturday. Those looking for unlimited brew samples can buy "Metal and Beer" tickets starting at $90. There are also two-day passes available starting at $70.

The Pre-Fest will happen at 5 p.m. on Thursday at the Foundry, which is located directly above the Fillmore. The progressive death metal band Horrendous, also from Philly, will play that show. Tickets are just $20.