A method to his Madness: La Salle grad Bill Raftery keeps it fun in booth 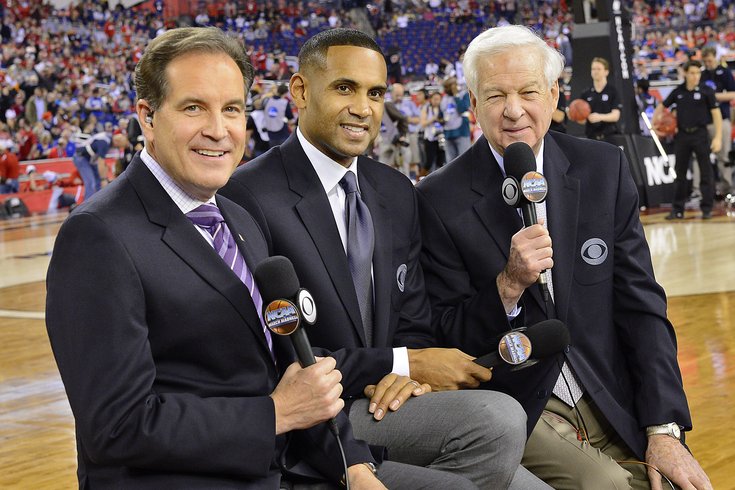 With Bill Raftery, what you see is what you get. And then some.

The CBS college basketball analyst, working his 34th NCAA tournament, will call tonight’s Villanova-Miami game and will do his second straight Final Four next weekend along with partners Jim Nantz and Grant Hill.

His humorous, easy-going nature during broadcasts mirrors his personality off-air. “Raf,’’ as he is affectionately known, has been that way since growing up in the North Jersey town of Kearny. He turns 73 next month.

Married 47 years, he and wife Joan have four children and four grandchildren. His friends are too numerous to count, not to mention those who feel they’re friends.

Jimmy Lampariello has known Raftery since he graduated from Seton Hall University, where he would eventually work closely with the SHU basketball coach. Lampariello was Seton Hall’s Sports Information Director (SID) for about four years. “One of my jobs was to buy beer and keep it on ice in the hotel bathroom. On road trips,’’ he said, “that was my job.’’

They were reunited when Lampariello took a job with the New Jersey Nets in media relations, and Raftery was hired to do their games.

“During my days with the Nets, Billy was like the Mayor of the Meadowlands. He had to shake everybody’s hand and talk to every single person,’’ Lampariello said. “Getting to his broadcast seat took forever.

“The thing people don’t realize is that he is a tremendous family person. From his son (Billy), three daughters (Christi, Kelli, Suzi), his grandchildren to his wife, he’s found time for them. And for a guy who doesn’t like to get sand in his toes, to be the perfect family man is just unbelievable.’’

“He always made time for us and always made us part of his time,’’ said the woman who grew up as Joan Fleming in nearby Montclair. “He would take the kids to the gym on Saturdays, they would go to his camps. And it’s true about the beach. He hates getting sandy. He used to put towels down all the way to his spot.’’

They seemed to be on their way to marriage after dating for a couple of years – they had met at a political dinner at the Robert Treat Hotel in Newark – “I didn’t know who the hell he was,’’ she said with a laugh.

“She finally realized I was a nitwit and we broke up,’’ Raftery said. Two years later they reunited.

“I didn’t think it would work,’’ she admitted. “He called me; he hadn’t changed, but for some reason I still loved him. So we got married and the rest is history.’’

That was five years after Raftery graduated from La Salle with a degree in History. He considered a career in teaching. His sister Rita had become a nun and their brother Fran was a school superintendent.

Basketball, however, had too firm a grasp – starting from his days at the Tappan Street Playground, to his high school days at St. Cecelia’s (“I used to joke that if I made my free throws the nuns gave me an A”), right on up to being a captain senior year on a NIT team for the Explorers.

A tryout with the Knicks failed, and what followed was a basket of career opportunities.

Working as Director of Recreation in his hometown, he went on to get his Master’s at Seton Hall and then took a full-time job at Fairleigh Dickinson. In addition to being head basketball coach, he was also the school’s S.I.D., golf coach, assistant director of athletics and he taught two classes. He also found time to be a salesman for Converse.

Hired to coach at Seton Hall in 1970, Raftery was there for the inception of the Big East Conference. Just a few weeks before the start of the 1981-82 season he informed his team he was leaving for a career in broadcasting. The losing had become frustrating, culminating after a buzzer-beating loss to Georgetown that ended with Raftery putting his fist through a glass door in the trainer’s room at Walsh Gymnasium.

No one took the news of his departure harder than his best player, Danny Calandrillo.

Now 55, the former Big East Player of the Year has remained close to his mentor. Heck, back in the day he baby-sat Raftery’s kids.

“Some people come into your life that are just pure, they speak from the heart, they care; people you can call any time, any day. I had my parents of course,’’ Calandrillo said, “but he was always the guy you could call. He’d always be, ‘How can I help?’’’

When Calandrillo’s mother turned 90 he wanted to do something special for her. Raftery got wind of it and sent his brother to their house. He plays the bagpipes.

“My mom, she was like in heaven,’’ Calandrillo said of the memory. “It was awesome. That’s the kind of guy Raf is.”

The kid and the coach first met in a bar, in Union City.

“Mob guys everywhere, cops, referees; it was after a high school game. My buddy tells me there’s a guy in the back room I had to meet. I’m thinking he’s a mob guy. But no,’’ Calandrillo said. “He says it’s Bill Raftery, the coach at Seton Hall. He’s buying beers for everybody and playing pool. I’m like, ‘That’s pretty cool; let me talk to this guy.’’’

He wound up turning down Marquette and joining the pool player.

Villanova coach Jay Wright was quoted several years ago about Raftery’s social activities. “My biggest fear,’’ he reportedly said, “is when he does a nine o’clock game at our place. You won’t see him until close to midnight, and then he won’t be done with you until about five a.m.’’

Born to Irish immigrants, Raftery grew up with parents who had a sense of humor, a sense of keeping their children humble and not interfering.

They arrived here not knowing each other, both around 20 years-old. “They were superior-educated without the education,’’ is how Raftery puts it. “I was raised in a healthy atmosphere; we always felt we had everything.’’

The Big East Conference was about to have everything when Commissioner Dave Gavitt asked Raftery if he wanted to change careers. Raftery had been thinking about TV for a few years.

He would go from Big East games to the Nets, then CBS, ESPN and FOX.

On Final Four Saturday a one-hour documentary on Raftery will air on CBS at noon. The producer is his son. The name of the show: “With A Kiss.’’ That of course is one of his signature calls during games, when a shot banks off the glass.

Nantz was first teamed with Raftery 30 years ago on CBS. Separated over the years when teamed with different partners, they’re back together.

“I feel like a kid again being around him,’’ Nantz said. “I’ve never laughed so much on air as I have with Raft. We’re having a blast. We really are.

“I’ve worked with a lot of broadcast partners, but I’ve found the best ones are the guys who are on-air exactly like they are off the air. It’s not an act. It’s who they are. When the lights come on and the broadcast begins, it is a continuation of everything else we’ve been doing from the minute we arrived on site.

“Our friendship never went away. And his good nature, no, his great nature, is a vibe that really does affect everybody. He’s pleasant with everybody, and the life of the party.’’

What you see is what you get. And then some.