This is Monopoly for Millennials, where nobody buys property and everyone is vegan 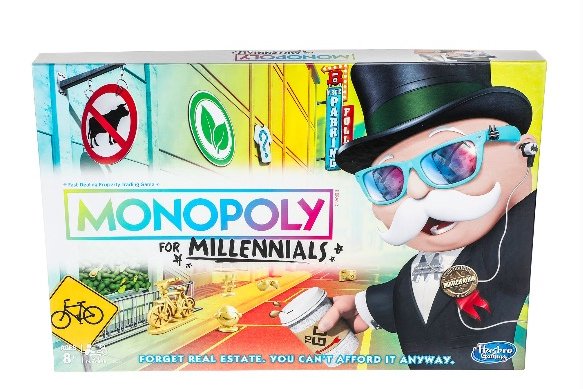 Monopoly for Millennials trades buying up real estate for buying experiences, but doesn't incorporate student debt or paying rent into the mix.

Monopoly for Millennials, the latest version of the classic board game, is a divisive one.

It's tagline? "Forget real estate. You can't afford it anyway."

Monopoly has had more than 1,000 themes since its debut in 1935. The latest gaining attention is its Millennial version, taking inspiration with Generation Y's predicament of mass student loan debt and active use of social media to create a game where real estate is not the focus for winning.

The modern take on the game trades buying up properties in favor of spending money on experiences instead. After all, according to one of the thousands of studies analyzing Millennial behavior, folks born between the early 80's and mid-90's allegedly prefer to collect experiences, such as travel or festivals, over mortgages or car payments.

There's also the fact that those "experiences" tend to be much cheaper than a down payment on a house ... but I digress.

"Instead of collecting as much cash as possible, players are challenged to rack up the most Experiences to win," reads Millennial Monopoly's description.

"Travel around the game board discovering and visiting cool places to eat, shop, and relax."

That means trips to a vegan market and meditation retreats, plus Chance and Community Chest cards that are promised to be "super relatable."

Somehow the game's Millennials find a way out of paying rent, instead constantly visiting one another. Seems like a missed opportunity to have $10 left after shoveling out cash for living with four roommates while passing over a quarter of your income to student loan payments .... but I digress. Again.

Not surprisingly, the new game has gotten some divisive reactions. Some think it's a clever take on the world in 2018, while others feel its a view of the generation that missed the mark. Many mused on what a Baby Boomer edition of Monopoly would look like.

Next, Monopoly for Baby Boomers: where you buy property for below value price, only people of color go to jail, and when you pass “Go” you get to complain about Millennials!!! pic.twitter.com/Nb8vSl79AW

As a millennial who loved playing Monopoly, I'm disappointed @Hasbro made this garbage. A game that profits off the backs of millennials while simultaneously mocking them? Must have been a Baby Boomer in charge of making it. https://t.co/8I3DGarLGx

#Millennialmonopoly = glaringly reflective of an era of where many youth can’t afford housing and have no recourse but to accept short term unstable “experiences” as a constellation prize. https://t.co/sTLhrmN9YL

From the makers of #MillennialMonopoly, it's #BabyBoomerMonopoly! Wreck the economy, vote a racist jackass into office, and then ridicule anyone younger than you as they try to resolve the clusterfuck you created!

since there’s now Monopoly: Millennial edition can i make a Monopoly: Boomer Edition?

Instead of “Destinations” each space you buy will be ways to fuck over every generation after. The player with the most tortured souls wins

So, I’m a #Millennial who can’t afford to save for a house or even rent somewhere because rent per month is more money than money I get per month and I’m single so no second income to help, but I also think #Monopolyformillennials is hilarious. #Monopoly #MillennialMonopoly

The Monopoly Millennial Edition is somehow both relatable and condescending at the same time pic.twitter.com/Fw7yW086LR

I love how offended people are over the Millennial edition of Monopoly. It's satire but more than anything, it depicts us all so well and the fact that it offends people, shows that it is, in fact, accurate. 😂

Whatever your thoughts on the game, it's at least amusing to see a monocled cartoon posing for a selfie.