Thousands of homes at Jersey Shore could be flooded, submerged by 2050

All of the New Jersey coast is at risk, new data shows, but Ocean City, Avalon and Beach Haven are notable because of the volume of new construction in danger zones 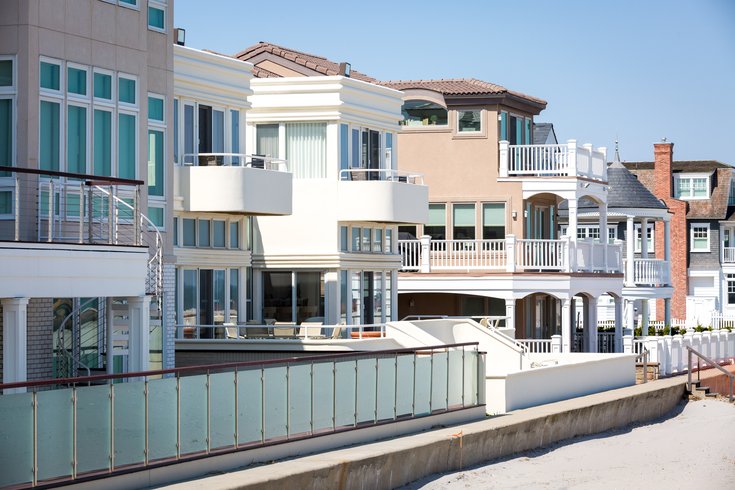 Houses along the beach in Longport, NJ.

New homeowners and prospective buyers of properties at the Jersey Shore could face extreme levels of flooding by the time their mortgages are paid off, putting billions of dollars of real estate at risk in the next 30 years.

A study recently published by Climate Central illustrates the risks of flooding up and down the East Coast and how those will build over the next three decades due to rising sea levels caused by climate change.

The researchers say their data shows flood risk should play a pivotal part in people's decisions about real estate investment at places like the Jersey Shore.

Though the potential impact of flooding by 2050 in Philadelphia is higher compared to much of the rest of Pennsylvania – rising tide levels are estimated to result in about $200 million in property damages – it is a small sum in comparison to the potential damage headed to the Jersey Shore.

The risk-zone homes along New Jersey's coast and coastal waterways represent around $190 billion in property value.

These are among about 350,000 homes across the country that are in danger of annual flooding by 2050, even if there are significant strides made to thwart global warming. If no steps are taken to cut carbon emissions, the number of homes at risk in the U.S. is closer to 385,000.

Homes built in the last few years, the mortgages of which would presumably be paid off around 2050, are also adding to the number of risk-zone properties. The greatest number of risk-zone homes built between 2010 and 2016 are in New Jersey, the study shows, with 2,682 homes valued at a total $2.62 billion, according to Climate Central's data.

Ocean City and Avalon in Cape May County; Beach Haven on Long Beach Island; and the Dover Beaches in Ocean County, North Jersey, are among the New Jersey towns with the greatest number of newly constructed homes in those risk zones in the entire United States. 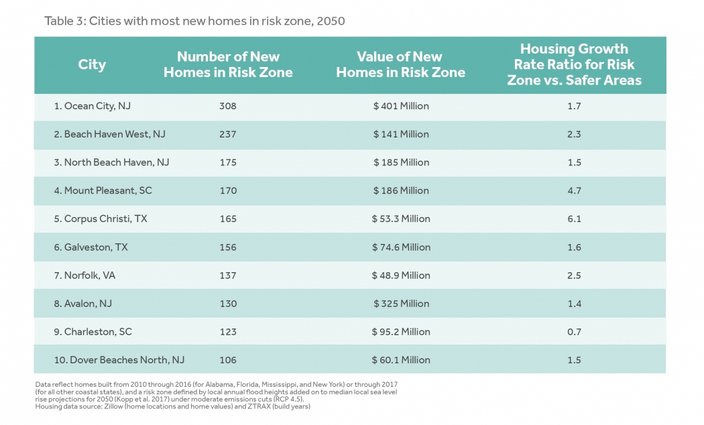 The cities with the highest number of new homes built in the flooding risk zone include several along the Jersey Shore.

Climate Central's study helps make the reality of global warming more imminent and tangible, showcasing how it could affect home buyers – not in many years from now, but today. Metro areas of New York City, Miami Beach, and the San Francisco Bay Area, all of which have notoriously high real estate prices, are among other parts of the U.S. also most at risk.

The study defined risk zones as areas where a building is on land either at or below sea level, or where floods will occur annually. Homes built in the risk areas but elevated above ground level, however, could be safe.

For homes in danger areas, the flood risks range from annual flooding to more dire partial submerging of properties. The study offers an interactive map (which is also embedded at the end of this article). Users can search the map and pinpoint exact locations to see Climate Central's flooding forecast for specific areas. The results can be toggled between high carbon emissions and medium carbon emissions, reflective of the level of actions taken to curb emissions in the next 30 years.

Check out a few sample maps below, focusing on the Jersey Shore. Each image displays the predicted risk zones, if no action is taken, for 2050. The medium-blue color represents areas that are presently dry land and are predicted to be in flooding risk zones in 30 years. 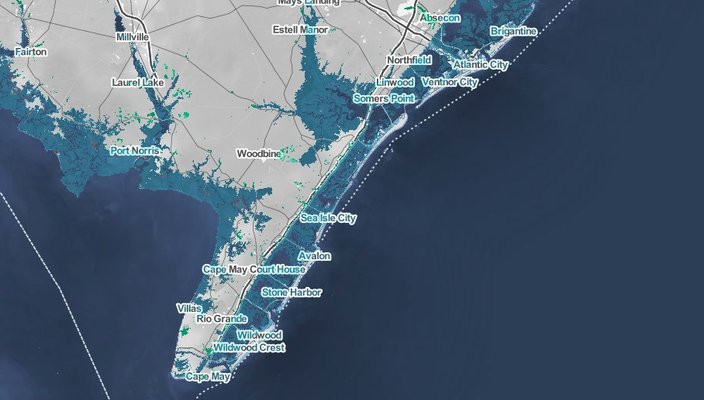 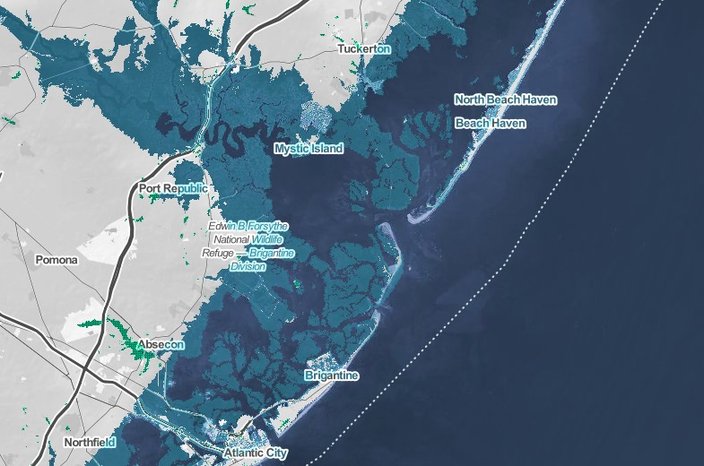 The map illustrates the most extreme flooding levels possible by 2050 in Atlantic City, Absecon, Beach Haven, and elsewhere in New Jersey. 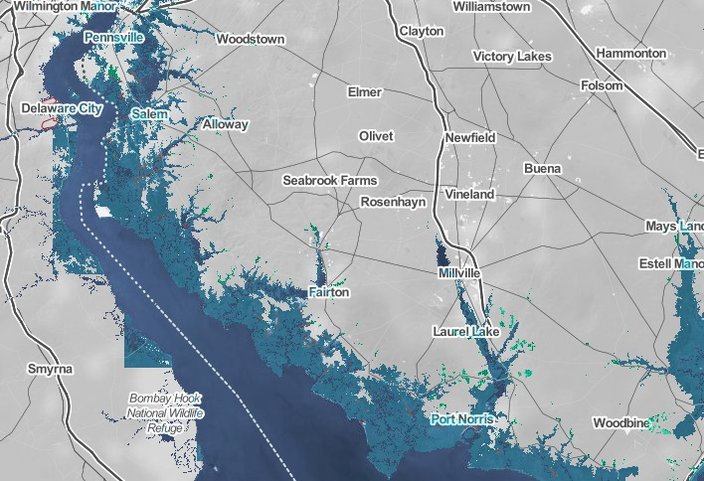 Flooding risk zones by 2050 are also prevalent in parts of Delaware.

The map below can be searched to find the 2050 flood risk data for anywhere in the United States. Options can be toggled to display projections based on different levels of carbon emissions. Those menus can also be collapsed to get a better view of the map, which is especially helpful to mobile users.