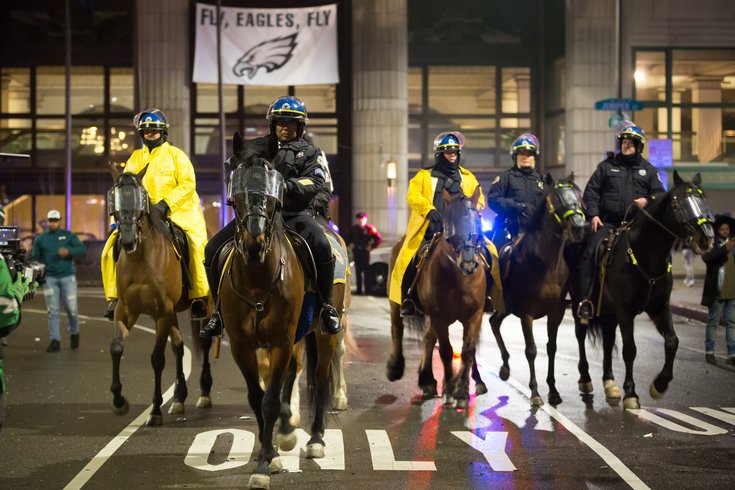 Mounted officers of the Philadelphia Police Department ride horses toward the crowd on South Broad Street during celebrations following the Philadelphia Eagles' win in Super Bowl LII on Sunday night.

Tens of thousands of fans rushed into the city's streets, reveling in the victory until the wee hours of Monday morning. The celebrations were mostly peaceful.

City officials reported only three arrests related to the celebrations, according to 6ABC.com.

Still, Mayor Jim Kenney described there were a few "idiots" among the crowds during a Monday morning interview with Angelo Caltaldi on SportsRadio 94WIP. Kenney chastised the fans who misbehavied after the Eagles' thrilling, 41-33 win over the New England Patriots.

"I've never understood why people need attention and to make a fool of themselves," Kenney said.

Throughout Center City, people climbed lamp posts and sanitation trucks. A car was flipped in front of the Bellevue at Broad and Walnut streets. Several fans jumped into the crowd from atop an awning outside of the Ritz-Carlton Hotel before it collapsed under the weight of the people standing on it.

Early Monday morning, someone through a rock through a window at the A.C. Moore store at Broad and Chestnut streets. And near 13th and Juniper streets, fans tore down several light fixtures.