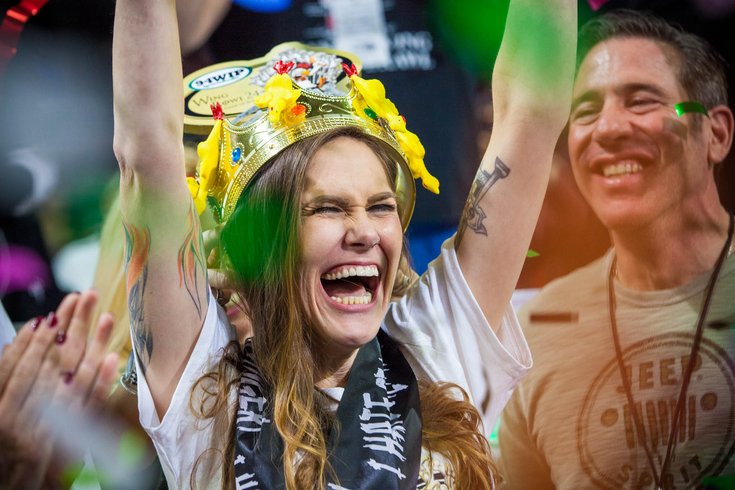 Amid all the pageantry and gluttony at SportsRadio 94 WIP’s Wing Bowl 24 Friday morning, it was sometimes easy to forget that the reason 20,000 people packed the Wells Fargo Center before dawn was a big-stakes eating competition.

It was a two-person race for the second year in a row — again between reigning champ Patrick Bertoletti and Wing Bowl 22 winner Molly Schuyler. Unlike last year, however, Bertoletti was unable to overcome the final-round deficit he faced and for the second time in three years, Schuyler, the diminutive mother from California, not only hung with the boys, but put them all to shame. The final score: 429-408.

“I won a Harley!” Schuyler shouted on stage after beating Bertoletti. “And the $10,000 isn’t that bad either.”

After the first round of eating — a round in which four contestants were disqualified, three for vomiting — Schuyler held a slim edge over Bertoletti, 193-191. Perhaps the most surprising thing was just how close the next few eaters were to the two considered to be the heavy favorites. Tiger Wings & Things was just 12 wings behind Bertoletti for third place through the first 14 minutes.

But the two separated themselves in the second round as the rest of the field began to struggle. First, it was Qwazy who became the fourth contestant to vomit, setting a new Wing Bowl record. Then, a few minutes later, Tiger Wings & Things also fell victim to the “you heave, you leave” rule. In all, seven eaters were eliminated for vomiting, more than doubling the dubious record.

Meanwhile, the two leaders were on cruise control. Here were the standings following the second round:

The final round, a two-minute blur of non-stop eating, didn’t give Bertoletti enough time to catch Schuyler, who won by 21 wings.

“She just got out to a big lead and I couldn’t catch up,” Bertoletti said. “She whooped me. It doesn’t feel good [to lose], but I still have the record. I’ll come back next year and try to beat that.”

As for the local competition, the premature ejections of Tiger Wings & Things, Qwazy and others, opened the window for Notorious, Bob Shoudt of Royersford, who ate 306 wings to win the car given to the top eater from the Philly area. And it was the Blonde Mamba, Matt Gyerman, of Temple who won the $5,000 college competition.

If you're at all familiar with the city's annual fest of gluttony, you're well aware that the wings are just part of the show.

Five-time NBA champ Dennis Rodman was in the house, and found himself in the rare scenario where his environment almost as out-there as the former star. He entered to mixed reviews from the fans, and hung out on stage before heading off the post-Wing Bowl party at Sugar House Casino.

"For some reason, most of you guys hate me," Rodman said to the crowd. "It's all good though."

But the boos weren't exclusive to the former Bulls forward. Even some of the girls being judged for Wingette of the Year -- which came with a $5,000 prize -- were booed when their names were called out.

Not Penelope Ford, however. She stole the show with a flip that ended in a split, causing the near sell-out crowd to burst out cheer.

Penelope appeared to be a crowd favorite among the top 10 Wingettes for certain reasons. #WingBowl pic.twitter.com/UtZEHvZWx5

She also had a Rocky-themed outfit, which certainly didn't hurt when it came to endearing herself to the fans.

Penelope Ford just told me she thinks her Rocky theme led to Wingette of the Year glory at #WingBowl. pic.twitter.com/OhZ5rxIZpv

Another recent trend at Wing Bowl has been an additional eating stunt -- for example, when Kobayashi set the world record for fastest cheesesteak ever eaten. This year, it was one of the current contestants, L.A. Beast, who stepped up. And while it was far more impressive than eating a cheesesteak, it also likely led to the YouTube stars elimination for vomiting.

He at a cactus. Raw. Whole. Needles and all. It was painful to watch, so I can only imagine what it felt like.

Before being booted for vomiting, @KevLAbeast ate a damn cactus and it looked as painful as you'd imagine. #WingBowl pic.twitter.com/uKXs042TK5

At least he had a good excuse for puking.

Also making an appearance was Bill "El Wingador" Simmonds, who still holds the record with five Wing Bowl titles. He missed the last two years while in prison on cocaine charges. Host Angelo Cataldi welcomed him back with open arms -- as a guest, not an eater -- but there was no mention of why he couldn't make it the last couple of years.