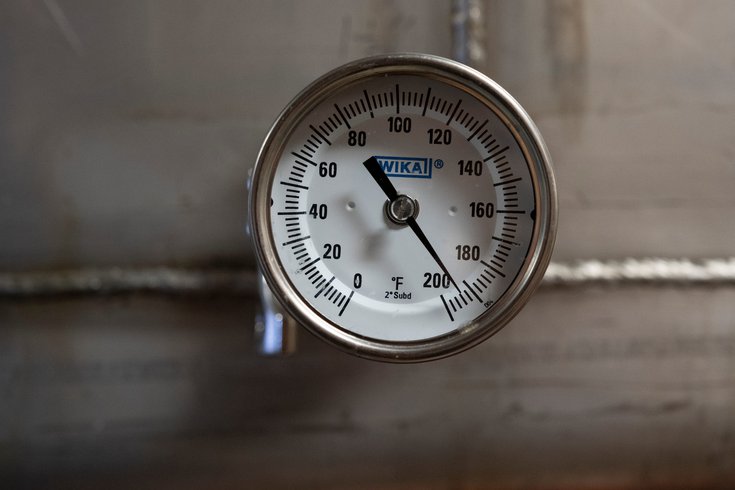 A Pennsylvania couple is facing charges for allegedly producing and selling moonshine. State police say they had been bootlegging alcohol for 30 years. The file photo above show a thermometer in legal distillery in Kentucky.

A husband and wife in Central Pennsylvania are facing misdemeanor charges after decades of allegedly running an underground moonshine business that produced and sold of the notoriously high-proof liquor, which is illegal to make and sell without a license, officials said.

Glenn and Barbara McCleester, 79 and 65, respectively, were charged last month with bootlegging-related offense after a nearly year-long investigation that began with an anonymous tip. The Port Matilda couple allegedly had been distilling moonshine for nearly 30 years before the Pennsylvania State Police Bureau of Liquor Control Enforcement intervened with a series of stings.

Sometimes called firewater, hooch or white lightning, moonshine generally refers to un-aged whiskeys that are clear in color and use a corn and sugar base, although moonshine can be made using any fermentable ingredient. Some bootleggers earn reputations for producing particularly potent moonshine with alcohol contents reaching 85%, or 190 proof.

In a more historical sense, the term moonshine describes how the practice of bootlegging homemade liquor often took place at night, under cover of darkness, to avoid government detection. Farmer-distillers in Western Pennsylvania were among the first in the country to produce moonshine, which became the spark for the Whiskey Rebellion after the federal government imposed a tax on whiskey products in 1791. The spirit has become more commonly associated with the South in modern times.

Federal law prohibits distilling of alcohol at home, even for personal use. Pennsylvania also has among the strictest liquor laws and regulations in the United States. It's against the law to own a still without a license, unless it's for historical or decorative purposes.

In April 2021, an undercover trooper from the Bureau of Liquor Control Enforcement visited the McCleesters after receiving an anonymous complaint online that the couple allegedly are bootleggers, police documents obtained by WJAC in Johnstown states.

From then until last month, the state trooper allegedly purchased four jugs of moonshine from the couple for $60 a piece.

During one of the visits, Barbara McCleester allegedly showed the trooper the purity of the moonshine by lighting it on fire to demonstrate that its flame was blue, not orange, police said. McCleester told the trooper that orange flames indicate impurities in the product, the police report states. The flame test is intended to ensure the safety of the moonshine, but the method is considered unreliable folklore for screening out all potential toxins.

Also when the officer met the couple, they claimed their moonshine recipe had been passed down to them and had come from reputed moonshiner and former NASCAR driver Junior Johnson. The North Carolina native's father was famed among a generation of moonshine producers who bootlegged the spirit during Prohibition in the early 1920's. Johnson's father's home was raided in 1935 and federal agents seized hundreds of gallons of illegal moonshine.

Johnson continued his family's moonshine tradition after his driving career ended, resulting in his arrest and brief imprisonment in the late 1950's for having an illegal still.

Moonshine has become increasingly popular again among craft distilleries that have capitalized on the intrigue surrounding the powerful spirit. Buffalo Trace Distillery in Kentucky, Ole Smoky in Tennessee and Montana's Trail House in New York all have popular moonshine products.

On Jan. 26, state police executed a search warrant on a cabin in Taylor Township, where the couple allegedly distilled their alcohol, and seized several tools connected to the operation, police said.

The McCleevers are each charged with misdemeanor counts of unlawful sales of liquor and manufacturing and selling liquor without a license. They have preliminary arraignments scheduled for Feb. 15.

NOTE: Changes were made to the headline and other portions of this article after it was originally published.