More than $200,000 lent to small businesses via crowdsourcing

The Kiva Zip Philadelphia program was launched locally in December 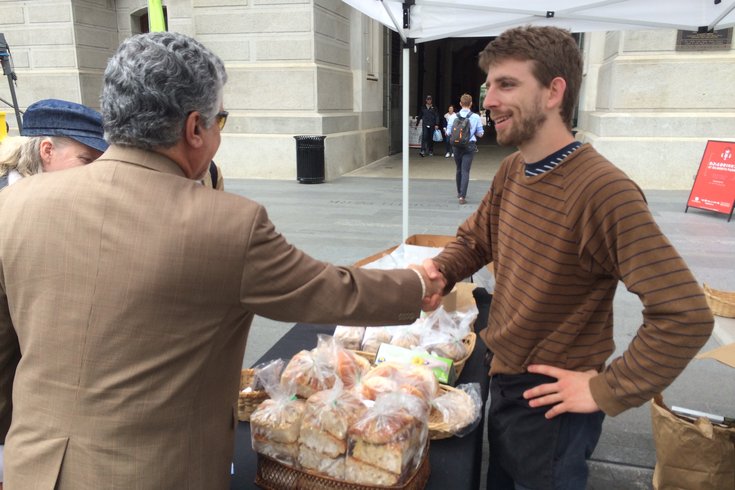 Pete Merzbacher, owner of Philly Bread, talks with a customer Thursday during a celebration of Kiva Zip, a crowd-sourced micro loan program.

Local small businesses have received more than $200,000 in loans in the first six months of an online microloan initiative called Kiva Zip, the city’s deputy mayor said Thursday at an event in Dilworth Park.

Kiva Zip allows small businesses to take out crowd-sourced loans in small amounts at no interest. Lenders can pool small amounts of money until the total loan value needed by the business is met. Some of the money lent locally is doubled by sponsors.

“[Recipients] are often small businesses that haven’t established credit ratings so they can’t necessarily talk to a bank or a financial institution,” said Alan Greenberger, Philadelphia deputy mayor for economic development. “Kiva Zip is a great way to do this.”

Before a small business can get a loan, it has to prove it can raise some capital from friends and family to show it is worthy of credit. Lenders, however, don’t receive a return on their investment and can lose their money if a borrower defaults, according to Kiva’s website.

Greenberger spoke in front of a small group of business owners who had received Kiva Zip loans. A pop-up shop on the plaza gave them an opportunity to show off their products and services – from bread to all natural peanut butter to a photo booth.

A Philadelphia partnership with the nonprofit Kiva Zip was set up in December. So far, 53 loans worth a total of $222,000 and supported by 3,800 lenders have been granted, according to the city.

The organization seeks to involve more residents in the economic development of their city by lending to local, small businesses they believe in and help contribute to their neighborhoods. Lenders can choose to loan as little as $5 to a business of their choosing. Once the loan has been fully funded, the business owner will receive the funds, and start paying back lenders the next month. The funds will then go back into the lenders' account where they can choose to either loan money to other small businesses or move the funds back into their bank account.

One of the recipients of a Kiva Zip loan is Pete Merzbacher, who owns Philly Bread, which is located on 5th Street in Olney. After receiving and paying back a $5,000 loan, he is looking to borrow another $10,000. He said the money would go toward buying a piece of equipment that would help automate the production of his Philly muffins, a signature product.

The baker said the device could save him hours of work each day.

“This is a good option for me,” Merzbacher said. He said that his business wasn’t big enough to have a lengthy credit history and qualify for a bank loan. “When I started, it was really just me and now there are eight other people.”

“These loans help create jobs, they help fill the city with delicious bread and the more we put into Kiva, the more we will see businesses in Philly flourish,” he said.