The most interesting man in the world? Matt Jones' travels bring him to Chester 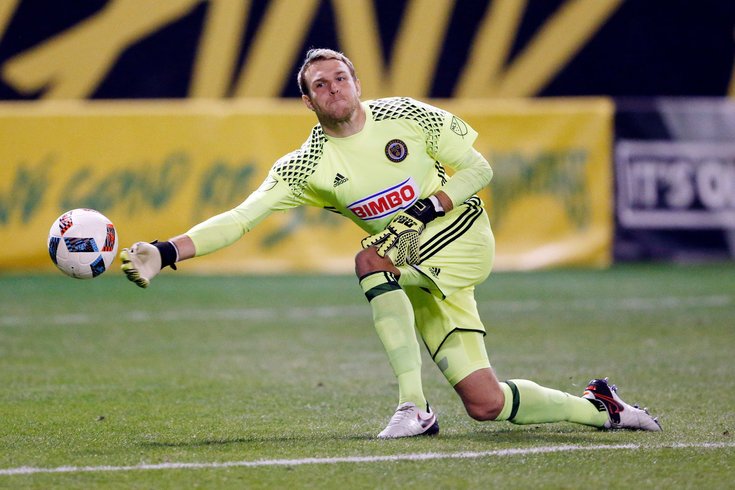 Five Union players walk into a bar and proceed to have a conversation in fluent Portuguese.

Four were born in Brazil.

The other guy is from England. He's Philadelphia's new goalkeeper, Matt Jones.

The story is theoretical, but the premise is very real. Jones grew up in the United Kingdom, then came to the United States, but learned the language after six years of professional soccer in Portugal.

"I can keep it in my back pocket, and if people start talking bad about me, I can always pull it out."

No one expects a twenty-something white guy to speak Portuguese, and Jones laughs when talking about his second language. He notes the challenge of the Brazilian accent, but feels comfortable communicating with Fabinho, Anderson, and Ilsinho. Leo Fernandes speaks English and Portuguese, so no issues there.

"The opportunity came around to come to the Union and it was something that we felt suited me and I was excited about the opportunity to play here."

But all joking aside, he's got a great story to tell.

The 29-year-old stopper followed a career path that took him from the youth ranks of Port Vale and West Brom to Sacred Heart University in Fairfield, Mass. He made his professional debut with the third division Western Mass Pioneers, who play their games at the 3,000-capacity Lusitano Stadium in the Springfield suburbs. Jones later swapped New England for Portugal's 2nd division, landing on the Azores island chain with C.D. Santa Clara.

Jones stayed on the archipelago for three years, then moved to C.F. União, another island-based club from the autonomous region of Madeira off the coast of Africa. Two years at that club prepped him for a move to C.F. Belenenses on the Portuguese mainland.

"It’s a little bit of an unusual move, but my coach in college was Portuguese, so he had a connection at Belenenses, one of the clubs over there," said Jones of his travels. "I went over there, trained a few days and I signed my first contract at Santa Clara. I had a great time over there. I was there for six and a half years. Obviously at the moment, I’m on loan so I’m still contracted to my club, but I felt that I developed as a player and as a person. It forced me to step outside of my comfort zone, learn a new language, learn a new culture, and it was great. I played against some of the best players in Europe, in some of the biggest stadiums, and it was a fantastic experience overall."

Jones describes the Portuguese game as "very technical" and different from Major League Soccer. He faced off with the likes of Jackson Martinez, Nico Gaitan, and Islam Slimani. He played on the hallowed grounds of the Estadio do Dragao and Estadio da Luz. He earned more than 80 starts for Belenenses and could have stayed in Europe to continue his career.

But returning to America was always in the cards, and it was something that he and his better half both agreed to.

Jones' wife is six months pregnant with the couple's first child. She was a center back for the Sacred Heart women's team, and the pair met during Matt's freshman year at the school. She left Connecticut to join him in Portugal and they married two summers ago.

For Megan, a nurse, and Matt, a professional goalkeeper, it made the most sense to return to the states.

"It was always something that one day we were looking to do," Jones said. "The opportunity came around to come to the Union and it was something that we felt suited me and I was excited about the opportunity to play here. For me, it was a simple decision and something we were able to get done fairly quickly. My agent sent out a few feelers to see if there would be any interest. Philadelphia came back saying that they were interested, so from there we didn't really look at too many other places, because this was a place where I felt I'd be comfortable. It's a place where I was excited to play."

Jones originally had a sniff at MLS in 2009, but ran into complications due to his status as a foreign national. He kept tabs on the league and watched games on the 'EuroSport' television network.

"I trained with the Red Bulls for a few weeks, but unfortunately a situation arose where they were waiting on international spots and, at that time, I didn't have my green card," Jones said. "They decided to go with a striker instead of a goalkeeper, which is kind of the norm here in America. A lot of clubs don't like to use their international spots on goalkeepers. But straight away, after that, I got an offer to go to Portugal and I basically took that next step, which I was happy with."

There are certainly question marks about his role in Philadelphia. Andre Blake was named the starting goalkeeper this offseason and looks to finally clamp down on the job after two years of extreme turmoil at the position.

Jones will get on the field when Blake is absent on international duty, but is that enough for a goalkeeper who is arguably in his prime? Jones says he didn't come to Philadelphia to sit on the bench.

"For me, I don’t really think about it too much right now because I know how quickly things change in football," said Jones of his role. "It could be that Andre plays this week, but it doesn’t really matter because everything changes so quickly.

"My time playing in Portugal, playing in England or in America or wherever it’s been, it doesn’t matter what position you are, there’s no point in really making a plan because football is so liquid. Whether it’s an injury, whether it’s here in MLS a trade, anything can happen, bad performances. What’s important for the players is to constantly push for that starting spot, and that’s what I want to do.

"I’d say I’m here to play. I’m not here to sit on the bench. I don’t want to sit on the bench, and I think that’s natural for any player. I’m not really thinking about that right now. All I want to do is make the coach’s life as difficult as possible when it comes to picking that starting eleven, my name’s in his head. If it’s not me that’s going to get that start, then there’s going to be a lot of pressure to decide. It’s going to have to be a difficult decision. That’s my mindset right now, just to work hard in training and keep my form up and make the coach make that decision."