Bail and charges announced for mother who abandoned quadriplegic son

Bail has been set at $2.5 million for Nyia Parler, who faces attempted murder and related charges. 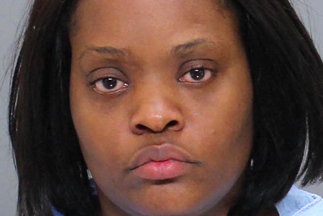 41-year-old Nyia Parler is accused of abandoning her 21-year-old quadriplegic son in the woods of Cobbs Creek for several days in April.

Read More
A Philadelphia mother accused of abandoning her 21-year-old quadriplegic son for more than four days in early April has returned from Maryland and is now behind bars awaiting justice.
According to NBC 10, Nyia Parler, who had been in Maryland since April 6, returned to police headquarters in Philadelphia on Thursday and was arraigned on attempted murder and related charges Friday morning.
RELATED STORY: Mom in Maryland, accused of abandoning quadriplegic son in woods
Parler's 21-year-old son, who was discovered in the woods of Cobbs Creek Park on April 10, has cerebral palsy and is confined to a wheelchair. Lacking verbal communication skills, he was left with no means to alert passersby of his whereabouts since at least April 6.
Authorities believe that Parler, 41, laid her son on the ground in the woods, about 100 feet off the roadway, with nothing more than a blanket and a Bible. His wheelchair was left about 10 feet away from him, according to police.

"As far as we're concerned she's criminally liable for these actions that she did," said Philadelphia Police southwest Detectives Lt. John Walker. "And the courts will have the process in place to deal with it."

The young man survived several days and nights despite temperatures dipping into the 30s at night. He was treated at Children's Hospital of Philadelphia and is currently staying with family members.
Parler, who went to Maryland to stay with a boyfriend, had been hospitalized there for a period after police issued a warrant for her arrest. Upon her release from the hospital, she was taken into custody by Maryland authorities and waived her extradition the following day. On Thursday, she was picked up by Philadelphia's fugitive squad and did not resist returning to Philadelphia.
Police said Parler's boyfriend and family were both helpful in the investigation and that a mental health defense likely will not be able to overcome the charges Parler faces, which include attempted murder, aggravated assault, simple assault, recklessly endangering another person and related charges.
Parker's bail has been set at $2.5 million and a preliminary trial hearing date will be set early next week. According to police, Parler may never see her son again.