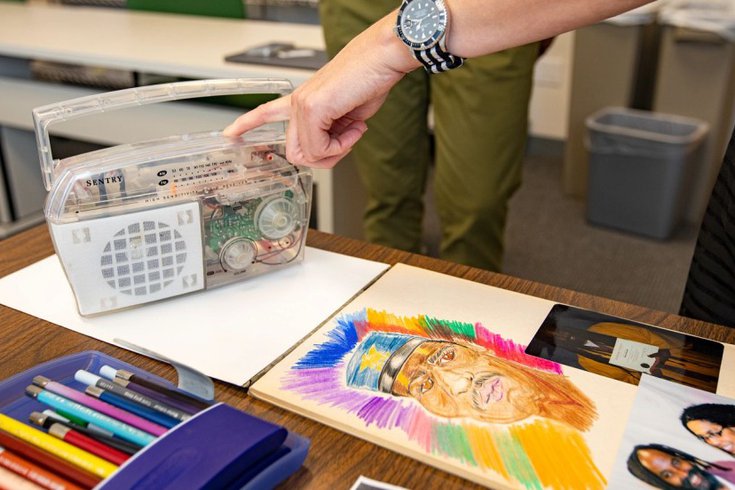 A collection of letters and papers from Mumia Abu-Jamal are the focus of research from Brown University's John Hay Library. The project aims to present first-person accounts of mass incarceration in the United States.

Brown University has acquired nearly 40 years worth of letters and personal papers belonging to political activist Mumia Abu-Jamal as part of a research project examining first-person accounts of incarceration.

Voices of Incarceration will utilize the correspondence to delve into the impacts of America's carceral system from the perspective of those that have spent time in prisons and jails. Abu-Jamal's story has stirred debate about the ethics of the death penalty and racial injustice for over four decades, a spokesperson from Brown said.

Abu-Jamal was convicted of killing 25-year-old Philadelphia police officer Daniel Faulkner on Dec. 9, 1981. Abu-Jamal's brother, William Cook, was stopped by police – including Faulkner. At the time, Abu-Jamal was working as a part-time taxi driver in the city.

Witnesses testified that Cook assaulted Faulkner and when the officer attempted to control him, Abu-Jamal got out of his taxi and shot Faulkner in the back. Faulkner returned fire and shot Abu-Jamal, who was later transported to a hospital for treatment before being transferred to the police department.

The activist was convicted of murder and was sentenced to death row in 1982. He spent 30 years there before the Philadelphia District Attorney's Office appealed the decision in 2011, pulling Abu-Jamal and his story back into the national spotlight.

He is now serving life in prison, 23 years of which were spent in solitary confinement. The case remains highly contested, even after more than 30 years of appeals.

While conflicting accounts and evidence have convinced Abu-Jamal's supporters of his innocence, those who support his life sentence – which includes widow Maureen Faulkner and the Fraternal Order of Police – have said that the criminal justice system is "broken" for allowing Abu-Jamal, now 66, to make continuous appeals.

The expansive personal archive documents Abu-Jamal's life and experience while incarcerated, spanning from 1981 through 2020.

It features information about his trial, prison and death row experience, as well as his personal thoughts on civil rights and freedom. The documents include details of the public's reaction to his case and his experiences serving time in a maximum-security prison.

There is also a thick pair of glasses Abu-Jamal frequently wore while working as a journalist before his conviction. The archive also includes personal journals, legal arguments, poems, artwork, and part of a visitors' list Abu-Jamal still has to keep in order to see people from outside of prison.

In addition to the letters, Brown's John Hay Library has also obtained personal papers from Johanna Fernández – a Brown graduate and historian who has advocated for Abu-Jamal's release. More than 60 boxes of letters, manuscripts, pamphlets and other materials will be available for researchers as early as 2023.

The collection is meant to provide additional context to fill the gaps in America's understanding of mass incarceration. Since the 1970s, the U.S. prison population has grown by more than 500% to 2 million people, more than any other nation, according to The Sentencing Project.

Amanda E. Strauss, director of the John Hay Library, said that nearly two thirds of prisoners are Black or Latino. While there is an expansive record and archive of mass incarceration in the United States, the bulk of the information that exists comes from police records. Mary Murphy, the archivist overseeing the Abu-Jamal collection, told The New York Times that her team had located only 25 archival holdings in American libraries focused on first-person accounts of incarceration.

"Prisons are designed to keep the incarcerated in and to keep others out," said Kenvi Phillips, director of library diversity, equity, and inclusion at Brown. "As a result, people who are incarcerated are largely absent from national conversations — with the exception of Mumia Abu-Jamal, who has spoken on behalf of this often invisible demographic."

Abu-Jamal has maintained his innocence throughout his 41 year imprisonment, publishing books and commentary on political and social issues from behind bars.

He also has garnered widespread support from activists, including former NFL quarterback Colin Kaepernick, who joined the "Bring Mumia Home" campaign in 2020.

Abu-Jamal co-founded the Philadelphia chapter of the Black Panther Party, where he served as a member from 1968 until 1971.

As a journalist, Abu-Jamal was a frequent critic of the Philadelphia police department. He also accused Mayor Frank Rizzo of racial bias for his administration's handling of MOVE, a communal Black liberation group from West Philadelphia whose headquarters would eventually be bombed by city police in 1985.

Fernández met Abu-Jamal in 2005 after visiting him in prison. The historian wrote and produced a documentary film about the case, titled "Justice on Trial: The Case of Mumia Abu-Jamal." She also co-edited "Writing on the Wall: Selected Prison Writings of Mumia Abu-Jamal" with the activist for the journal Socialism and Democracy.

The Abu-Jamal archive had been stored with Fernandez for more than two years before being acquired by the university through a trust. Fernandez's own personal papers were later secured directly from the historian.