Who qualifies for the Biden administration's student debt relief plan? 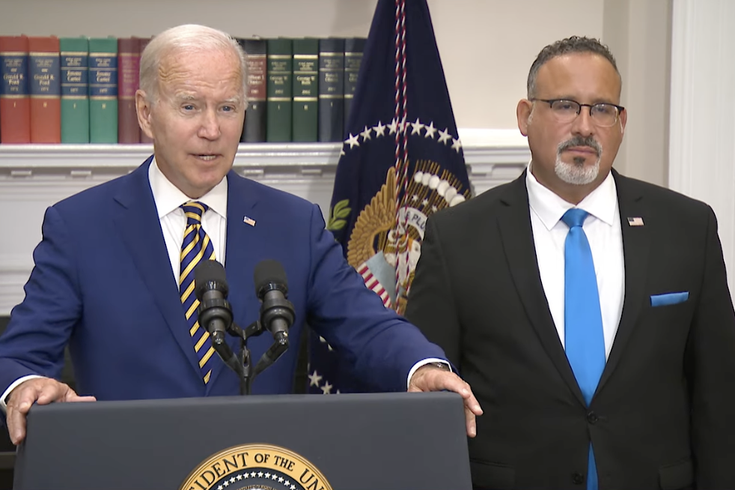 President Joe Biden and U.S. Secretary of Education Miguel Cardona announced a federal student loan debt forgiveness program that will offer relief of up to $10,000 or $20,000 to an estimated 43 million Americans.

President Joe Biden unveiled a sweeping plan on Wednesday to forgive federal student debt for millions of Americans, providing relief of up to $20,000 for some borrowers and up to $10,000 for others who qualify for the program. The president also extended the nation's pause on federal student loan payments until Dec. 31.

Biden tweeted a broad overview of the plan on Wednesday morning and the White House released a fact sheet detailing the anticipated impact of the plan.

In keeping with my campaign promise, my Administration is announcing a plan to give working and middle class families breathing room as they prepare to resume federal student loan payments in January 2023.

The student debt forgiveness plan follows years of debate about how to provide relief for those who bear the brunt of the escalating cost of college tuition, which has nearly tripled since 1980 for both four-year public and four-year private schools — even after accounting for inflation. The cumulative federal student loan debt has surpassed $1.7 trillion for more than 45 million borrowers, and the typical undergraduate student with loans now graduates with $25,000-$30,000 in debt.

These costs have hindered many borrowers from buying homes, starting businesses and even covering basic needs for their families.

"Today, we’re delivering targeted relief that will help ensure borrowers are not placed in a worse position financially because of the pandemic, and restore trust in a system that should be creating opportunity, not a debt trap," U.S. Secretary of Education Miguel Cardona said in a statement.

Who will qualify for student debt forgiveness?

The White House projects that up to 43 million Americans will benefit from the new relief measures, including the full cancelation of remaining debt balances for roughly 20 million borrowers.

To qualify for debt relief, borrowers must have an individual income of less than $125,000 or less than $250,000 for married couples.

For relief of up to $20,000, borrowers must have received a Pell Grant, which is designed to help low-income students pay for higher education. Pell grants make up more than 60% of student loan borrowers, so the White House expects as many as 27 million will be eligible to have up to $20,000 in debt canceled.

Relief of up to $10,000 in federal student loans will be available to all other borrowers who meet the income thresholds above.

The Department of Education estimated Wednesday that nearly 90% of relief dollars will go to borrowers who are no longer in college and earn less than $75,000.

How will borrowers get their debt relieved?

In order to get their debt canceled, borrowers will need to submit applications verifying their incomes. The application, which will be set up by the Department of Education, will become available no later than Dec. 31 to coincide with the end of the pause on student loans.

As many as eight million borrowers may be eligible to receive relief automatically since their relevant income information is already held by the Department of Education.

The department is expected to provide further details about how borrowers can claim this relief in the weeks ahead.

Will the debt relief be taxed?

The student debt relief measures will not be treated as taxable income for federal income tax purposes, thanks to a provision that was added to last year's American Rescue Plan. The provision removes tax consequences on student debt that's forgiven until 2026.

It is possible that a limited number of states may not conform with this provision.

“Forgiveness comes at a cost,” Jared Walczak, vice president of state projects at the Tax Foundation, told Bloomberg. “Ultimately, that may be a tax cost. But in the short term, people should just recognize that if their debt is forgiven, that may be a taxable event in their state.”

Higher education expert Mark Kantrowitz told CNBC that the Biden administration estimates the entire relief plan will cost the government somewhere in the range of $365 billion.

Will the White House plan reform student loans for current and future borrowers?

As part of a broader strategy, the Biden administration's plan aims to reform student loan repayment by lowering monthly payments.

The Department of Education intends to streamline the government's existing income-driven repayment plans, which cap monthly payments based on a percentage of a borrower's discretionary income. These plans also often cancel a borrower's remaining debt after consistent payments are made for a period of 20 years.

A series of proposed White House measures would make such plans available to millions more Americans.

For undergraduate loans, the proposal includes cutting in half the amount that borrowers have to pay each month from 10% to 5% of discretionary income.

Another rule change would forgive loan balances on income-driven repayment plans after 10 years, instead of 20, for borrowers with original loan balances of $12,000 or less.

An additional measure would aim to increase the threshold for what's considered non-discretionary income, thereby protecting more borrowers from repayment if they earn below 225% of the federal poverty level.

The plan also seeks to cover borrowers' unpaid monthly interest, ensuring that no borrower's loan balance will grow as long as monthly payments are made.

In 2019, prior to the student loan pauses undertaken during the pandemic, only about half of borrowers were in repayment and roughly a quarter were in delinquency or default, Kantrowitz told CNBC. Most other borrowers had applied for temporary relief such as deferments or forbearances, leading some observers to compare the situation to the 2008 mortgage crisis.

A Department of Education analysis of a recent cohort of undergraduates also found that nearly one-third of borrowers have debt but no degree. Often, they could not complete a degree due to the cost of attendance.

Borrowers who are in default can end up having their wages garnished or their credit scores lowered.

Critics of the White House's student loan relief plan stoked fears Wednesday that a sudden influx of disposable income could worsen inflation in the U.S. Others argued the Biden administration didn't go far enough and should have offered relief of up to $50,000 for struggling borrowers.

"I will never apologize for helping working Americans and middle class," Biden said during remarks at the White House on Wednesday, adding that the debt relief actions are "for families that need them the most."