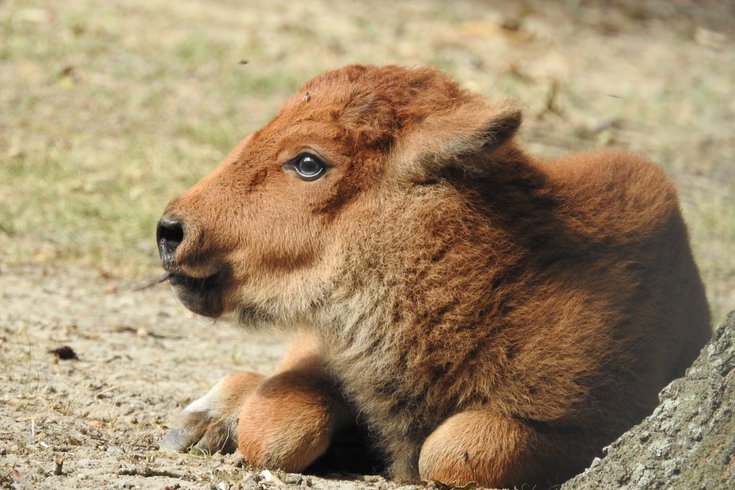 A female bison named Beverley gave birth to her first calf on Thursday, Aug. 18 at the Cape May County Zoo. The calf will join the zoo's familial American Bison herd, which can be seen in the North American Prairie habitat.

The Cape May County Zoo welcomed a very big bundle of joy last week when a female bison named Beverley gave birth to her first calf.

The calf was born on Thursday, Aug. 18 and will join the zoo's familial American Bison herd, which can be seen in the North American Prairie habitat. The bison calf does not yet have a name, but zoo officials hope to open up a naming contest to the public soon.

"Beverley's new baby was born in the bison habitat right around noon on Thursday afternoon," Dr. Alexander Ernst, associate veterinarian, said in a release. "Her calf is strong and healthy and mom is taking very good care and is protective of her."

It's believed that the calf is a female weighing an estimated 40-50 pounds, but neither has been confirmed yet because veterinarians haven't attempted to separate the baby from its mother. This is due to Beverley's protectiveness and the fact that the baby seems to be healthy and strong and not in need of any urgent medical care.

Despite this being Beverley's first calf, zoo officials are impressed with how well she's taking to motherhood.

"We are very proud of Beverley because this is her first calf, and she is taking such good care you would think she's done this before," Ernst said.

Bison calves are reddish in color and weigh between 30 to 70 pounds at birth. After about two months, the calf begins developing shoulder humps and horns, and its coloring will change to brown. Baby bison stay with their mothers for about a year after birth.

American Bison, often mistakenly referred to as buffaloes, stand between 5 and 6.5 feet tall at the shoulder and can weigh over a ton, making them the heaviest land animals in North America.

The species is a symbolic animal of the Great Plains, because they once covered the region along with much of North America. They also were important to Native American societies. In the 19th century, white settlers killed around 50 million bison for food, sport and to deprive Native Americans of an important natural asset.

Today, bison numbers have rebounded somewhat, and their status on the International Union for Conservation of Nature's Red List of Threatened Species is "Near Threatened."

"We are thrilled to announce the new addition to our zoo family," County Commissioner E. Marie Hayes, liaison to the zoo, said. "The variety of species that call our zoo home allows visitors to see up close animals they would not typically see living in the Northeast region of the United States. The Board of Commissioners is proud of the conservation efforts by the zoo veterinarians and staff, and the birth of an American Bison at our zoo serves to grow the numbers of bison in the United States."

The unnamed calf joins a host of other adorable baby animals born at the South Jersey zoo recently. In 2020, a critically-endangered Tamarin monkey was born. In the past year, two sets of capybara twins were born at the zoo. The cute little twins can be visited during Capybara Encounters, when guests pay to spend 20 minutes feeding and learning about the aquatic rodents.