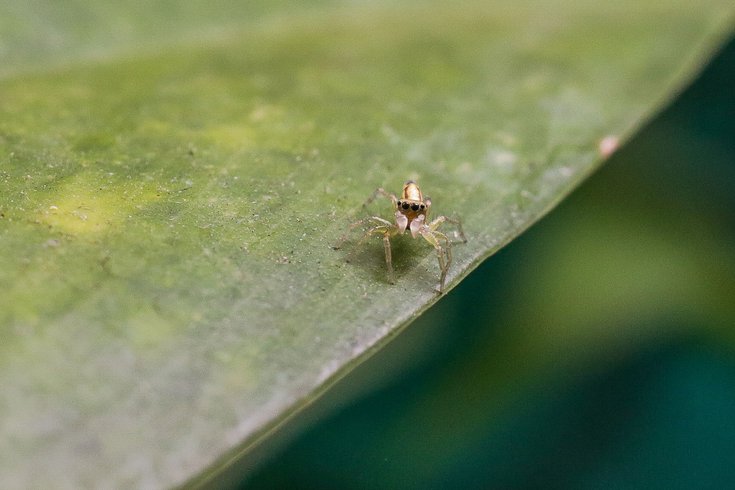 A recent study published by an ecologist in Germany found that jumping spiders exhibit an REM sleep-like state – the stage of slumber in which dreams occur. The research suggests that spiders may have similar sleeping habits to humans.

Spiders? They're just like us! Well, at least they may be when it comes to their sleeping habits.

A new study of jumping spiders found evidence that the small invertebrates may experience an REM sleep-like state. Jumping spiders, which make up 13% of all spider species, have some of the best vision among arthropods. It's comparable to animals that are much larger – including humans.

REM, or rapid eye movement, is a stage of the sleep cycle where brain activity increases and dreams become more intense. The eyes begin to move around rapidly without sending visual information to the brain and major muscles become temporarily paralyzed.

Sleep-like states are known to exist across the animal kingdom, but the presence of sleep stages remains unclear. This is because many animals do not have movable eyes the way humans do, which makes it difficult to study the primary indicator of REM – eye movement.

Daniela Rößler, an ecologist at the University of Konstanz in Germany and lead author of the study, found some indication that jumping spiders exhibit a nighttime resting behavior.

In a field near her home, Rößler discovered that some jumping spiders would suspend themselves upside down on a silk line. Their bodies remained inactive, besides some leg curling and twitching, which is characteristic of the REM stage.

"The way they twitched just made me think of dogs and cats dreaming," Rößler told National Geographic.

While jumping spiders may not possess movable eyes, they do have retinal tubes that can redirect gaze. These movements can be observed in newly-hatched spiderlings because their exoskeleton is temporarily see-through.

Rößler set up a small spider nursery in her lab, where she filmed baby jumping spiders overnight with an infrared camera to study their retinal and leg movement. She found direct evidence of an REM sleep-like state similar to that of dreaming humans, something never before observed in arachnids.

Jumping spiders rapidly move their eyes and twitch during rest, suggesting they have visual dreams, never before observed in arachnids https://t.co/B7JaWXBVF0 pic.twitter.com/CDRUjCGdcu

Does this mean spiders actually dream? While it's not technically proven that the period of nighttime inactivity can be considered sleep for spiders, Rößler said there certainly seems to be some evidence based on her observations.

"Occasionally, there are things happening that I can only explain with the theory of them having a nightmare," Rößler said. She observed spiders peacefully hanging, legs curled in tightly, when all of the sudden " ... all the legs get extended at the same time, like aah!"

We may be anthropomorphizing here, but perhaps the spider nightmares center on coming into contact with screaming humans. It's estimated that between 3% and 15% of the population has arachnophobia, or fear of spiders.

If nothing else, maybe this new information will help endear spiders to those who intensely fear them, in the same way the fluffy, baby-voiced Lucas the Spider sets out to do.

So, next time you see a little eight-legged friend hanging upside down at night, don't panic – simply tuck it in and wish it sweet dreams.