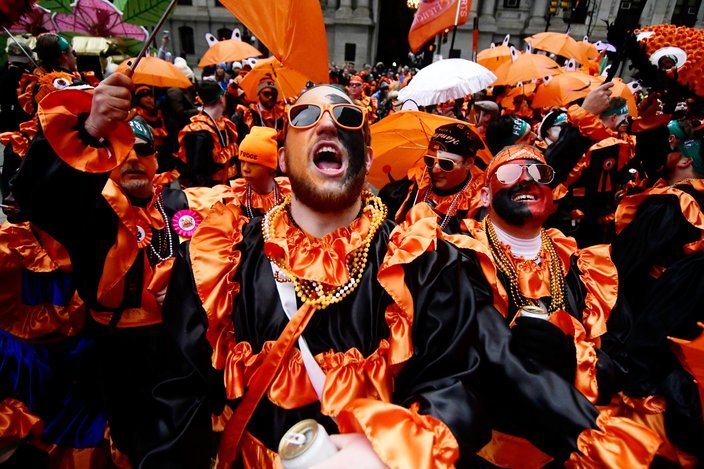 Philadelphia City Councilmembers and Mummers leadership met for about an hour on Monday at City Hall to discuss possible reforms and improvements to the annual New Year’s Day parade amid the blackface controversy.

The meeting comes as Councilmembers Cindy Bass and Mark Squilla have introduced legislation that would ban Mummers who wear blackface in the parade for five years, as well as impose a $75 fine on violators.

“I think it was a very productive meeting,” Bass said to CBS 3. “I think they understand what is at stake here, which is that members, individually, would be banned with the legislation I introduced last Thursday, or we’re working with the city law department to get even more robust legislation which would ban an entire brigade for repeated offenses.”

Bass is also calling for an end to the “One-Day Mummer” policy, where people can purchase a pass to march in the parade. The two men who wore blackface at the 2020 edition of the parade marched via this policy. The two men were part of the Froggy Carr club, and it resulted in the South Philly wench brigade being disqualified from the competition portion of the event.

Bass and Squilla also want Mummers to go through sensitivity training, according to NBC 10.

It was the first meeting between Mummers leadership and Councilmembers since legislation, which currently has eight co-sponsors, was proposed last week, according to the Philadelphia Tribune. It appears as if Mummers leadership is open to these changes.

“If it takes that, we’re for it. We’re not against sanctions,” said Mummers Comic Division President Richard Porco to the Tribune.

Porco said to WHYY earlier this week that he’s willing to work with Mayor Jim Kenney to fix the parade.

“We need them to help us come up with a solution,” Comic Division President Richard Porco said. “You can’t arrest them, it’s not an arrestable thing they are doing, it’s their way of thinking.”

“We are trying our best,” Porco continued. “We’ve improved our themes. Out of 10,000 Mummers two knuckleheads went rogue and I think they regret it.”

Last week, Mayor Kenney threatened to end the annual Mummers Parade unless significant changes were made in a letter addressed to the five presidents of the Mummers groups. Kenney also rebuked the blackface-wearing Mummers via Twitter earlier this month.

The club said that the two men who wore blackface broke from the ranks and applied the paint after the parade started once costumes had already been checked by club leaders.

Saying that their actions were not approved, Froggy Carr's leaders stated that the two men will never be allowed to march in the Mummers Parade again, and that they will make sure that the men are never permitted to be part of the tradition with other mummers groups.

Another meeting between City Councilmembers and Mummers leadership in the future appears likely, according to the Tribune. Mayor Kenney has also called for a meeting with the five Mummers presidents in the near future too.