As many as 74 students are infected with the highly-contagious disease, with 25 new cases since Friday 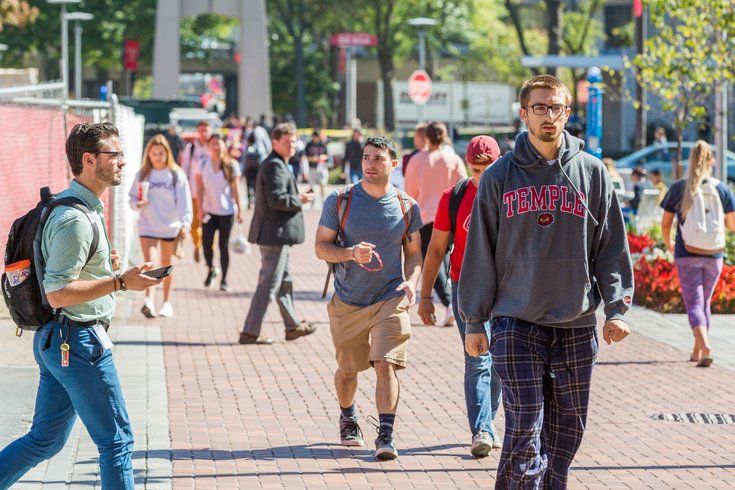 Students on the campus of Temple University.

Nearly three weeks into a mumps outbreak that has infected as many as 74 students, including 25 new cases since Friday, Temple University officials said Thursday they would offer free vaccinations next week in an effort to contain the highly contagious disease.

A confirmed case of mumps was reported Thursday at West Chester University, according to officials there who said the student had visited the Temple campus recently.

Temple has advised students to self-isolate, avoid travel and limit contact with other people if they begin to experience symptoms, which often include swollen salivary glands. That can be challenging on a college campus, with thousands of students living in close quarters in both on-campus and off-campus housing.

"That's really what we're trying to hammer home," Director of Student Health Mark Denys said. "Making sure they're not going out to parties, they're not sharing cups, they're staying away from people. That's the only way this is going to stop."

Through Wednesday, Temple had 15 confirmed mumps cases and another 59 probable cases, Denys said. None involved any known complications.

Still, Denys said the outbreak could linger for several more weeks due to the mumps' prolonged incubation period of 12 to 25 days. He based this estimated timeline on similar outbreaks that have occurred in recent years at Penn State University, the University of Iowa and the University of Illinois at Urbana-Champaign.

"I think we're still in the beginning," Denys said. "All the situations are different. It's usually a few months. Hopefully, it will start getting less, but because of that long incubation period, it does tend to come in waves."

Temple has instructed all students with the mumps to self-isolate for five days, Denys said. Those who must come in contact with others are advised to wear a mask.

Temple also is reaching out to anyone who may have come in close contact with the infected students, recommending they receive a booster shot of the measles, mumps and rubella (MMR) vaccination, Denys said. That includes roommates, significant others and people who have had prolonged contact.

Additionally, students concerned that they are living in close contact with sick students – particularly suite mates or roommates – inside the residence halls may request to be placed in open spaces, depending upon availability, Temple spokesman Christopher A. Vito said. Cleaning supplies also are available.

An online petition has called for Temple to temporarily close until the mumps outbreak has passed, noting students with autoimmune disorders are at greater risk of getting mumps. Just before 1 p.m. Thursday, the petition exceeded its original goal of 10,000 signees, and the goal was raised to 15,000 signatures.

Temple officials have not held any conversations about closing its main campus, Vito said. The first mumps case was diagnosed February 28 – just before the university began its spring break.

A town hall on campus with U.S. Sen. Bob Casey that was scheduled for Saturday has been postponed "so that the City and University personnel can focus on the mumps outbreak response," his office announced.

The university is working alongside the Philadelphia Department of Health and the U.S. Centers for Disease Control and Prevention to halt the outbreak.

"For students who can leave campus and go to a private bedroom, that's ideal," Health Department spokesman James Garrow said in an email. "For students who are living in dorms or shared apartments and cannot leave, they are encouraged to work out a system where they give their roommates as much space as possible, don't share anything that could have saliva on it, wipe down any high-touch surfaces (like doorknobs)."

If you are experiencing symptoms of the mumps, we urge you to self-isolate - this means no parties, classes and other events that bring you into contact with others. Keep your hands washed and cover your coughs and sneezes #tuready #mumps #templeuniversity #publichealth pic.twitter.com/vnCtuVd2me

Mumps is passed through saliva and respiratory secretions. Symptoms typically appear 16 to 18 days after exposure. But the disease can be transmitted up to two days before symptoms first appear and is considered contagious for up to nine days after presenting symptoms.

People in close contact with infected students are advised to contact Temple Student Health or their own doctor if they begin to feel sick, Garrow said.

In addition to a swollen jaw and cheeks, mumps symptoms include fever, muscle aches, lethargy and loss of appetite.

In response to the outbreak, Temple has updated its immunization policy to require all matriculating students to receive two doses of the MMR vaccine, two doses of the chicken pox vaccine and one dose of the tetanus, diphtheria and pertussis vaccine.

Two doses of the MMR vaccine is about 88 percent effective against mumps, Denys said. The majority of the Temple cases were in people who had been vaccinated.

The CDC currently recommends children receive the first dose of the MMR vaccine at 12 to 15 months and a second dose at four to six years. A third dose is only recommended during outbreaks.

"I think we're moving to a third dose recommendation for people that enter college," Offit told WHYY. "Because especially with these outbreaks now of mumps, we need to take that disease more seriously."

There only are a few hundred cases in most years, but there have been several outbreaks since 2006, including several on college campuses.