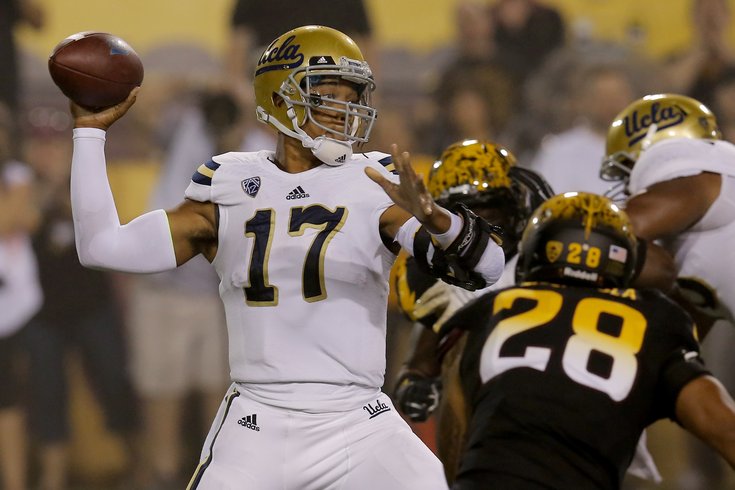 "With the fifth round pick in the draft the didn't happen, Captain Hindsight would have selected Brett Hundley, QB, UCLA."

Over the last few weeks, many of you have taken exception to my criticisms of the Eagles not drafting any offensive linemen in the last two drafts, despite having the oldest OL in the NFL. A common question I've gotten is "Well Mr. Know-It-All, who would you have drafted instead of the guys they got?"

To be clear, for the most part, I think the Eagles drafted good players, but I'll answer that question today. Using the draft picks the Eagles originally had before the start of the draft, I'll select eight players who were available at those spots.

Obviously, this is an extremely flawed exercise, seeing as I know exactly how the draft fell into place, which is basically like seeing your opponents' cards in a game of poker. It's what we'll call "The Captain Hindsight Draft."

Who the Eagles took: Nelson Agholor

Where Jones went: 27th overall to the Cowboys.

Nelson Agholor will more than likely be an immediate contributor in the Eagles' offense, as some have named him as a potential Offensive Rookie of the Year candidate. I don't disagree, and I think Agholor was a good pick. However, because this draft was so loaded with talent at the wide receiver position, I probably would have preferred the size/speed freak of nature in Jones here. The Eagles did eventually draft a corner with similar size-speed attributes in the second round in Eric Rowe, but they had to give up draft picks to move up to get him.

Who the Eagles took: The Eagles gave up both of their fifth round picks to move up five spots from 52 to 47 to select Eric Rowe. They received a sixth round pick from the Dolphins in return. In chart form:

Where Fisher went: 53rd overall to the Bengals.

I was very surprised that Fisher fell all the way to pick #52, as he was a player a lot of people thought could be in play for the Eagles at pick #20. During the draft, in the moments immediately after it was announced that the Eagles had traded up from 52 to 47, the two most likely players I thought they were targeting were Rowe and Fisher. They went with Rowe, obviously, but in this scenario, they could have just stood pat and gotten sorely needed OL help without trading away their fifth round picks. Fisher could have potentially been an immediate starter as guard, with the long term likelihood that he would kick out to right tackle.

Who the Eagles took: Jordan Hicks.

Where Hicks went: 84th overall to the Eagles.

Hicks was completely off my radar heading into the draft, so to be clear, this is not who I would have taken with this pick. Fo the purpose of calling my shot, it more than likely would have been size-speed freak pass rusher Danielle Hunter, who went to the Vikings at pick #88. However... I do have an appreciation for drafting "the best player available," and Chip Kelly noted after this pick that there wasn't a player on their board that had a grade anywhere close to Hicks. So as a supporter of drafting the best players available, if they liked Hicks this much, then fine.

Who the Eagles took: Nobody. A run on offensive linemen occurred before this pick, and they traded out for a 3rd round pick from the Lions in 2016.

Where Greene went: 139th to the Jaguars.

Because this draft was so loaded with WR talent, there was going to be a receiver that inexplicably fell a couple rounds farther than he should have. In my opinion, that was Florida State wide receiver Rashad Greene, who was a third round talent that fell to the fifth. Greene actually reminds me a lot of Agholor -- Smooth route runner, very good after the catch, smallish but willing to make catches in traffic, punt returner skills, etc. The difference is that Agholor is slightly bigger, and more explosive. But from a value standpoint, I'll gladly take Greene in the fourth over Agholor in the first.

Who the Eagles took: Nobody. They traded this pick to move up to get Eric Rowe.

Where Hundley went: 145th to the Packers.

Hundley was a very polarizing player in this draft. On the one hand, he has good size, he can run, and he has a strong arm. Physically, he's everything you want in a quarterback. However, the most common knocks on him were that he had trouble reading defenses and he took a million sacks. But holy hell, I can get him in the fifth round? Yes please. With the Mariota dream having died, Hundley is a player the Eagles could have begun to groom in case things didn't work out (and even if they did) with Sam Bradford.

Who the Eagles got: Nobody. They traded this pick to move up to get Eric Rowe.

Where James went: 160th to the Steelers.

James is a big 6'7, 261 pound in-line tight end who could have been a replacement for the expensive Brent Celek in 2016.

Who the Eagles got: Randall Evans.

Where Gwachum went: 209th to the Seahawks.

To be clear, I really liked the Eagles' selection of JaCorey Shepherd in the sixth round, which occurred five spots before the Eagles took Evans at pick number 196. However, Shepherd was selected with the pick they received from the Dolphins in the Eric Rowe trade-up, so it wouldn't be fair to assume that Shepherd would have fallen another five spots to 196.

Gwachum played WR at Oregon State, but moved to DE his senior year. At 6'5, 246, with 34 1/2 arms, he has the size and athleticism that Chip Kelly loves. Gwachum is also thought of as a high character guy, via NFL.com. This is a player the Eagles would have had to develop. When you're drafting in the later rounds, you can either go after players who can contribute quickly on special teams, or you can target guys who have a lot of upside, but need a lot of work. Since the Eagles already have more than their share of quality special teamers, I'd have taken a long term chance on a size-athleticism freak.

Who the Eagles took: Brian Mihalik.

Where Collins went: Nobody had the guts to draft him.

La'el Collins' agents bluffed the NFL into not drafting him when they said that Collins would opt to re-enter the 2016 draft if he were not taken in the first three rounds.

Some teams express contempt for Collins’ bold move. Others call his agents to gauge their position. Are they bluffing? Six teams tell the agency they’re going to draft him on Saturday, the third day of the draft. “If you draft him, he’s going into next year’s draft,” McCartney tells them.

Was it a bluff?

“We can put it on the record now: We were never going back in the draft,” Smith says of waiting for the 2016 draft. “If someone had drafted him, we would’ve had a long, long discussion about it, but at the end of the day you can’t go back in the draft. He could get injured, gain weight, or 10 great tackles could come out. Too many risks.”

In other words, the Eagles could have drafted a first round talent in the seventh round, and he likely would have signed with them. That would of course have been a mildly risky move, considering they would have wasted a pick if Collins if he and his team of agents did indeed decide to sit out for a year.

IT WAS A MEASLY SEVENTH ROUND PICK!!!!!

The upside of getting a potential immediate starter at a position where the Eagles sorely needed depth far outweighed the possible downside of wasting a seventh round pick.

So there you have it:

You: "Thank you Captain Hindsight!!!"