Calling 988 is meant to be as simple as dialing 911 in an emergency. The number connects people to one of 200 crisis centers in the United States 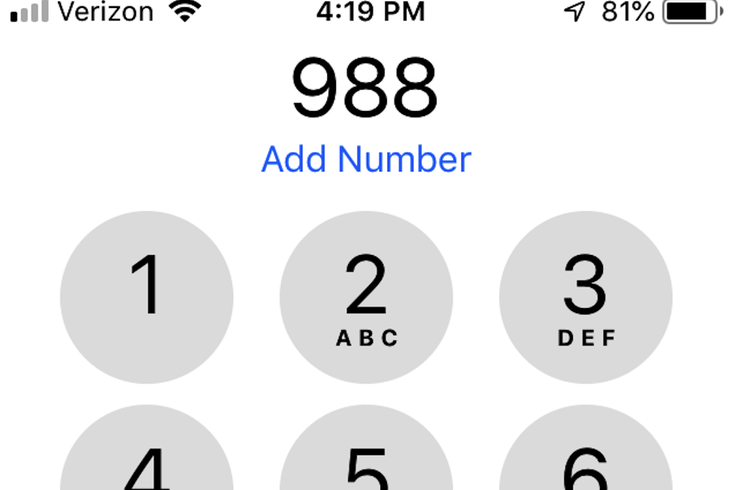 988, the new, easy-to-remember National Suicide Prevention Lifeline is set to be launched nationally on Saturday, July 16. People experiencing mental health, substance use or suicidal crisis can call or text the three-digit number to speak with a trained counselor and access additional resources.

A new national suicide hotline — 988 — is set to go live nationally on Saturday, July 16, according to the National Suicide Prevention Lifeline. The easy-to-remember number will be available 24/7 for anonymous calls and text messages to trained mental health counselors.

The old suicide prevention hotline, 1-800-273-8255, is still available even after the launch of the three-digit lifeline. However, the new number is meant to be as simple as dialing 911 in an emergency. It's intended to be more widely accessible than the original hotline.

Like the previous suicide hotline, 988 is completely anonymous and confidential. In most states, those who utilize the hotline will be connected to one of 200 local crisis centers in the United States. If those are backed up or busy due to funding or staffing shortages, callers will be connected to a national backup center.

"988 isn't just a number, it's a message," Xavier Becerra, secretary of the U.S. Department of Health and Human Services, told Politico. "It's the signal to America that we want to consolidate that service, we want to strengthen that service and we want to make it consistent. We won't have the luxury of decades like 911 had to get on the ground and running."

Local crisis centers will more easily be able to connect those calling and texting to additional resources for treatment and support. However, counselors are available 24/7 to talk about any issues related to mental health, substance use or suicidal crises. People are encouraged to call for any reason, even for relationship or familial issues.

The 988 Suicide and Crisis Lifeline website includes a searchable tool that allows users to find the closest crisis center to them. Though not every community has its own call center, a quick search will bring up the Philadelphia's Department of Behavioral Health and Disability Services as the closest mental and behavioral health center in the region.

Call services will be available in English and Spanish, with additional interpretation in more than 150 different languages. Access is available at no cost for all landline, cell phone, and voice-over internet devices in the United States.

Earlier this month, The Wall Street Journal reported that 1 in 6 calls to the current National Suicide Prevention Lifeline ended before reaching a counselor. In many cases, callers are unable to reach local crisis centers because of facility or capacity issues, and are then transferred to a national backup center.

The 988 number is meant to be the beginning of a "reimagining" of emergency crisis response in the United States. The national increase in calls can result in longer holds for those in need, so the federal government provided an additional $105 million in grant funding to 54 states and territories in advance of this month's transition to the three-digit line.

Pennsylvania's Department of Human Services received $3.1 million in American Rescue Plan funding, while New Jersey's Department of Human Services received $2.5 million to help transition to the new service. Still, states throughout the country are worried that the additional funding is not significant enough to provide care to the influx of people expected to use the new service.

Suicide is a leading cause of death in the United States, according to the Centers for Disease Control and Prevention. Suicide rates increased by 30% between 2000 and 2018, and decreased slightly in 2019 and 2020.

In 2020, 45,979 Americans died from suicide, which is about one death every 11 minutes. However, the number of people who seriously think about or contemplate suicide is much higher. That same year, an estimated 12.2 million people thought about suicide, 3.2 million planned to commit suicide, and 1.2 million Americans attempted suicide.

That year, 1,694 Pennsylvania residents and 679 New Jersey residents took their own lives, according to CDC data. It remains the second leading cause of death for Americans ages 10-14 and 25-34.

In particular, mental health experts have voiced concerns to Congress and other federal leaders about a national youth mental health crisis, which has led to more emergency department visits and suicide attempts among children and teenagers in recent years. Upticks in diagnoses of mental illnesses have followed, though these issues are felt disproportionately among marginalized groups including Black, Indigenous and other communities of color.

While experts have noted that it's difficult to predict who is more at-risk of suicidal thoughts or actions, there are some risk factors and warning signs that loved ones and mental health professionals can look out for, according to the Substance Abuse and Mental Health Services Administration.

Though the most common warning signs are frequent discussions or threats of self-harm or of killing oneself, other behavioral changes include seeking out ways to kill oneself (by trying to access firearms or available pills) or talking and writing about death.

Feelings of hopelessness, agitation or recklessness followed by a withdrawal from friends, family and society are also typical warning signs that someone may be thinking of suicide. Additional feelings of worthlessness, anxiety and seeing no purpose for being alive are reasons why some people may want to seek help or advice from a mental health professional, according to SAMHSA.

The original suicide hotline was popularized with the release of "1-800-273-8255," a song released by Maryland-born rapper Logic in 2017. The National Suicide Prevention Lifeline saw a 27% increase in calls to the hotline within the first three weeks following the release of the song. Following Logic's performance at the 2017 MTV Video Music Awards, the Lifeline saw a 50% increase in calls.