Splash pads are challenging to disinfect and can quickly become contaminated 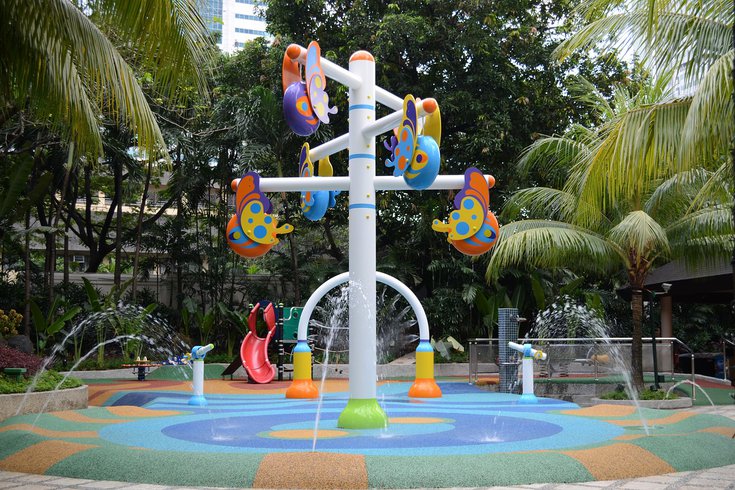 Properly disinfecting spraygrounds with germ-killing chemicals can be more difficult than swimming pools, particularly given the number of children in diapers that play in them.

Splash pads are popular spots for kids to cool off during the summer, but the risk of infection from germs can be higher than other aquatic venues, like swimming pools, because they are not as strictly regulated.

These interactive fountains, also known as spraygrounds and splash parks, are designed to spray or jet water to cool off people of all ages. Parents, in particular, take children to them partly because there is less risk of drowning. But because they do not always meet state and local definitions of an aquatic venue, they may not be regulated or required to disinfect water, according to the U.S. Centers for Disease Control and Prevention.

Properly disinfecting spraygrounds with germ-killing chemicals can be more difficult than swimming pools, particularly given the number of children in diapers that play in them.

Sitting and standing on the jets can wash feces, dirt and microorganisms into the water, which is then sprayed into air and potentially into children's mouths, the CDC says. And not all spraygrounds are built so that water is recirculated and disinfected each time it is pumped upward. The water in some of them only passes once through the pipes and then drains out into the sewer system.

There are nearly 1,900 splash pads in major U.S. cities, a jump from about 1,300 in 2017, according to the Trust for Public Land. Many playgrounds in the Philadelphia area offer them as a safer alternative to swimming pools. The city has more than 90 of them.

The Philadelphia Parks and Recreation did not respond to a request for comment on the way the city's splash pads are disinfected.

Some spraygrounds have been the epicenter for infection outbreaks. There were more than 200 outbreaks linked to pools, hot tubs and water playgrounds between 2015 and 2019, the CDC reports. Because chlorine doesn't kill germs instantly, splash pads quickly can become contaminated by a person with diarrhea.

In 2005, more than 2,300 people contracted cryptosporidiosis at a splash pad in New York. The diarrheal disease is caused by a parasite that can live more than seven days in water that has been disinfected with chlorine and bromine. In response, New York passed emergency laws to require splash pads use ultraviolet light systems to kill the parasite.

Children also can get ill from other gastrointestinal illnesses like the norovirus, which causes vomiting and diarrhea. Recreational water illnesses also can cause skin, ear, eye, respiratory and neurologic symptoms.

And though rare, some children have died after playing in contaminated spraygrounds.

Last year, a 3-year-old boy in Texas died from a brain infection caused by a "brain-eating" amoeba, Naegleria fowleri, which kills 97% of the people it infects. Texas health officials determined the water had been recirculated without being properly disinfected.

How to prevent infections

Parents can help reduce the chance of infection with a few safety precautions. The CDC advises parents to keep children out of the water if they have diarrhea and to check diapers regularly because swim diapers do not prevent fecal matter from getting into the water.

Older children should make frequent trips to the bathroom so they don't pee or poop in the water, the CDC recommends. In addition, children should shower before and after playing in the sprayground. Parents should encourage children not to swallow water and not to stand or sit on jets because they can rinse poop off their bottoms.

"Parents should take the same proper precautions as with public pools when attending spraygrounds," the Philadelphia Department of Public Health advised. "Check diapers and take bathroom breaks every hour. Parents and children should wash their hands before and after swimming or playing and after using the bathroom. As in all cases if you or your child is not feeling well, stay home to help prevent spreading germs."

The health department recommends people who are too sick to visit a sprayground beat the heat by taking a cool shower or bath, use air conditioners or fans and take other steps.