The app, created by engineers and hearing specialists at University of Washington, is much cheaper than tympanometers used by health care providers 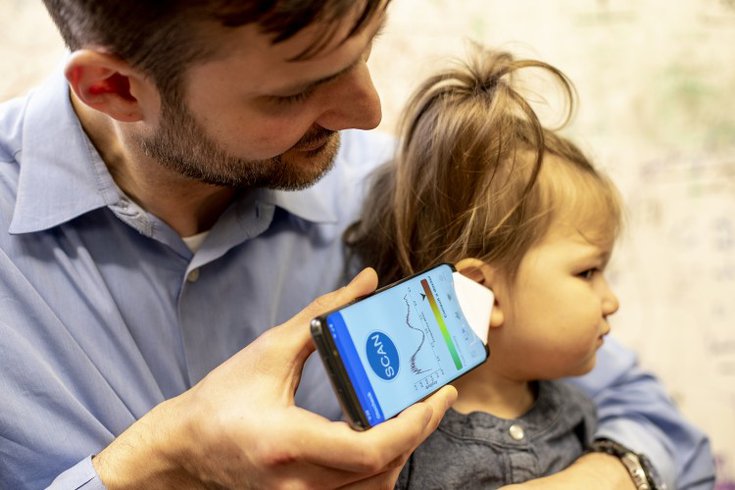 Researchers from the University of Washington have created a low-cost tympanometer system that can diagnose middle ear disorders using a smartphone app and a piece of paper.

Ear infections may soon be diagnosed with a smartphone.

Researchers from the University of Washington have created a low-cost tympanometer system that can detect fluid in the middle ear by using a smartphone app and a piece of paper.

The system was tested in 50 ears of children attending an audiology clinic, and a panel of pediatric audiologists found it performed similarly to commercial tympanometers, according to a preliminary study published last month.

The smartphone makes a series of soft, audible chirps into the ear through a small paper funnel. Depending on how the chirps reflect back into the phone, the app can determine the likelihood of fluid present within the ear. If fluid is present, the smartphone will detect it about 85% of the time, a figure on par with current methods used by specialists, according to a prior study published in 2019.

One major difference between this smartphone app and a typical tympanometer, a device used to detect ear problems, is its cost and accessibility.

According to STAT, tympanometers can cost thousands of dollars, making them too pricey for many health care providers worldwide. The smartphone app designed by the group of engineers and hearing specialists in Washington, on the other hand, is cheap enough and small enough to reach providers who need them.

Ear infections are more common in children than adults, and are usually caused by middle ear inflammation, which can occur when bacteria forms due to fluid building up behind the eardrum. Five of six kids will get an ear infection by their third birthdays, according to the National Institute on Deafness and Other Communication Disorders.

Diagnosing ear infections is important, because untreated or chronic ear infections can lead to complications such as impaired hearing, speech or developmental delays, spread of infection and tearing of the eardrum, according to the Mayo Clinic.

Along with this new diagnosis technology and the telehealth capabilities used during the COVID-19 pandemic and beyond, smartphones are being utilized in many ways in the medical field. They're also being used to enhance the power of the stethoscope, with doctors using smartphones to amplify heartbeat or breathing sounds so they can discuss them with patients in real time.