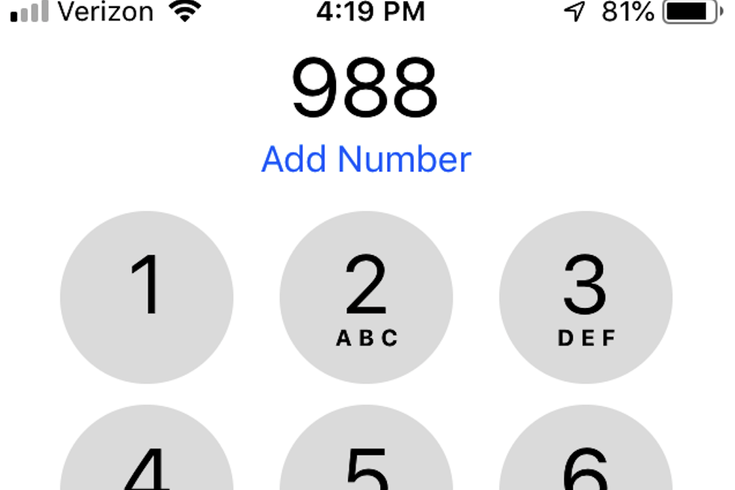 The Federal Communications Commission has approved 988 as the new phone number for the national suicide prevention hotline.

In an effort to make getting help easier, the Federal Communications Commission has approved 988 as the new phone number to the national suicide prevention hotline.

The new three-digit number is designed to be as simple as dialing 911 for an emergency. Once established, the number will connect to the existing suicide prevention hotline, 1-800-273-TALK.

The National Suicide Prevention Lifeline, a network of 163 crisis centers across the country, supports the existing hotline, as well online chats for people experiencing suicidal thoughts. In 2018, the lifeline received more than 2 million calls and more than 100,000 online chat requests.

"The three-digit number is really going to be a breakthrough in terms of reaching people in a crisis," Dwight Holton, chief executive officer of Lines for Life, a suicide prevention nonprofit, told NBC News. "No one is embarassed to call 911 for a fire or an emergency. No one should be embarassed to call 988 for a mental health emergency."

The FCC conducted a study examining the potential benefits of adopting a three-digit number for the suicide hotline. Most people believed that the change would make it easier for people struggling with suicidal thoughts to get the help they need.

"More than 20 veterans die by suicide every day and more than half a million LGBTQ youth will attempt suicide this year alone," FCC Chairman Ajit Pai told NBC News. "A shorter, simpler suicide hotline number could be a game-changer."

According to ABC 7 Chicago, all telecommunication carriers and inter-connected Voice over Internet Protocol (VoIP) service providers will be required to make any needed changes to their networks within 18 months. The FCC will hold an open comment period before officially implementing the new hotline number.

The suicide prevention hotline is funded by the Department of Health and Human Services' Substance Abuse and Mental Health Services Administration.

The National Suicide Prevention Lifeline is available to anyone in crisis 24 hours a day, 7 days a week. Call 1-800-273-8255 or reach out via online chat. There is also a Veterans Crisis Line: 1-800-273-8255. All calls are free, confidential and directed to a trained counselor.