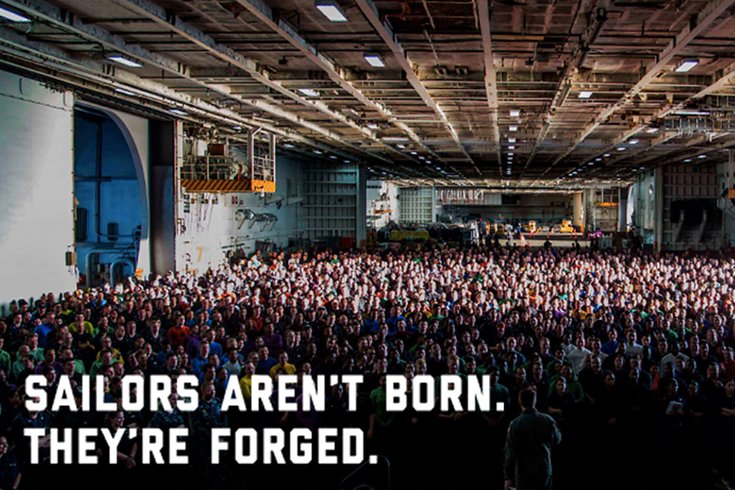 The U.S. Navy is launching a new tag line – ""Forged by the Sea" – as part of a branding campaign launched at future recruits.

Just in time for this weekend's Army-Navy football game in Philadelphia, the U.S. Navy announced Tuesday it was launching a new tagline.

"Forged by the Sea" will anchor a new branding initiative targeting a new generation of recruits.

The official launch at Saturday's game is just the first wave of an integrated marketing campaign that will include digital and social media advertisement during the winter, before a full rollout in March, according to Rear Adm. Pete Garvin, commander of Navy Recruiting Command.

“Sea to Stars,” the first in a series of commercials featuring the new tagline and branding, will air on CBS during the second quarter of the Army-Navy game, as well as on the large video screens at Lincoln Financial Stadium. A second commercial titled “Game” will also air in the stadium. (The new ads can be viewed here.)

The messaging will be in full force in and around the stadium on Saturday. The Navy Parachute Team, the Leap Frogs, will carry “Forged by the Sea” banners as they parachute into the game before kickoff.

“The Navy is now recruiting young men and women of the Centennial Generation, who have different goals, expectations, and media-consumption habits than their Millennial predecessors,” Garvin said in a statement. “As such, the Navy recognized the necessity to develop a new marketing campaign and digital-heavy media strategy to more effectively reach, educate, and inspire the best-and-brightest prospective recruits.”

The “Forged by the Sea” tagline was unanimously selected by focus groups comprising the Centennial target audience as well as enlisted sailors, officers, Navy veterans, and key influencers. The tagline effectively communicates that the Navy has evolved in response to the sea, and that sailors are tested and shaped by the Navy/sea experience, becoming better versions of themselves, a news release said.