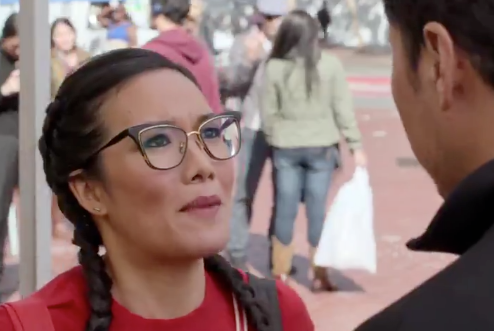 "Always Be My Maybe," which stars Ali Wong and Randall Park, will be released on Netflix May 31.

Wong and Randall Park ("Fresh Off the Boat") star as two childhood friends who reconnect as adults after a falling out 15 years ago. Sasha (Wong) is a celebrity chef in San Francisco while Marcus (Park) is a struggling musician working for his father. But of course, no rom-com is complete without some sort of mixup. The film will also star Charlyne Yi, Keanu Reeves, and Daniel Day Kim.

There's a serious '90s and '00s vibes in this new teaser, which is set to Mariah Carey’s “Always Be My Baby." It starts with Marcus attempting to get up the courage to tell Sasha he loves her before suggesting they meet up instead. Though, when these two finally do get together and Marcus is ready to come clean about how he feels, she announces she’s met someone who, she describes in graphic detail, gives her “the after shakes.” No word or taste of who this mystery man could be...but is it Keanu?

Wong is known for her two critically-acclaimed comedy specials for Netflix, “Baby Cobra” and “Hard Knock Wife." The film was written by Wong, Park, and Michael Golamco. Wong and Park both worked together on "Fresh Off the Boat." The two brought in Nahnatchka Khan to direct the film, who also serves as executive producer and writer for the ABC series.

"Always Be My Maybe" will premiere on Netflix and receive a limited release in theaters on May 31.