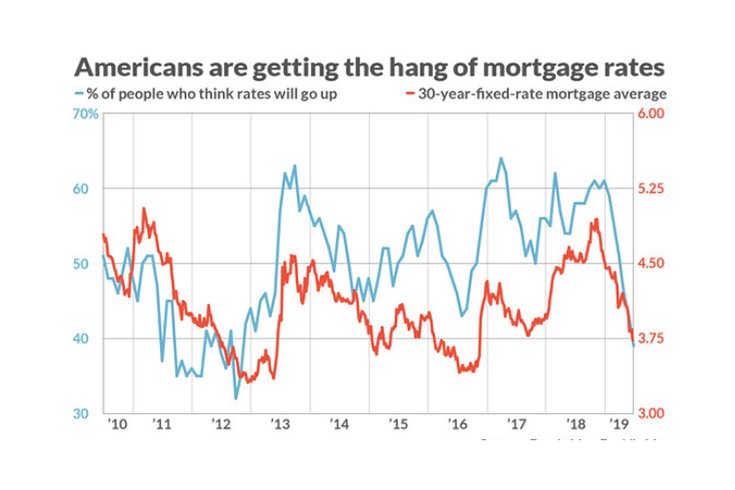 Over the first half of 2019, mortgage rates in the United States dipped to near-historic lows. Americans who were paying attention have reaped the benefits of refinancing, and there's now enough data to prove they have a good gut sense.

Mortgage liquidity provider Fannie Mae conducts a monthly survey in which U.S. citizens are asked a series of questions about the economy overall and the housing market specifically.

One of those questions is whether they expect mortgage rates to go up or down in the near future.

As MarketWatch noted recently, all of the survey data collected over nine years is beginning to show that Americans' expectations are becoming more accurate. They began to sync with actual mortgage rate adjustments in 2013, as demonstrated in the graphic above.

Since the question only asks "up" or "down," it is a bit of a simple metric. But that doesn't mean it's insignificant. Via MarketWatch:

Still, the track record is a bit better than the forecasts from “expert” economists and housing-market trackers. As a reminder, that group, as surveyed by MarketWatch last December, forecast that the 30-year fixed-rate mortgage would finally “lift off,” and average about 5.1% throughout 2019. So far this year, it has actually averaged 4.18%, down about 40 basis points from last year. Down, not up.

Mortgage rates are in a state of flux by nature, but we can rely somewhat on the winds of monetary policy to get a sense of where they might be going.

Since the general trend has been sharply downward during 2019, it makes sense that Americans are noticing the bigger picture and responding to the market accordingly. The opposite trajectory occurred in the second half of 2016.

If anything, the surveys show that Americans will be better prepared for changes and swings in the future.