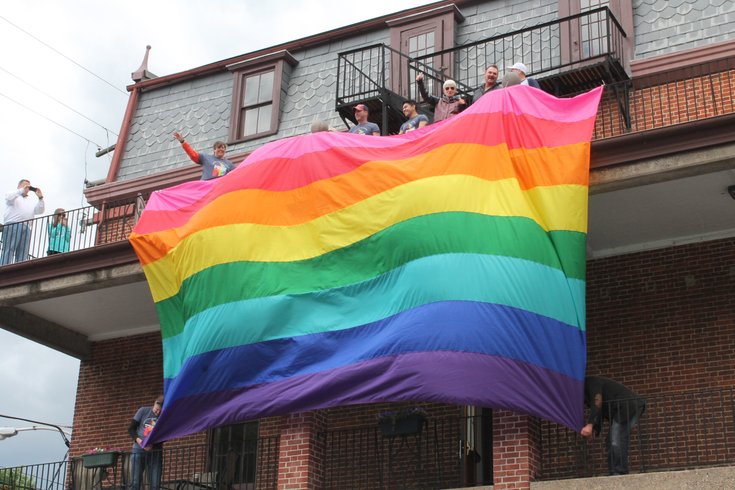 Though the lively sights and sounds of Philly Pride won't grace the Gayborhood until June 12, the region's summer-long season of Pride festivals kicks off in New Hope, Bucks County, this weekend — this year, bringing with it a rainbow flag that has a mission all its own.

The flag, to be hoisted atop Starbucks on Bridge Street for the duration of Pride, is a 15-by-20-feet rainbow design that features the original design's eight colors and was made by Old City-based Humphrys Flag Company. Rather fittingly, that operation is situated just across from the Betsy Ross House at Second and Arch streets in Old City.

The Humphrys design takes the place of the Key West Rainbow 25 Sea to Sea Flag — a once 1.25-mile-long rainbow flag created in 2003 by Gilbert Baker to commemorate his original 1978 design. That flag was cut into pieces to be used in LGBT-friendly towns like New Hope. Baker, of note, was the first to create a new symbol of the LGBT community since the down-facing pink triangle was introduced by Nazi Germany to mark gay men in concentration camps.

Gilbert's commemorative flag had generously been on loan to New Hope since 2004 and ended its run last year. Thus, New Hope Celebrates creative director Gordon Pulaski told PhillyVoice, it was time to start a new tradition.

"Basically, my goal with the flag is to make it travel — to have it go to Brazil or any one of the other Prides around the world, where New Hope will be represented," Pulaski said. "We’re involved with NERP, or Northeastern Regional Pride, and they represent all the Prides — 100 of them or more. But they also give scholarships to organizations like ours if we want to travel to Berlin or Amsterdam for one of the Prides.”

That flag will join a separate 100-foot flag being purchased for New Hope's 2017 Pride, Pulaski said.

Both will represent all eight colors, which is not necessarily typical of all rainbow flags. In order, from top to bottom, the colors represent: pink for sex, red for life, orange for healing, yellow for the sun, green for nature, turquoise for magic, blue for serenity and purple for the spirit. Collectively, they are intended to encompass the diversity of the LGBT community.

The flag will be on display throughout the New Hope Pride Festival, which runs May 15-22 with events at The Raven and the Eagle Fire Hall, among other venues, and includes a parade on May 21 that starts in Lambertville and crosses the bridge to New Hope.

New Hope is well-known for its rich LGBT history, derived from a thriving arts and theater scene, as well as its proximity to both Philadelphia and New York City.