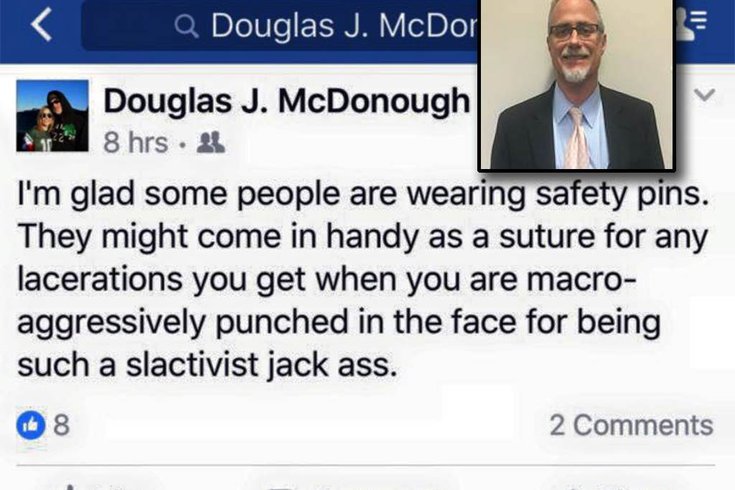 This Facebook post by New Hope-Solebury School Board member Douglas McDonough (inset), since deleted, infuriated many in the LGBT-friendly community. McDonough, who is being pressured to resign despite multiple apologies, said he was trying to shed light on whether simply wearing a pin sends the most effective anti-bullying message.

On Monday night, Douglas McDonough, a member of the New Hope-Solebury School Board, apologized for a recent Facebook post during an organizational meeting on Monday night. The post – since deleted – infuriated many community members who showed up at the meeting asking for McDonough’s resignation.

“I’m glad some people are wearing safety pins. They might come in handy as a suture for any lacerations you get when you are macro-aggressively punched in the face for being a slactivist jack ass.”

Quite a few parents and community members interpreted the social media post as a threat of violence against people who wear wearing safety pins to show solidarity with minority and LGBT groups in the wake of the recent presidential election.

Neal Dougherty, school board president, confirmed in an email that during the board’s Monday night meeting, members of the community turned out in numbers – 100, according to one estimate – to bring attention to the Facebook post. He said community members were permitted to speak during a public comment session in which they mostly criticized McDonough.

“Personally, I found the post to be insulting and indefensible,” Dougherty said.

And while there is a lot of public pressure on McDonough to resign, the board does not actually have the authority to remove him. McDonough, elected to a four-year term, has only served one year on the board.

“He alone will have to make the decision to resign,” Dougherty said.

McDonough, an attorney with Fein, Such, Kahn & Shepard in Parsippany, N.J., has been answering phone calls, emails and social media messages ever since the post was widely shared, and even after he deleted it.

He’s also made several apologies, explaining that he was motivated by “articles I had read about some liberal commentators lamenting that people are relying on wearing a safety pin to show activism,” he explains. “That got me thinking that with all the safety zones, micro-aggression warnings, safety pins and other insulating tactics that people might take, we will never solve any problems until we address the underlying issues of what makes one person hate another based solely on prejudices.”

“I am surprised and horrified by the reaction. I expected the reaction from people on my Facebook feed to get the satire and understand what I was trying to say." – Douglas McDonough, about his Facebook post

In hindsight, McDonough says he was not threatening violence at all, but rather trying to shed light on whether simply wearing a pin sends the right, most effective message against bullying.

“I was trying to say that despite wearing a safety pin, or being in a safe zone, there is nothing to stop some Trump deplorable from walking up to you and punching you in the face,” McDonough explained. “My intention was to point out that we need to identify solutions that end prejudice, and not rely on statements that are going to be ignored by the very people we are hoping to influence. My intention was not to incite violence, or condone or encourage it. I unequivocally denounce violence in any way, shape or form.”

The community response, meanwhile, has been powerful and, according to Dougherty, “compelling,” especially among students who showed “thoughtfulness, maturity and strength.”

“There are a million better ways to say what he wanted to say." – Angela Giampolo, Philadelphia attorney

Not everyone believes that McDonough was trying to send a positive message in this overwhelmingly liberal community. After all, New Hope has long been known as a very LGBT-friendly enclave in Bucks County, just about an hour’s drive north from Center City. Its reputation for being home to so many gay and lesbian families seems at odds with what some are calling an attack on their safety.

And this shocks McDonough.

Angela Giampolo, a Philadelphia attorney who has been working with New Hope officials for the past few years to make the community even more LGBT-friendly through ordinances to protect people’s right to work, live and marry, says she, too, was shocked by the Facebook post.

“There are a million better ways to say what he wanted to say,” Giampolo said. She believes the post was irresponsible, especially for someone elected to support the public school community.

“Kids just want to feel safe,” Giampolo said. “If you read that post, I immediately think that someone on the school board wants to lacerate my face with his fist. If I want a safe space, I certainly don’t feel safe.”

As a lawyer herself, Giampolo is perplexed that an attorney could send a message on social media that leaves itself open to so much misinterpretation. She expects there will be continued fallout over the post, especially considering other very public cases involving elected officials on social media.

Recently, a mayor in West Virginia was fired after she “liked” a comment made by the director of a county development corporation referring to First Lady Michelle Obama as an “ape in heels.”

There is increasing pressure on leadership to send a message about appropriate social media use and bullying, especially among school boards and educators.

As school board president, Dougherty says that the district must always come first in any actions or decisions he make as a director, either in public or private. The Facebook post has become “a burden on the district, the administration, the support staff, the school board, and worse yet, many students,” he said.

McDonough says he never intended to advocate violence or to mock anyone with the post, even though many within the community are having a hard time accepting his explanation. He has since received quite a bit of hate mail as a result, which strikes him as ironic.

"I am ashamed that my language has been seen as promoting the very actions I would never condone.” – Douglas McDonough

“On the one hand, people are saying I am promoting violence, I am the down-ballot politician emboldened by the Trump victory, I am a hate monger, I am Hitler, I am a douchecanoe, they are suggesting that my children should get punched in the face or I should carry a lot of safety pins to suture all the cuts I get when they get through with me,” he says. “People are saying I am a bully, and that I should not be exposed to children and I need to resign or be removed from the board due to my posting.”

He’s also found support among friends. “They are telling me my wording was terrible and in bad taste,” he admits, “but they understood its context and knew it could not be taken at face value.”

McDonough, who is weighing his options about whether to stay on the school board despite the mounting pressure to resign, would ultimately like to use this experience as a teaching moment. He says he’d like to turn it into “an opportunity to create real change.”

He has also offered another apology.

“I just want to apologize again for the hurt, fear, pain and division within my community, that my stupid, thoughtless Facebook post has created,” he said. “I never intended it to be interpreted this way nor disseminated like it has been. I realize that is no excuse and take full responsibility for posting it and making the poor choice of words. I am ashamed that my language has been seen as promoting the very actions I would never condone.”

Dougherty would like to see the issue addressed so the board can ultimately move on.

“The district needs to move beyond this painful episode,” he said, “and the board needs to focus on its core mission of helping educate our children.”