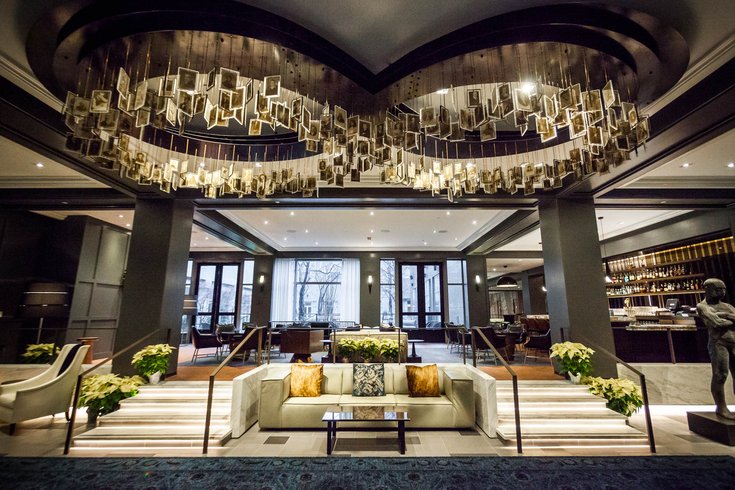 A portrait chandelier hangs from the ceiling of the lobby at the Logan Hotel. The art installation features over 400 photographs reprinted from the archives of the Philadelphia Historical Society.

A new luxury hotel that aims to be as artistic as the famous museum nearby has opened on Logan Square. But it's been left with large shoes to fill.

The Logan, which held its grand opening on Wednesday, has opened in the former location of The Four Seasons, an institution in the City of Brotherly Love for more than 30 years. That hotel shut down in June, with plans to reopen in 2018 in the new Comcast skyscraper.

After half of a year of renovation, a 391-room Logan has opened its doors, allowing visitors to once again enjoy luxury accommodations in a prime location on the Benjamin Franklin Parkway. Part of Hilton's "Curio Collection," the Logan markets itself as "Philadelphia's Hotel" and aims to project a chic, modern and – above all – artistic image. 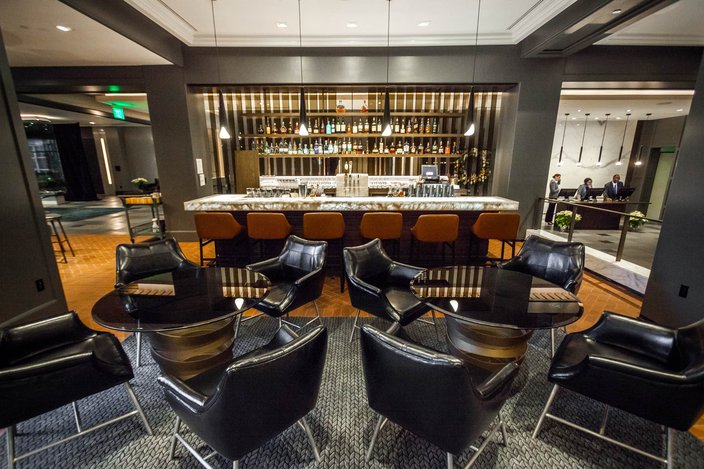 A hand-carved stone bar in the lobby lounge at the Logan Hotel. (Thom Carroll / PhillyVoice)

No doubt inspired by the nearby Philadelphia Museum of Art, the hotel is decked out with local sculptures and paintings. Amenities include a spa, a rooftop lounge with views of the Parkway and a luxuriant garden courtyard. In keeping with the green theme, 10 percent of room revenues will be donated to the Pennsylvania Horticultural Society from New Year's Eve until March 31.

For dining options, there's a cocktail lounge and a rancher-centric steakhouse called Urban Farmer. The menu offers options like a "steak tasting" with a flight of six-ounce New York strips, which may be the only thing in this world that's better than a beer tasting.

There's also plenty of space for galas and gatherings, with 12,700 square feet of meeting and banquet space and a grand ballroom for 500 guests. BLT Architects, Dawson Design Associates and Dash Design brought the building to life.

The first guest to stay in a suite, according to the hotel's Facebook page, was not a tourist but a business traveller: Kenneth Bacon, a member of the Comcast Board of Directors.