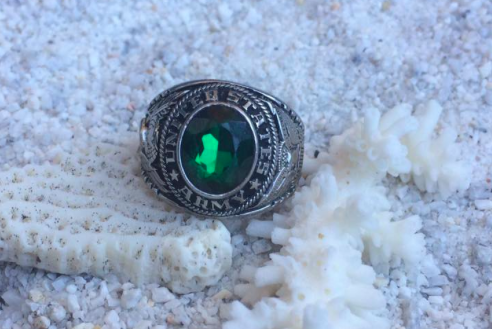 You know that stereotype about vagrants bumbling along the beach with a metal detector, hoping vainly to unearth a glistening fortune left behind? The same imagery Fat Mike from NOFX popularized in the song "Linoleum" off "Punk in Drublic?"

It turns out the whole sad portrayal of the beachcomber isn't really accurate, especially for the collector types who do it out of a combination of personal interest and public service.

"I have been Metal Detecting for over 30 years with many successful recoveries of items lost & returned to the owners including some of which have been posted on metal detector manufacturer websites and advertisements," Cropski says at his Facebook page. "I enjoy helping people who have lost something sentimental or valuable to them and then seeing the smile on their face when it is recovered and returned to them, it's priceless!"

Cropski's MX Sport metal detector may have picked up one of his more compelling finds to date last month when he recovered an Army basic training ring in Ocean City.

The image, according to ShoreNewsToday, has been shared more than 19,000 times on Facebook. Still, the ring's owner hasn't stepped forward to claim it. The only helpful clue is an engraving, "LTM," on the ring's underside.

Cropski says the ring appears to have been lost recently because it's in excellent condition despite a recent beach replenishment project at the north end of the shore. He's recovered hundreds of rings and claims to have returned dozens since he began searching for lost treasures.

If and when a rightful owner claims a lost item, Cropski typically charges a $50 fee for his travel expenses and accepts rewards only when they are offered.

The owner of the lost Army ring can contact Cropski on Facebook whenever they become aware of his discovery. Stranger things have happened. Last December, a 27-year-old man who lost his wedding ring in the ocean off the coast of Belmar got it back with the help of his friend from Seabright's Dive and Salvage.