Each of the 10 panelists who testified before the Senate Judiciary Committee supported the legalization of marijuana, a policy shift enacted by four states and gaining traction elsewhere across the country.

Committee Chairman Nicholas Scutari is backing a bill that could make New Jersey the fifth state to legalize marijuana, joining Alaska, Colorado, Oregon and Washington. But he acknowledged passing such a law will be a long process.

"Members of the committee needed to hear this information and have an opportunity to question the testifiers on the statistics," Scutari said afterward. "I could see that a lot of them were astounded by the statistics. Many of them remain open minded to legalization, there's no doubt in my mind."

Scutari, D-Union County, will reintroduce his bill with slight changes when the next legislative session begins next year. From that point, he said, it's a matter of raising support and garnering enough votes. But Gov. Chris Christie ardently opposes legalizing recreational marijuana.

"We have some convincing to do," Scutari said. "But these are legislators that are open-minded and need to hear more information. Today, we had mainly the people for (legalization). We're going to have an opportunity to allow people who are against it, although I really don't think those arguments are really based in science."

The legalization advocates who testified Monday included representatives from drug policy, medical, law enforcement and civil rights organizations. They sounded a consistent refrain, testifying that marijuana is less addictive than both alcohol and tobacco, easier for youth to obtain and incorrectly labeled as a gateway drug. 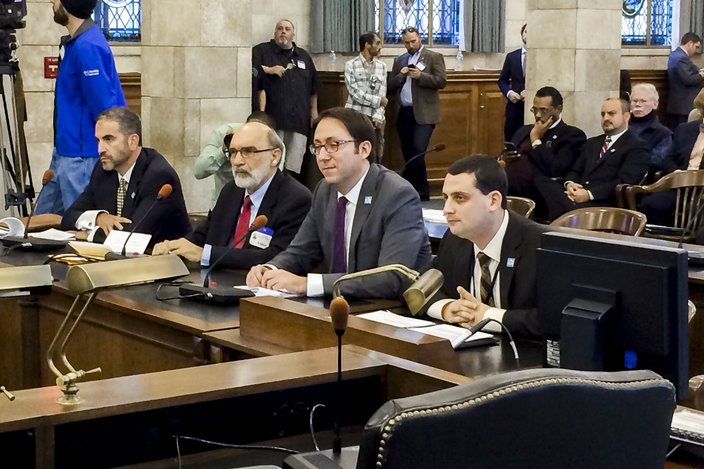 The advocates also repeatedly testified to the racial disparity among the individuals arrested for marijuana possession. Minorities are far more likely to be arrested despite using marijuana essentially at the same rates as white people.

Richard Smith, president of the New Jersey NAACP, decried that as an injustice that can be fixed through legalization. He also said regulating marijuana would make it more difficult for youth to obtain. Many youth say it is easier for them to obtain marijuana than tobacco or alcohol – legal products with strict age restrictions.

"The NAACP is not encouraging marijuana use," Smith said. "Marijuana is not healthy for all people and particularly young people. But our current system gives too much access to marijuana to young people. We need to move marijuana and marijuana dealers off the corner and put it behind the counter where it can be regulated."

Support for marijuana legalization has grown in New Jersey, according to a Fairleigh Dickinson University poll released in June. A statewide survey of registered voters found 49 percent favored legalization, an eight-point increase since the question was last posed in January 2014.

The Garden State is among 23 states that have legalized medical marijuana, though its law is considered among the most restrictive.

"Somebody is arrested for marijuana possession in New Jersey every 21 minutes," Ofer said. "All of these arrests take place despite the fact that a majority of Americans and a majority of New Jerseyans support marijuana legalization."

Sen. Joseph Kyrillos, R-Monmouth County, remained unconvinced, telling Ofer and three other panelists that he's not sure legalization is best for New Jersey.

"I am quite certain we could have as many people and more come in opposition," Kyrillos said. "We could probably have as many people come from Colorado who completely disagree with the characterization that I heard earlier that it's been a great experiment in Colorado."