Bought by a straw purchaser, weapons allegedly transported from Ohio to Camden 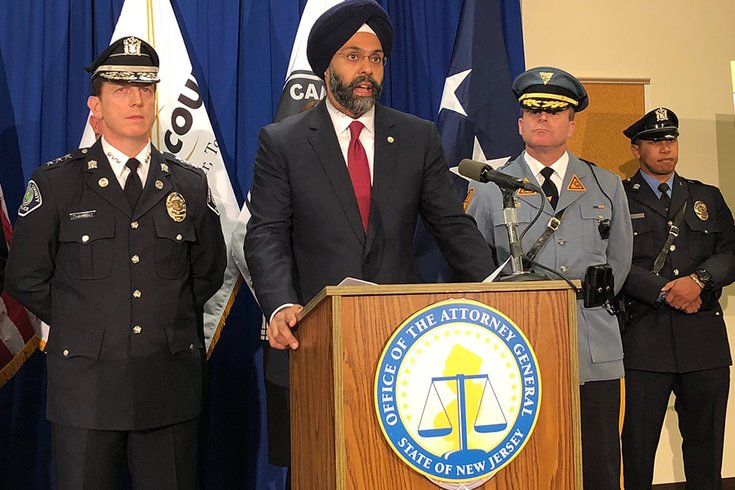 New Jersey Attorney General Gurbir Grewal on Wednesday details an interstate gun trafficking operation that brought a stream of firearms, including assault rifles, from Ohio to the city of Camden.

An interstate gun trafficking operation brought a stream of firearms, including assault rifles, from Ohio to Camden, according to New Jersey officials.

State Attorney General Gurbir Grewal on Wednesday detailed an operation that resulted in seven indictments, including an alleged straw purchaser in Columbus, Ohio.

From April 2016 until July 2017, at least 30 guns made their way from Columbus to Camden, authorities said. Seventeen weapons were recovered, including 14 handguns, two AK-47 assault rifles and an AR-15 assault rifle.

Several of the firearms were used in violent crimes, Grewal said.

"Unfortunately, the residents of this city are all too familiar with the misery that these deadly weapons can inflict when put in the hands of gang members, drug dealers and other violent criminals," Grewal said. "Camden has too many tragic memories to illustrate this point."

All seven defendants are charged with racketeering, conspiracy, transporting firearms into another state for illegal sale and money laundering.

Anthony Hammond, 26, of Columbus, allegedly served as the group's straw purchaser and helped Scott deliver some of the firearms to Camden.

Additionally, a group of five alleged middlemen – all from South Jersey – allegedly arranged to sell the firearms in Camden, officials said.

They are Eduardo Caban, 40, of Camden; Eric Moore, 47, of Camden; Tymere Jennings, 35, of Marlton; Darren Harville, 51, of Camden; and Jamar Folk, 33, of Camden, who also goes by Ibraheem Abdullah.

According to authorities, Hammond and Scott would go together to a gunshop in Columbus, where Hammond would purchase multiple guns at a time. Hammond also allegedly purchased weapons online.

Scott allegedly would text photographs of the weapons to his middlemen, who would find individuals in Camden to purchase the guns. Two of the alleged middlemen – Moore and Jennings – are Scott's cousins.

The middlemen would add a "tax" to the prices set by Scott, ensuring they also made a profit, authorities said. The assault rifles allegedly sold for as high as $2,000.

After receiving the orders, Scott allegedly would drive to Camden to deliver the guns to his middlemen, who typically paid for the weapons with cash. They also allegedly used money transfers.

"We cannot – and we must not – become complacent in our efforts," Grewal said. "These dangers will remain as long as criminals have the easy access trafficked by these seven defendants. ... We need to stop the flow of illegal guns into our state."

New Jersey has some of the nation's most-stringent gun laws, Grewal said. But he said it is too easy for criminals to gain access to guns in other states.

About 75 percent of the illegal guns recovered in New Jersey in 2016 were initially purchased in another state, Grewal said. Sixty-one of them came from Ohio.

Hammond was subjected to a brief background check at the point of purchase, Grewal said. But he was able to purchase an unlimited amount of firearms.

"My understanding is that there is not a limit on the numbers or the types of guns that you can walk out with from these stores that Mr. Hammond was going to," Grewal said.

"That's the law in that state. That's what led to the easy supply of guns being brought here to New Jersey and then being sold on the streets illegally."

Law enforcement officials uncovered the operation after several agencies learned Caban allegedly had been selling both firearms and heroin in Camden.

With the help of the Bureau of Alcohol, Tobacco, Firearms and Explosives, police determined Hammond originally purchased the guns.

Moore, Jennings, Folk and Harville were arrested after a grand jury returned their indictments to the Division of Criminal Justice on Feb. 6. Scott, the alleged ringleader, and Caban previously had been detained for other offenses.

Hammond, the alleged straw purchaser, is expected to surrender with his attorney, a Camden spokesman said.

The defendants each face a first-degree racketeering charge that carries a prison sentence of 10 to 20 years.

They also face two second-degree offenses – conspiracy and transporting firearms into another state for illegal sale – which carry a prison sentence of five to 10 years. They each face a third-degree money laundering charge that carries a prison sentence of three to five years.

"We are committed to putting an end to this iron pipeline of illegal firearms coming into this state," Grewal said.

Coleman faces a second-degree conspiracy to distribute heroin charge. The U.S. Drug Enforcement Agency allegedly recovered a kilogram of heroin and a kilogram of cocaine at his home.

Caban faces a first-degree conspiracy to distribute heroin charge for allegedly conducting multiple sales from May through August.