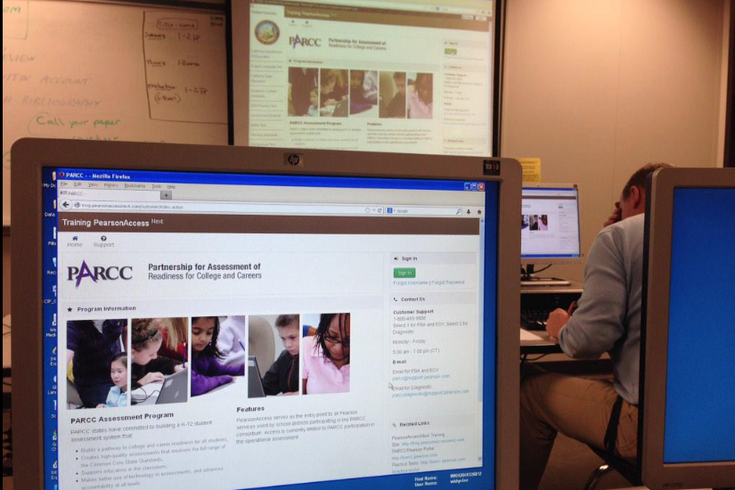 Read More
Next month, for the first time, New Jersey students in grades 3 through 11 will be administered a new standardized test developed by the Partnership for Assessment of Readiness for College in Careers (PARCC).

The test, which seeks to evaluate critical thinking skills and conceptual proficiency, reflects the Common Core curriculum linking state-level standards for education in the U.S.  PARCC is set to debut in 11 states this year, but as test time is quickly approaching in New Jersey, some parents, teachers and lawmakers want there to be an exemption, the Courier-Post reports.

"Adults who have taken the practice test online are pretty shocked by the way the questions are designed and worded," said Steve Baker, a spokesman for the New Jersey Education Association, the largest teachers union in the state. "They find them to be confusing, misleading."

PARCC, administered fully online, totals 10 hours of testing. While it will not be used as a determination of whether students pass their grade level, it may be used as an assessment of schools' and teachers' effectiveness in preparing students for Common Core material.

Last fall, at the start of the school year, NJ.com explored the controversy surrounding the implementation of Common Core and how opposition to it has united groups that are typically not in agreement.

At that point, support for Common Core standards had dipped considerably at the national level over the previous year. A Gallup poll taken toward the end of 2014 indicated that 60% of Americans opposed Common Core (despite almost two-thirds never having heard of it until the year before) while a Stanford University poll found 40% of teachers were against the standards, up 12% from 2013.

Democratic Assemblyman Patrick Diegnan of South Plainfield has proposed a bill that would allow parents a two-week window to notify schools of a wish to have their children be exempted from PARCC. The bill is a response to fears not only about whether the difficulty and length of the test is fair to students, but also about how the data will be used over the course of a student's progression through grade school.

"They're trying to track the children from basically preschool to college to their careers," said Jennifer O'Donnell, a Gloucester County parent who has started a Facebook group for other parents in her town who are wary of the test.

According to Academic Benchmark, 46 states have adopted Common Core standards, some states verbatim and other states with modifications. The massive undertaking, drawing in leaders in education from across the country, is still so new and so untested that it is likely premature to say whether its current implementation in different state settings will achieve the overarching goals it has outlined.

In those states where testing has already begun, however, the results have been less than favorable, the Washington Post reported last summer.

If negative experiences with testing next month are compounded by proof that the format of the test doesn't reasonably reflect the skill levels of students, then opponents of PARCC in New Jersey may gain significant ground. Until then, the test is scheduled and its intention in the short-run is to gauge where schools, teachers and students are performing well and where they need work.