New Year's resolutions for the Philadelphia Union – fans, media, and everyone else 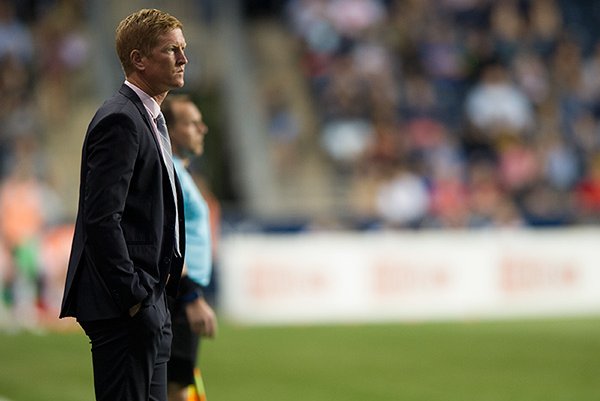 We'll wrap up the New Year's resolutions series by examining the people who don't set foot on the field.

Truth is, modern day Philadelphia is still relatively new to professional soccer, so everybody plays a role in molding a nascent MLS franchise into something bigger and better. There's always been an auxiliary responsibility to grow the game in a difficult sports market, whether we realize it or not.

In part one of the series, we covered Union goalkeeping and defense.

In part two, we talked about the Union forwards.

And in part three, the focus shifted to the midfield.

Strengths – internal cohesion, commitment to a style of play and defined set of tactics

Chris Albright was a rookie technical director with a relatively small Rolodex and even smaller budget. 35-year-old Jim Curtin went from second assistant coach to head coach in a matter of months. B.J. Callaghan was coaching in the Union academy. The team didn't have a general manager and the front office was wasting money on Rene Meulensteen as a consultant.

You're now looking at a more seasoned staff. They have a bona fide sporting director to guide a comprehensive and cohesive plan. Curtin installed a structure and style of play that resulted in the team finally beginning to carve out some sort of on-field identity. Callaghan has been able to devote time to set piece design. Albright has help with contract negotiations and budget business. It's a collective gasp for air after years of internal noxiousness.

That said, I still think the lack of tactical flexibility was a big reason for the late-season nosedive. Curtin stuck with the 4-2-3-1 for 35 straight games and then doubled down on that decision (with Stewart supporting him) at the season-ending press conference. My opinion was that the departure of Vince Nogueira and arrival of Alejandro Bedoya provided an opportunity to do some mid-season experimentation.

There are a lot of things that can improve. The subs can come earlier in the game. They can also be more impactful. Skilled players should be on the field even if they don't play as much defense as the hard-working American kid. There are ways to maximize the roster, even if the staff does not have the resources that other teams enjoy.

I don't think Curtin's decision making is infallible, but I also don't think he's going anywhere barring a disastrous start to this season. He just finished the national pro license program and the Union seem to be committed to him for the long term.

It took six years, but the Union finally look like a professional team. They have an academy, a training complex, and practice fields next to a beautiful stadium. Mercifully, the years of training in a public park are finally over.

This infrastructure was desperately needed, but the spending needs to continue.

Ownership took a step forward with the Bedoya record signing, which was the first seven-figure Union personnel deal. That was probably made possible for two reasons. On one hand, the completion of those infrastructure projects probably allows ownership to budget money in other departments. On the other hand, Jay Sugarman seems more willing to spend money under the guidance of Earnie Stewart. He just didn't seem to trust Nick Sakiewicz with the checkbook.

Now that you've signed a million dollar midfielder, you need a DP striker. You also need a veteran center back and a TAM-level number six. You need to do all of these things while continuing to grow the academy and promote from within.

It feels pathetic to sit here and tell millionaires how to spend more of their money, but they're the ones who bought into a professional franchise in a growing and competitive league. Toronto FC is spending millions of dollars on players while ALSO bringing in academy players, drafting well, and using free agency. Seattle won the MLS Cup on the strength of a mid-season DP acquisition. Atlanta United hasn't even played a game and their early signings rival seven years of Philadelphia personnel business.

It is what it is. I commend ownership for their commitment to smart spending and youth development, but money rules modern football. You can't market Keegan Rosenberry for a second straight year when other clubs are going out and signing Miguel Almiron, Nemanja Nikolic, and Alberth Elis.

Playing Moneyball is interesting, but it's not going to win you a trophy.

Strengths – commitment to the brand and fan experience, open to new ideas

Tim McDermott brought a boatload of ideas when he joined the Union front office last season.

When we sat down for a one-on-one interview, he reiterated his desire to incorporate fan feedback in improving the gameday experience. He bolstered the staff by adding a Senior VP of Corporate Partnerships, a VP of Marketing, and a VP of Ticket Sales and Fan Services. Those three executives had prior experience working for franchises like the New Orleans Saints, Indiana Pacers, and Under Armour, just to name a few.

That reinforcement also resulted in the promotion of three long-time front office members. Dave Debusschere, Dennis Carroll, and Craig Amhaus are guys who have been with Keystone Sports and Entertainment for nine, eight, and six years, respectively.

The club also added digital and content positions, bringing in Marisa Pilla as a Union "insider" and also recently posting openings for a Content Manager and Digital Video Producer. There are still some holes to fill from the 2015 changes, such as hiring a new manager to oversee community relations and Union Foundation business. The departure of Nick Sakiewicz lead to wholesale changes in the front office.

One of things that needs to happen, and I have no idea who is in charge of this, but there's still absolutely nothing to do around the stadium. The private parking lots are a blight and an obstacle, which has resulted in lawsuits between the Union and those property owners. McDermott has suggested that the focus is currently on gameday experience and less about those fringe topics surrounding the Union "campus."

When we spoke in July, he said this about those private parking lots:

Tim McDermott: I would tell you that we certainly have our eye towards those other pieces. If the opportunity presented itself for us to have more control of those other areas and those other parking lots, we would certainly do it. We would love to do it. I think controlling these other areas would provide us more of an opportunity to develop the region better. That is one thing that we would love to do. It's hard for us to develop this region and this footprint if we don't have that ownership or control.

Tim McDermott: Yeah. I certainly have an eye on that and I would love to get there. I think staying focused is kind of where I'm at, making sure that my focus right now is on growing the fan base, selling more season tickets, and improving the overarching brand experience...

The biggest issue with Union media coverage is that most of the guys who cover the team do so in a peripheral manner, which is to say that they have other responsibilities that come first, or they cover a variety of sports and topics.

One reporter, for instance, covers Temple, the Phillies, the Flyers, high school sports, and the Union. He makes it down to Chester for training once or twice a week.

Another reporter works full time on another website's sports desk, so he's limited to Wednesday press conferences via the conference line.

There is no full-time Union beat. This isn't the Philadelphia Eagles beat, where 100 writers work seven days per week at the NovaCare Complex and get to enjoy the free buffet, spots on local radio stations, and appearances on Comcast SportsNet.

I think we have good mix of storytellers, interviewers, and overall knowledgeable people.

That said, the small group of regulars creates an environment that, while friendly, has been relatively devoid of tough questions and deeper writing. We all know Jim Curtin on a personal level, which influences the way we write about him, whether we realize it or not. We see the same people and same players multiple times per week, for nine straight months. We can probably do a better job of being critical, but fair.

Also, Philly is a parochial and provincial city in many regards. Soccer has had trouble catching on in a town dominated by football and other sports. Philly residents are generally averse to new things, not necessarily because they dislike or distrust those things, but because they're comfortable with what they already have. You probably know someone who has vacationed in Wildwood for 25 years. It's not that they dislike Ocean City, it's that they're comfortable in Wildwood and they don't need to make a change.

In the same way, the Flyers fan might not dislike soccer, he or she just sticks with what they like.

Philly and Boston are both old-school sports towns, and each city's soccer team has had trouble gaining a foothold in the market. You're never going to hear Union talk on 97.5 the Fanatic, but they don't even talk about hockey or baseball these days anyway.

Soccer is a niche sport in a tough market, so the onus is on a smaller group of reporters to create interesting content.

Strengths – they started the team

I won't proclaim to know too much about the inner workings of the SOBs. I know there have been some fractures within the group as the result of some original members taking a step back while leadership undergoes constant fluctuation. There are different opinions as to how the group should proceed, who should do this, who should do that, what songs to sing, who is the best capo, and blah blah blah.

What I do know is that the River End isn't filling up, and that has to change. You can talk about the SOBs being the most important part of the fanbase, but the truth is that they only occupy about 15 percent of the stadium. The majority fan segment is still casual and suburban families.

There is definitely some erosion of enthusiasm when you watch a team consistently perform at a subpar level. Season ticket holders don't want to pay money to watch a team finish in 12th place. Maybe the original excitement of having a brand new club has also waned. There are understandable reasons for the malaise in hardcore support.

Whatever you have to do, get the River End looking like 2011 again. There's no scene in Philadelphia sports that looks better than a full supporter's section. It's natural, it's authentic, and it's creative. This isn't like going to a Sixers game and listening to piped-in arena music while staffers shoot hot dogs out of a Gatling gun. The Union experience is unique and fan-generated, and the SOBs have to be that driving force.

I do think there were concerted efforts to improve the tifo game this season, and the addition of mounting poles above that end of the stadium really helped. The River End just wasn't a great area to display tifo because it was narrow and didn't allow for rigging or simple vertical display. That's changed a bit.

Everybody has to up their game in 2017, from the coaches, to the fans, the players, the front office, and the media.