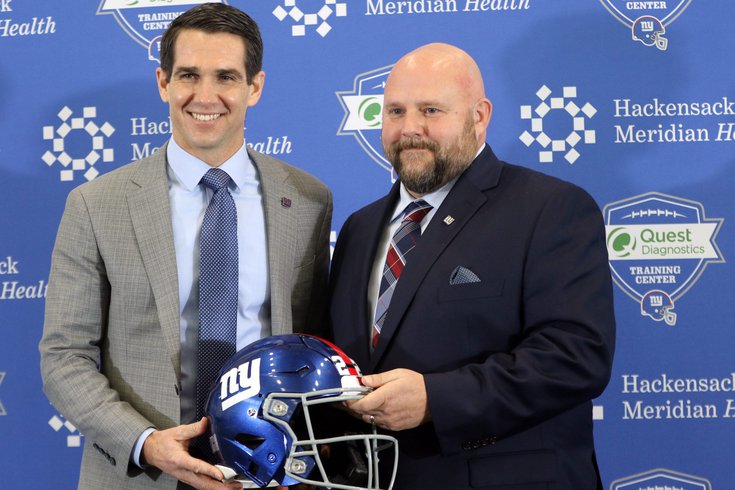 New Giants general manager Joe Schoen and head coach Brian Daboll hold a Giants helmet together as if it's their newly baptized child.

The New York Giants have become something of a joke in the NFL, as they are tied for a share of the worst record (22-59) in the NFL over the last half decade, with double digit losses in each of the last five seasons.

One of the major reasons they are now an NFC East doormat was former general manager Dave Gettleman, who made an absurd number of illogical roster moves during his four-year tenure. Gettleman didn't know what he was doing, frankly, and for some reason Giants owner John Mara continued to allow Gettleman to dig his franchise into bigger and bigger holes year after year.

Gettleman is finally out, but he left behind a team that was arguably the worst in the NFL by the time the 2021 season was over. Beyond the bad roster, the Giants were also left in atrocious salary cap shape.

After Gettleman's "retirement," the team hired Joe Schoen, formerly of the Bills, to run the show. He will be tasked with rebuilding a team that has hit rock bottom. Here's what Schoen has done so far:

• QB Tyrod Taylor (32): Taylor signed a two-year, $11 million deal to be Daniel Jones' backup. When Jones went down in 2021, the Giants were a train wreck with Jake Fromm and Mike Glennon at quarterback. Taylor at least brings some veteran competency to the Giants' quarterback room.

• OG Mark Glowinski (29): Glowinski scored a three-year deal worth $18.3 million. While I understand the desire to fix the offensive line, I'd be looking for players who can grow with the team as it begins its journey back from rock bottom. I would not be signing 30-year-old average starters like Glowinski (he turns 30 in May) who may or may not even be a great short-term fix, much less a long-term solution.

• iOL Jon Feliciano (30): Feliciano, who formerly played in Brian Daboll's offense in Buffalo, reportedly signed a one-year deal worth $3.25 million. It is believed that Feliciano will start at center for the Giants in 2022. Like Glowinski, Feliciano is on the older side, at 30. I can see some merit in adding a center familiar with what Daboll wants to accomplish offensively as a one-year Band-Aid, even if he's not a long-term fix.

• TE Ricky Seals-Jones (27): Seals-Jones was an undrafted free agent in 2017 who is now on his fifth NFL team. In 2021 with Washington, he had 30 catches for 271 yards and 2 TDs in 13 games (6 starts). He formerly played under new offensive coordinator Mike Kafka in Kansas City. If the season started today, Seals-Jones would probably be the Giants' TE1. Expect them to draft a tight end.

• RB Matt Breida (27): Breida is a good back when healthy, but he has struggled staying on the field, and has only had 85 carries the last two seasons. He'll back up the even more injury-plagued Saquon Barkley.

• DT Justin Ellis (31): Ellis played in Baltimore under new Giants defensive coordinator Wink Martindale. With just 0.5 (!) sacks in eight NFL seasons, Ellis is a run stuffer only, and an older one at 31.

• DE Jihad Ward (27): Another guy who played for Martindale in Baltimore. 10 career sacks in 6 seasons.

• OT Matt Gono (25): Gono has played in 21 career games, starting four. The Falcons placed a second-round RFA tender on Gono in 2021, but he later had shoulder surgery and spent the entire season on the PUP list. This is the type of younger lottery ticket player the Giants should be trying to find.

• WR C.J. Board: Backup receiver (4 catches in 2021) with some returner versatility.

• LS Casey Kreiter: Kreiter throws the ball through his legs to the holder on field goal attempts and to the punter on punts.

• TE/WR Evan Engram: Engram frustrated Giants fan with his frequent dropped passes, but he did show some talent at times a long the way during his five years in NJ. He signed a one-year deal with the Jaguars reportedly worth $9 million.

• DT Austin Johnson: Johnson was one of the Giants' competent starters in 2021, racking up 72 tackles and 3.5 sacks from his DT spot.

The Giants had some work to do to shed money from their bloated cap, and they cut the following players:

A bunch of these guys cost the Giants hefty financial and/or draft pick resources.

The Giants have the fifth and seventh overall picks in the 2022 NFL Draft, and nine picks overall. Ultimately, they need to hit on a lot of those picks if they're going to drag themselves out of the basement of the NFC. At some point, if Schoen can improve the Giants' cap situation, they can be players again in free agency. For now, their exceedingly boring free agency is understandable.

At the same time, however, there's nothing impressive or interesting about what they did. Of the 10 players listed above that the Giants gained, seven of them previously played for Daboll, Martindale, or Kafka. Leaning that hard into coach-player familiarity instead of casting a wide net to unearth hidden gems wouldn't instill a lot of early confidence in my new GM if I were a Giants fan.