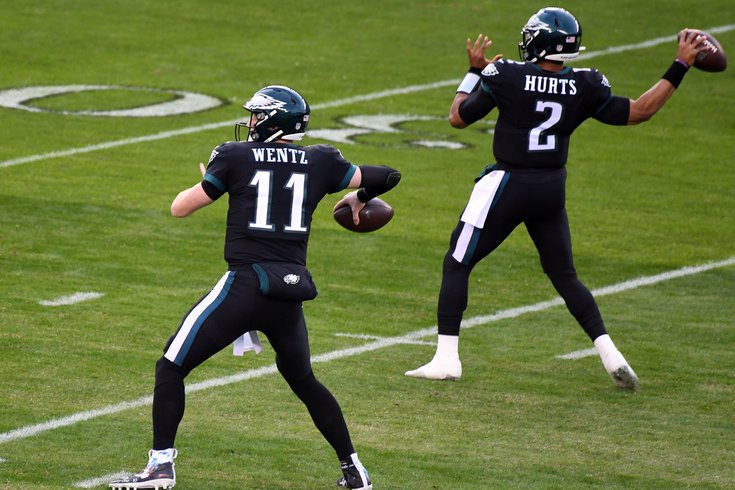 Jalen Hurts and Carson Wentz together on the Eagles in 2020.

This edition of the NFC East roundup is a little easier to write than most weeks given that we have two divisional matchups brewing. The most hotly anticipated game of the Eagles' season is on Sunday, as they travel to Landover to face former franchise quarterback Carson Wentz and the Commanders. Come Monday night, the Dak Prescott-less Cowboys will square off with the shockingly 2-0 Giants.

As part of the NFC East roundup, I'll take a look at the standings, preview the division's games this week, look at a couple of storylines and provide some news updates.

• That's a big spread for the Birds as a road team in a divisional matchup. I'm not advocating smashing the Commanders by any means, but home dogs are an archetype I'd always be looking to jump on.

• That Giants-Cowboys line feels pretty fair. I might have had it as a pick 'em. Is the 2-0 Giants squad really any good? Dallas has a good defense and Cooper Rush played well enough in Prescott's absence to beat the defending AFC champion Bengals last Sunday. I'm sure Eagles fans throughout the Delaware Valley were screaming at their TV as Cincinnati whiffed a chance to bury a limping team.

• The most obvious storyline is the biggest: Carson against his old team. Wentz was once handed the keys to the city in Philadelphia, viewed as the face of the franchise for the next dozen years and turned in an MVP-caliber season that was assumed to be a common occurrence for the foreseeable future. Wentz tore his ACL late in the 2017 season and his backup QB, Nick Foles, led the team to its first ever Super Bowl win and nothing was ever quite the same for Wentz. 2018 was rocky before Wentz went down with another season-ending injury and Foles once more saved the day. 2019 was uneven before a four-game winning streak to end the year propelled Wentz to the postseason for the first time. Then Jadeveon Clowney happened. 2020 was an abject disaster and he was off to Indianapolis the following March.

The further the Eagles got from Wentz's 2017 magic, the more issues that arose. Was he a bad teammate? Did he have zero accountability? Wentz said as much to reporters this week. Wentz has revenge on his mind, but don't discount the revenge that the Birds' current roster wants to exert against ol' No. 11. Jalen Hurts was drafted as injury insurance for Wentz. I can only imagine that the duo didn't have the world's greatest relationship. Wentz wants to out-duel the QB he was benched in favor of who's also generating tons of MVP hype this season. Hurts is a gamer and competitor and the same is likely true for him. The Birds' familiarity with Wentz on both sides of the ball could give the Eagles a bit of a leg up in a matchup where they already have the more talented squad.

• For the NFC East Monday Night Football game, I'm intrigued to see which of these teams is the least fluky. Can rookie head coach Brain Daboll actually lead the Giants to a 3-0 start? It would be the team's first 3-0 record since the 2009 season in which the G-Men began the year 5-0 before collapsing and missing the playoffs entirely. If Rush is able to weather the storm at QB for Dallas and carry them to a 2-1 record while leaning heavily on a stout defense, the Cowboys might survive without Prescott long enough to still be a postseason threat once their true QB1 returns to the field. As much as Eagles fans won't want to admit, a 3-0 Giants team is an obstacle in the Birds' pursuit of an NFC East title even if they might suck on a deeper level.

• New York sports media personality Chris "Mad Dog" Russo isn't buying the Hurts hype. Speaking on ESPN's "First Take" on Wednesday, Russo said, “Let’s take it easy with these proclamations. Eagles this, Hurts that ... They beat the Lions, and the horrendous Vikings defense, and all of a sudden now he’s Roman Gabriel. Let’s take it easy with the Eagles and Jalen Hurts.” (props to NJ.com for the transcription). I don't think a single soul alive has compared Jalen Hurts to Roman Gabriel, but you do you, Mad Dog!

• In a new ESPN story from reporters Time Keown and Nick Wagoner, 49ers quarterback Jimmy Garoppolo thought he was going to get traded to Washington this past offseason. With Jimmy G's medical situation foggy, the Commanders ultimately didn't make a deal and later acquired Wentz from the Colts.

• Giants wide receiver Kenny Golladay is upset about his playing time after getting just two snaps in the team's Week 2 win over the Panthers. This team definitely isn't combustible! No worries for you out there, Giants fans!