Day 3 NFL Combine preview: ILBs to watch who could interest the Eagles 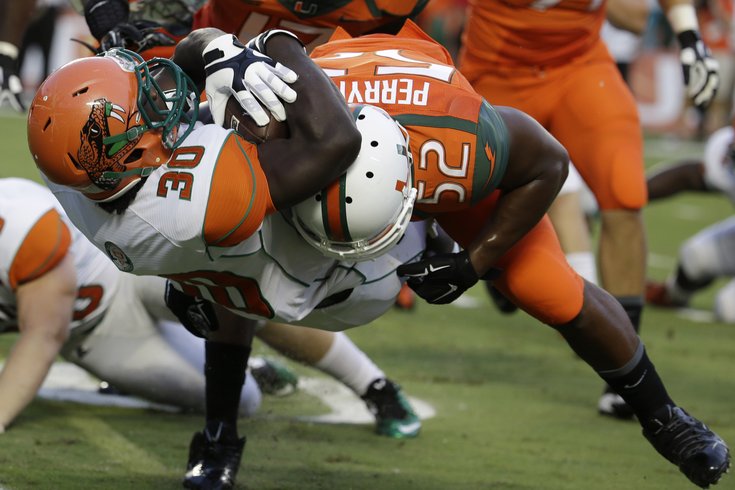 Miami's Denzel Perryman is a badass.

After two days of watching players on offense work out, it's the defense's turn. Here we'll look at inside linebacker, which is an obvious position of interest to Eagles with DeMeco Ryans' status as the starter opposite Mychal Kendricks in question. In case you missed any of our offensive previews, you can find them at the bottom of this post:

• Paul Dawson, ILB, TCU (6'0, 235): Dawson is excellent in coverage. Per NFL.com, he allowed just 35.7% of passes thrown his way to be completed. However, and this big with Chip Kelly obviously, he was reportedly a headache at TCU:

SOURCES TELL US "He's an early round player without any question, but you don't have to dig around very deep or very long to realize that his personal character is going to be a major issue for some teams. My grade will be two rounds later than just the talent grade. It has to be factored in." -- AFC West regional scout

"I'll make sure he stays alive in our building because he's that good." -- NFC national scout

Chip Kelly right hand man Ed Marynowitz was the Director of Player Personnel under Nick Saban at Alabama from 2008-2011, and will have deep intelligence on all Alabama players. Last draft, the Eagles liked Alabama ILB C.J. Mosley, who was taken by the Ravens before the Eagles could land him. With Mosley gone, DePriest piloted the Alabama defense in 2014. He's not the athlete that Mosley was, but is regarded as a very intelligent player and a thumper, almost like former Alabama ILB DeMeco Ryans, who the Eagles may need to replace.

The downside is that DePriest isn't the most athletically gifted player, and could be exposed in the passing game. He could be a good two down player in a league where the run game is making a comeback, but is a late round pick only.

• Taiwan Jones, ILB, Michigan State (6'3, 245): Jones is a big ILB who can hit, but like DePriest, is probably only a two-down linebacker because of his lack of quality cover skills.

• Eric Kendricks, ILB, UCLA (6'0, 232): He is the brother of Eagles ILB Mychal Kendricks. We covered him at length earlier this offseason:

The Kendricks brothers play the same position, and have nearly identical size. Like Mychal, Eric has impressive athleticism. He can cover, he can blitz, and this season he was a tackling machine, leading the Bruins with 145 tackles, or 58 more than any of his teammates.

Kendricks could immediately serve as quality depth and possibly more depending on how well DeMeco Ryans returns from his torn Achilles tendon. However, drafting Kendricks would give the Eagles a pair of undersized linebackers in the middle of their defense, and I wonder how comfortable Chip Kelly and Billy Davis would be with that.

Benardrick McKinney, ILB, Mississippi State (6'4, 246): McKinney has outstanding size at 6'4, 246, and some versatility in that he could also potentially be used as an outside linebacker in a 3-4. He would probably be a sure-fire top 15-20 pick 15-20 years ago. However, there are questions of how well he can play in space, which is where linebackers can be exposed in today's NFL.

Perryman doesn't have good size, which is doubly concerning for a team like the Eagles who already appear to have a long-term starter in Mychal Kendricks, who is also short. However, Perryman plays big. He a physical tackler who explodes through ball carriers.

Perryman spoke with the Eagles at the Combine. He can thump.

• Shaq Thompson, ILB/S/RB, Washington: Thompson was the Eagles' first round pick in my first mock draft of the offseason:

At the pro level, because of his smaller size, there will be debate about whether Shaq Thompson is a 4-3 WILL, or if he's a safety, or if he can play ILB in a 3-4. What is not up for debate is that he's a ridiculous athlete who makes plays. He's fast, he's agile, he's a sure wrap-up tackler, and is thought of as a high character player with good instincts. He was even a very intriguing running back at Washington. Some teams value "tweeners" like Thompson. Other will struggle to figure out where he fits in their scheme. But just look at what this guy can do.

Could the Eagles find a way to use Thompson creatively if he were to be available at 20? On the one hand, this will be the Eagles' third year in Billy Davis' scheme, so they'll be much further along than they were two years ago. On the other hand, we're talking about a defense here that didn't even have a dime package until last offseason. Still, the way I see it, Thompson is simply too athletic to pass on even if he may not have perfect measurables for any specific position in the Eagles' scheme. Just go get him and watch him make plays.