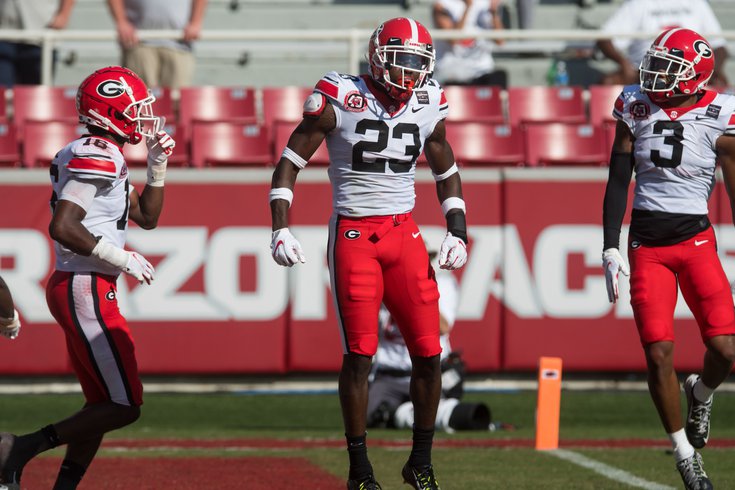 Georgia Bulldogs defensive back Mark Webb (23) celebrates with his teammates after a safety against Arkansas.

In his very first college game as a true freshman back in September of 2017, Mark “Gator” Webb saw time at wide receiver for Georgia. A look around and for one of the rare moments in his life Webb didn’t feel comfortable on a football field. His cringing face shouted so loudly that Bulldogs’ coach Kirby Smart heard it.

The next day, Webb was in Smart’s office talking about a change of position and a new status, moving to defensive back. It meant Webb would have to start at the bottom of the depth chart and work his way up. It meant learning a new position in a new area of the field.

After his first collegiate game, the 6-foot-1½, 208-pound 2017 Archbishop Wood graduate found himself at a critical crossroads: Stay and start again, or transfer out to another school where he could play wide receiver, a position he was touted to be ranked No. 25 nationally by ESPN coming out of Wood.

Sometime this weekend, Webb’s name may be called in the seven rounds of the NFL Draft, which begins Thursday night and will see Webb’s former Wood teammate, Kyle Pitts, go among the top five selections.

Webb is happy he stayed.

“It was difficult at first, in the learning aspect of things, but I had gurus like Kirby Smart and Mel Tucker, our defensive coordinator at the time, put me through complicated situations that made the games on Saturday way easier,” Webb said. “Going from offense to defense, that was a huge transition, but it’s something I had to do.

“It was a grind, both physically and mentally. It was definitely a new world. But Georgia is a top-tier school, which means playing for a nationally championship, so you do anything you can to get on to the field. I just wanted to play.”

Webb had always been a star player. Ironically, that’s the special position Webb eventually came to play at Georgia, STAR, which for the Bulldogs is an amalgam of safety and cornerback in nickel packages.

Last season, he played in eight of 10 games, starting in three, and made 21 tackles, including a career-high nine in a victory over Mississippi State. He had an interception against Auburn, and really helped himself in the Senior Bowl, playing for the American squad and making five tackles.

"I’ll admit that it’s not easy starting from the bottom. But I liked the challenge. ... That’s just the fire inside of me, and it erupted right then and there." —Mark Webb

Webb could have left Georgia, and no one would have blamed him. But he showed patience and character that some NFL scouts have noticed in how willing Webb was to do anything for playing time.

“I’ll admit that it’s not easy starting from the bottom. But I liked the challenge. I wanted to take it head on, and the way I was raised, you grind and you work for what you get. This was a dream, to be on this big stage at Georgia. That’s just the fire inside of me, and it erupted right then and there.”

Stepping back, Webb says the experience made him a better player and a better person.

“I found out when things aren’t as perfect as you would like them it makes you a man,” said Webb, who is represented by Andre Odom and Athletes First. “It helps you deal with things, because everyone goes through life being denied sometimes. You don’t look at outcomes at first, but look at where things could go.

"There’s no way I was going to run from that.”

Webb admitted he had to change his mindset. He was used to catching the ball his whole life. He found receivers were trying to do to him what he used to do to defensive backs.

“I found out that you can’t stop everything, because I used to get really angry every time someone caught the ball around me,” Webb said. “If someone caught a two-yard hitch, I hated it. But you learn to get over it fast.

“I knew I was going to come out on top in the end.”

Webb could be a third-day pick in the fifth or sixth round. His Pro Day workouts at Georgia, coupled with his performance at the Senior Bowl, may have changed his status. 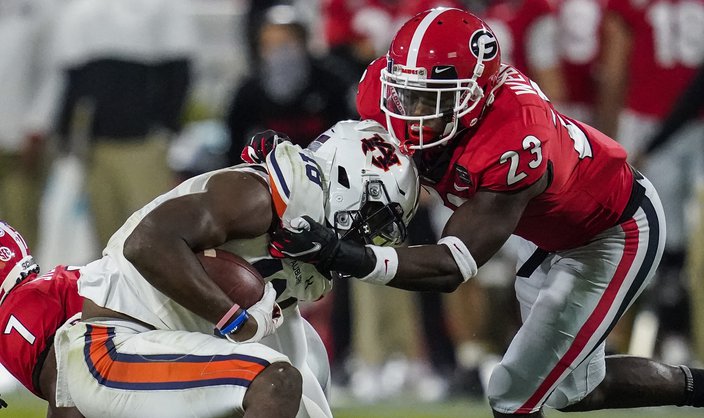 “Of all the DBs, Mark Webb looked the most fluid,” said Jim Nagy, a former NFL scout who now serves as the Senior Bowl executive director. “Mark really helped himself out. People who think Mark Webb is a late-round pick are mistaken. He has position versatility.

“He’s still relatively inexperienced at the DB position. Plus, Mark is a great kid who interviews well. Mark is one of those guys who could be a better pro player than a college player.”

Webb carries 3.1 GPA and is 8 credits short of receiving a bachelor’s degree in housing management and policy. He didn’t take off from school during his Pro Day and Senior Bowl practices.

“It was rough to keep with things academically, but that’s important to me and my family that I graduate,” said Webb, who’s heard from Denver, the Los Angeles Chargers and the New York Jets. “Let’s see where things go. I feel good about this weekend.

Webb will have his phone on and treat the weekend like any other.

Either way, whether he’s drafted or not, you have the sense Mark Webb will be on an NFL team in the fall.

RELATED: Philly is starting to get a reputation as a football town — and it has nothing to do with the Eagles