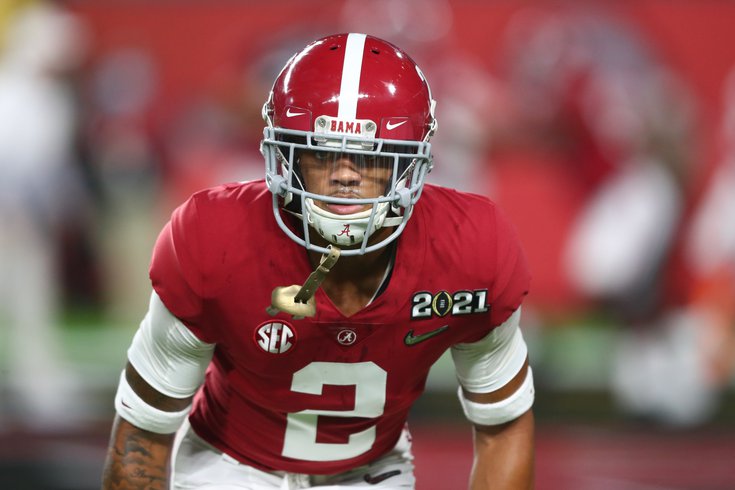 Over the last four months, we've checked in on various mock drafts to see who the national guys/gals were projecting the Philadelphia Eagles to take with their first-round pick. Here, we'll take a look at who the local guys say the Eagles will pick.

Disclaimer: Normally, we provide commentary on each Eagles blurb, but in the interest of pacing my myself this weekend, we'll skip that here.

"I already wrote about how the Eagles shouldn’t talk themselves out of Smith if he’s available at No. 12. The weight concerns are overblown. This is a player who hasn’t had durability issues and regularly excelled at getting off press coverage in the nation’s top college football conference. The Eagles have never successfully drafted and developed a wide receiver under Howie Roseman. There’s a good chance Smith is a solution to their long-time problem at that position. Smith can line up at multiple positions in Philly."

"Smith is my favorite college player from the 2020 season. He posted gaudy statistics and the game tape was equally impressive. Whatever Smith did, he did well. Good receiver. Good blocker. Good on special teams coverage. Good punt returner. Smith lacks ideal size, to put it mildly. He’s not a dynamic athlete. What he is…a damn good football player. He is a smooth route runner who knows how to get open. He has great hands and incredible body control. Smith combines ability, skill, brains and an ultra-competitive spirit.

"Smith would be a terrific addition to the Eagles receiving corps. Beyond that, he’s also the kind of guy you want when you’re trying to turn a team around. He is the kind of foundational player that a new coaching staff wants to work with."

"Howie Roseman drowns out the noise, listens to his scouts, and takes the dynamic Heisman Trophy winner."

"Hey, he might be better than Surtain in the long run. Great athlete. Needs better discipline with his hands. There’ll be a lot of comparisons to live up to for whoever is drafted here, which is one reason why I think the Eagles might move up."

"Waddle is only 5-9, but Howie Roseman loves those little guys who can fly."

"The Eagles could be wary of going with a first-round receiver in consecutive years, but shouldn’t overthink it here. Smith is one of the best prospects in the draft. The Heisman Trophy winner could become a true No. 1 receiver. Jaycee Horn is in play here as well, but there are plenty of opportunities in later rounds to add a CB2, which isn’t likely as high a priority for a defense transitioning to more Cover 2 looks."

"The Eagles traded back from No. 6 to 12 and still manage to land one of the top prospects in the draft. Surtain is a technically sound lockdown corner with the size (6-foot-2, 208 pounds) to get physical at the line of scrimmage and against the run, and the speed (4.46 second 40-yard dash) to stick with receivers down the field. The addition of Surtain will be music to the ears of defensive coordinator Jonathan Gannon, a former defensive backs coach who is expected to put a heavy emphasis on the secondary. Surtain, the 2020 SEC Defensive Player of the Year, will slide right in as the starting corner opposite Darius Slay."

"My guess is the Eagles will be in position to land one of Smith, Jaylen Waddle, Patrick Surtain Jr. or Jaycee Horn at No. 12. If Smith is available, the Heisman Trophy winner would be a strong pick for a team that has not enjoyed the return on investment needed from their rookie receivers. I went back and forth between Smith and Horn at this spot; any of the four would be a good outcome for the Eagles."

"As Zach said above, if the Eagles stay at No. 12, the pick should be one of four players: Horn, Surtain, Waddle or Smith. I think they will consider moving up to No. 9, which would probably cost No. 70 and something else, in order to draft Surtain before he can get to the Cowboys. If Ja’Marr Chase falls within their range, that could necessitate another trade-up conversation. And if Horn and the three Alabama players are all off the board, the Eagles will hope to trade back a few spots.

"In this scenario, both Horn and Smith are available and the Eagles pull the trigger on Horn. The decision is defensible, given Smith’s size limitations and the empty cupboard of young cornerbacks on the roster. Horn has the kind of aggressive play personality sure to attract Nick Sirianni, and he would step in as a day-one starter opposite Darius Slay. But you probably want your cornerback to be more of a factor in forcing turnovers than Horn has been if you’re going to use such a high pick. Horn only had one interception in college. In this scenario, Howie Roseman will pray that Smith doesn’t end up haunting the Eagles like DK Metcalf and Justin Jefferson have over the past two seasons."

"Howie Roseman has his choice of Devonta Smith or Jaylen Waddle at No. 12, but the Cardinals call looking to move up. They offer a fifth (No. 160) this year and a third next year so that they can take Waddle. The Eagles take the deal, hoping that Smith falls to 16. He does not. They debate Paye (6-foot-3, 261 pounds) and South Carolina CB Jaycee Horn at 16 and ultimately land on Paye. Derek Barnett and Josh Sweat are free agents after the 2021 season, and Brandon Graham will be 34 going into 2022. Roseman decides he needs to restock the cupboard at defensive end."

"There seems to be a good chance that Smith is on the board when the Eagles go on the clock. If he is, they should jump at the chance to get him.

"Smith is a lot like LSU’s Justin Jefferson last season. He has great hands, is a great route runner and has dominated at the highest levels (and biggest stages) of college football. Like Jefferson, Smith has one issue everyone is focusing on, and it seems to be impacting his draft stock. For Jefferson, it was that he played in the slot. For Smith, it is his weight. Jefferson overcame those concerns and was the best rookie receiver in the NFL last season.

"Both Howie Roseman and Nick Sirianni made it clear this past week that they are willing to overlook Smith’s small stature. If they do, Smith can be the consistent, game-changing receiver they have spent the last few seasons looking for."

"This would be an ideal way for the board to go for the Eagles. They have their choice of the top corners and DeVonta Smith. In this case, the clear choice to me would be Surtain. He’s the top cornerback in this class and has a high floor and high ceiling. I’m convinced he’s going to be a good pro. He’s technically sound, athletic and has a huge football IQ. I know there’s a debate about the value of corners in Jon Gannon’s defense but don’t overthink this. Value lines up with need here."

"With Waddle, Chase and Surtain off the board, do the Eagles take a risk on Caleb Farley’s health, Jaycee Horn’s production or DeVonta Smith’s size? If this is the scenario, I could see Howie taking the closest to a sure thing left on the board in versatile monster offensive lineman Rashawn Slater. The Eagles’ offensive line is aging and injury-prone, and Slater gives them a stud who’d be ready to play at a high level on opening day."

"Everyone is defaulting to CB or WR with Jaycee Horn the favorite to land in Philly but circumstance has Rashawn Slater falling further than expected and Howie Roseman can't resist."

"When the Eagles traded back with Miami to go from No. 6 to No. 12, they did so with the expectation that five quarterbacks would be chosen in the top 10, leaving the Eagles with one of seven non-QB picks.

"Smith, who won the Heisman Trophy last season while racking up 1,856 receiving yards for the Crimson Tide, would be a great addition to a wide receiver core without a true go-to guy.

"The Eagles should use this pick on either Smith or Alabama teammate Jaylen Waddle rather than a cornerback. That's because they need a difference-maker at wide receiver more than a lockdown cornerback as long as Slay is on the team."

"This is the simplest pick here, right? Smith was fantastic for the Crimson Tide last season with 117 catches for 1,856 yards and 23 touchdowns en route to winning the Heisman Trophy. There are some questions about his size, but don’t overthink it: He’s a playmaker, and the Eagles desperately need playmakers."

"A draft-night twist: This is a trade back up the board to get ahead of the Cowboys and select arguably the top defensive player in this lottery. It also tells you how they feel about Hurts at QB, with plenty still on the board."

"In 2019, Smith led Alabama in receiving yards and TDs, despite playing alongside a pair of first round picks in Henry Ruggs and Jerry Jeudy.

"Smith is a smooth route runner, he gobbles up yards after the catch, he has great hands, and he can make spectacular catches in traffic. The concern that teams are going to have about Smith is his lack of size, at a rail-thin 166 pounds. Can he beat jams at the line of scrimmage against big, physical corners? Can he be durable? Certainly, he plays much bigger than his slight frame.