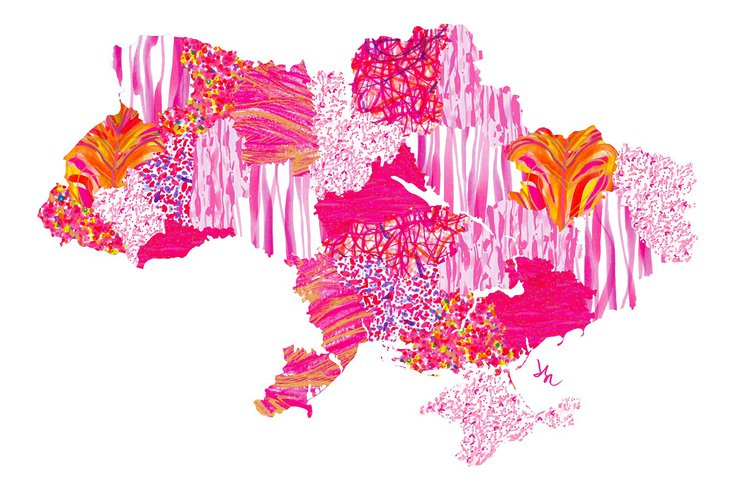 One of Dori Desautel Broudy's piecez that will be auctioned off this month. It shows a map of Ukraine's boundaries as they existed before the 2014 Russian seizure of Crimea.

Non-fungible tokens may only exist virtually, but that doesn't mean they can't be converted into real-world support for humanitarian efforts.

Dori Desautel Broudy, an artist and lawyer who moved to Philadelphia from New York, is auctioning off 17 NFTs from April 15-29 to benefit those impacted by the war in Ukraine. All of the proceeds will be donated to charities working near the war zone, including World Central Kitchen and Save the Children.

The collection was inspired by the conflict and was crafted mostly with different shades of yellow and blue to represent the colors of the Ukrainian flag. They display pacifistic symbols like the bird of peace, hearts made of human hands and flowers.

Broudy also has two pieces that are maps of Ukraine's boundaries as they existed before 2014, which is when Russia seized the Crimean peninsula.

The buyer of each piece will receive a gallery-quality acrylic block version of the image and an artist statement.

“For me, it’s not only cathartic to draw, but as a mother I needed to do something to show my own children that I’m taking proactive steps to demonstrate support for the struggles the Ukrainian people are undergoing right now," Broudy said in a press release.

The entire collection can be viewed on OpenSea, the site on which the auction will take place.

NFTs are digital assets which are similar to cryptocurrencies in that they are encrypted through a blockchain – a hard to hack digital transaction record that's linked across several computers. However, each individual NFT is completely unique and functions as a piece of property rather than currency.

Broudy's series is titled "For Sam" in honor of her childhood friend Samantha Smith, who wrote a letter in 1982 when she was 10-years-old to Soviet Premier Yuri Andropov about her concerns regarding the possibility of a nuclear war.

Smith and her family received an invitation to travel to the Soviet Union, which they accepted. That's when she became known as "America's youngest ambassador." Smith continued her work around the world until she died in a plane crash in her native Maine at just 13-years-old in 1985.

“She reminds us that no child chooses war, that kids everywhere ultimately hope for the same things – happiness, unity, with the expectation of safety," Broudy said.