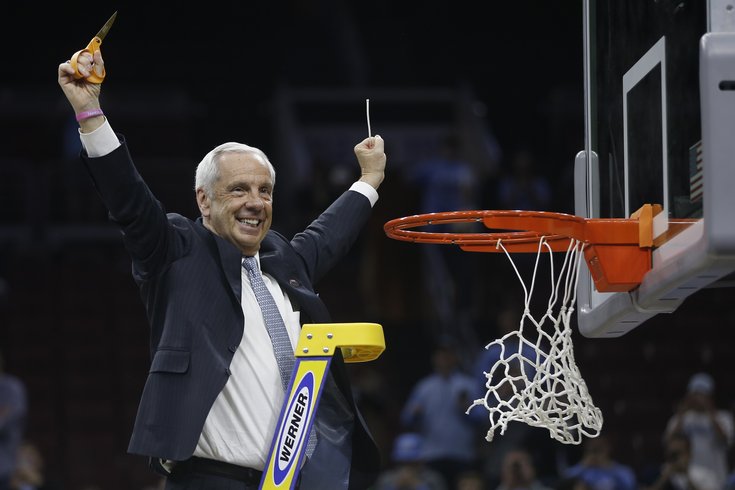 There will indeed be a No. 1 seed playing in the Final Four next weekend after North Carolina held off six-seed Notre Dame, 88-74, to win the East Region and secure a trip to Houston.

For much of the night, the game was closer than the final score might suggest but in the end, Brice Johnson and the Tar Heels proved to be too much for the Irish on Sunday night in front of a UNC-heavy crowd at the Wells Fargo Center. Johnson, who finished with 25 points and 12 rebounds, was named the Most Outstanding Player in the East Region; he also had a double-double (20 points, 10 rebounds) in his team's win over Indiana in the Sweet 16.

For North Carolina and head coach Roy Williams, it's their first trip to the Final Four since 2009, when they beat Michigan State in the title game. They'll face a fellow ACC team next weekend when they square off with Syracuse, who upset Virginia earlier Sunday.

Here's more on how the Tar Heels were able to advance – and a look at some other things about the game...

•    Notre Dame shot 55.1 percent for the game and was 9-of-18 from three, but still lost by 14 points. That's because North Carolina shot even better, finishing at 61.5 percent for the game (but just 4-for-13 from three). Both teams shot the lights out in the first half especially and started the game a ridiculous 22-34 (64.7 percent) combined from the field. By the time halftime hit, those numbers had only dipped slightly (61.2 percent) and the two teams had combined to go 10-for-16 from three.

•    Demetrius Jackson and V.J. Beachem were a big part of the reason Notre Dame was able to stay in the game, especially early. They scored 22 of their team's first 29 points, including this...Zach Auguste just can’t even…

It was just too much for Zach Auguste…

Jackson, who really seemed to enjoy playing in South Philly and could be a potential draft target for the Sixers, finished with a game-high 26 points (10-16 FGs) and Beachem added 18 of his own.

Jackson finds Auguste, who finds the bottom of the net and a foul! #Elite8 https://t.co/S3cb075wWr

•    That run was capped off by a technical foul on UNC’s Brice Johnson, which led to two Notre Dame free throws and a bucket on the ensuing possession to give them their first lead of the half at 52-51.

Bigger than the two points Johnson essentially handed to the Irish with the technical foul was the fact that he picked up a personal on the play that led to him getting T’d up. That put him up to three fouls for the game and sent him to the bench for a little over five minutes. As it turned out, the Tar Heels were just fine without him, as they answered the Notre Dame run with a 12-0 run of their own, all with Brice Johnson on the bench and capped off by this…

In fact, their best offensive stretch of the night probably came in the 10 minutes following the technical on Johnson.

UNC has scored on every possession since the technical foul. 13 straight.

•    Notre Dame would hang around the rest of the night, trading baskets with UNC for much of the rest of the game. However, the Irish never really threatened again. The Irish cut it to eight at one point, but that was about as close as they got.

•    St. Joe's Prep grad Steve Vasturia had a better game than he did on Friday, but I'm sure he would've preferred the win instead. He finished with 11 points, 3 rebounds and a pair of assists in a team-high 39 minutes.

•    Chris Christie at the game again and seemed a little more into it this time around. However, there was no sign of his leftover M&M’s from Friday. 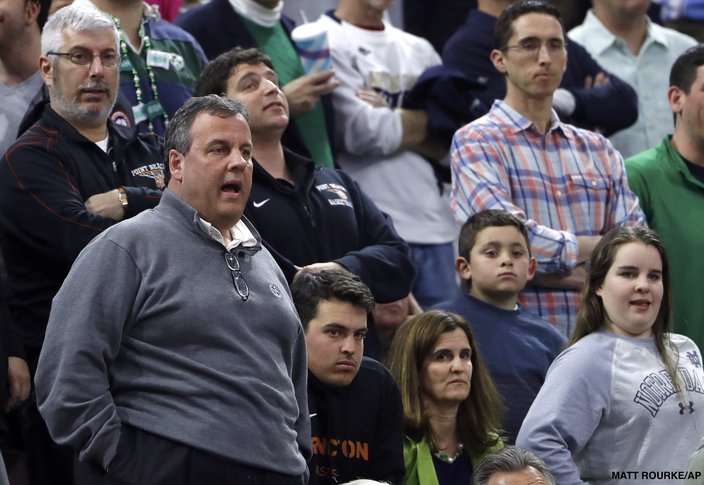 Rasheed Wallace was also back at the Wells Fargo Center to cheer on UNC.

•    You might not be able to tell by the picture at the top of the post, but despite the huge huge grin on Roy Williams’ face, he was actually in some pain. You’d think he would be used to cutting down the net at this point in his career. Apparently, not so much…

Roy Williams cut his finger while cutting down the net. His response: "I've really got good-looking blood. It's very bright."